'Visiting my friend in his affluent locality, I realised that the Delhi weather had become the great equaliser.'
'Pollution was always in the air, everywhere, and had become the primary subject of all conversations,' notes Ambassador B S Prakash.
Illustration: Uttam Ghosh/Rediff.com 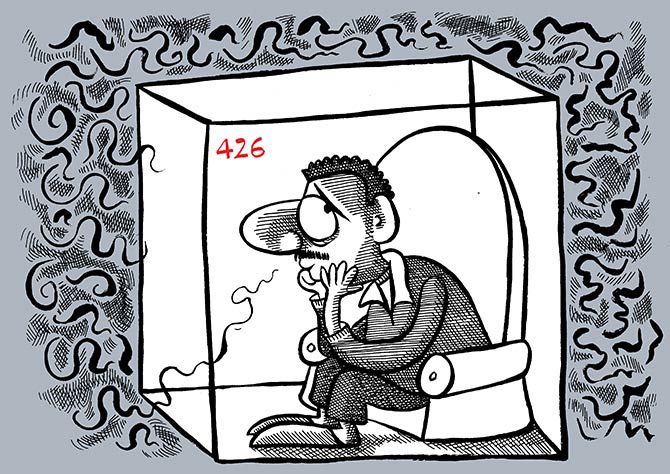 In the plush drawing room, my friend, the business magnate sitting on his pristine white leather sofa, looked distracted.

As he absent mindedly flicked some grey specks from the sofa, he glanced at the oval meter in the room that showed the air quality index. It read '426'. He sighed and looked at me despondently.

We were inside his luxurious home in Vasant Vihar, one of the elite and super-rich colonies in Delhi. I took off my face mask and carefully folding it, sat down.

Though we were old friends, the trajectories of our lives had become different. He had risen in business as I advanced in the bureaucracy.

Following the inevitable dharma of Indian social classes (or reaping the results of our respective karmas), he had his home in Vasant Vihar even as I retired into our flat in a cooperative society in the middle class parts of Delhi.

I now recalled my earlier visits to his place in winters of yesteryears. No, I am not talking of pre-Partition years, as some Delhiites are inclined to, not even of the Emergency period, but of the nineties.

I recall the small but verdant park in front of his home: Chirping birds on leafy trees, nannies taking babies for a stroll in prams, drivers chatting peaceably while playing teen patti; the winter sun slowly burning the mist.

I lived in an area where the air-quality was deemed 'poor' though we did not have that terminology then.

Black soot and swirling dust is the view that I got outside my windows; the din of the extension work of the Delhi metro was the morning raga that I listened to, and the smell of the burning dry leaves in the neighborhood completed my sensory experiences.

Visiting my friend in his affluent locality now, I realised that the Delhi weather had become the great equaliser.

Pollution was always in the air, everywhere, and had become the primary subject of all conversations.

Gloom and doom seemed to be a common mood, irrespective of the status and stratification that characterised the city.

"I had done so much to build our lives here; to insulate ourselves from the chaos and dirt around us..." my friend was saying.

"The usual. This is a gated community, as you know. These are independent homes, but no one can come in beyond the gates or park without permission. We are paying for everything. The generator provides full back-up and runs all the five air conditioners in summer and the oil heaters in winter. I got the lift installed for my mother to get to the third floor. And now the wretched authorities have put a ban on use of diesel generators, can you believe it..." he lamented.

As the chai was brought in, he looked wistfully at the garden outside which looked smokey. Both of us turned nostalgic remembering the countless occasions when hot pakoras and samosas had been savored sitting in the winter sun.

"Look, you mingle with all the NGO and academic types who keep talking about what has gone wrong with Delhi? So, tell me, what are the causes and is it ever going to get better?" he asked me.

"Difficult to say, there are so many causes, but so many steps are being taken apparently," I replied cautiously.

"What steps? Explain it to me," he demanded.

"Why is it so difficult to solve the problem, if so, many are trying?" he asked. Legitimately, I thought.

"Perhaps, because there are so many," I had to say.

Actually, there were multiple reasons for the bad air, I told him and they were being addressed by different agencies.

The Supreme Court had passed laws on vehicles, diesel, crackers during Diwali, ban on construction, suspension of power plants, and a few other subjects.

The police and the enforcement agencies were so confused and overwhelmed by the strictures, rules and requirements that they spent most of the time in coordination meetings. Their to-ing and fro-ing and running to the courts had increased the traffic jams.

"What about the stubble burning that I keep reading about? Why can't they ban it?" He was indignant.

"That is a whole different can of worms," I replied, mixing up my metaphors. "First, we have to recognise the politics of it. The Aam Aadmi Party controls the Delhi government, the Congress, the Punjab government, and the BJP, the Haryana sarkar. Obviously, the ministers or officials of these three do not talk to each other while attending the meetings."

"The Congress and the BJP controlling neighbouring states cannot be expected to help the AAP. I am not even talking about the Center!"

"Then comes the economics: the cost of stubble cutting machines vis a vis match boxes to burn them and incentivising the farmers to opt for the former by paying subsidies for the machines."

"Then comes the timing and wind direction, the natural factors, so to say. TV stations are always looking for experts to make it all intelligible, but it is a complex issue and..."

"OK. What else are you getting done now that you are forced to spend some months here in winter?" I asked.

A serious entrepreneur, he was always trying to change his reality.

"I have tried everything. The house is completely sealed and the maids have been instructed never to open any window. I got four air purifiers, the latest Japanese technology, but am looking at German options. I got a small Honeywell air purifier for the car as well."

"Of course, we got the branded face masks imported and I have told the kids to wear them to school. But with all that, what to do, the air does come in..." He was inconsolable.

"Are you thinking of relocating?" I asked, a question that I had started hearing frequently in Delhi social circles.

I had become -- let me admit it -- envious of others talking about the Bengaluru option or the Goa option nonchalantly. These were the ones who till yesterday debated between parking their money in equity or real estate.

"With all that is going on with the banks, it is so difficult to move money, to do anything. That is my worry,...".

"Don't worry too much. In a few years some Punjabi businessman will start delivering tankers of clean air to your home. As they do with clean water in Gurgaon. Or maybe clean air will be piped like gas," I said facetiously.

For a moment, he brightened, but when he realised that I was joking, his mood turned sombre.

"Well, relocation, then. Let me see who turns up tops at the CBI," he said mysteriously.

I did not dare ask him, why.

Ambassador B S Prakash, a retired member of the Indian Foreign Service, is a long-standing Rediff.com columnist whose columns can be read here.