'The Kashmir issue has become internationalised after nearly half a century.'
'India, not Pakistan, has done so pro-actively,' says Shekhar Gupta. 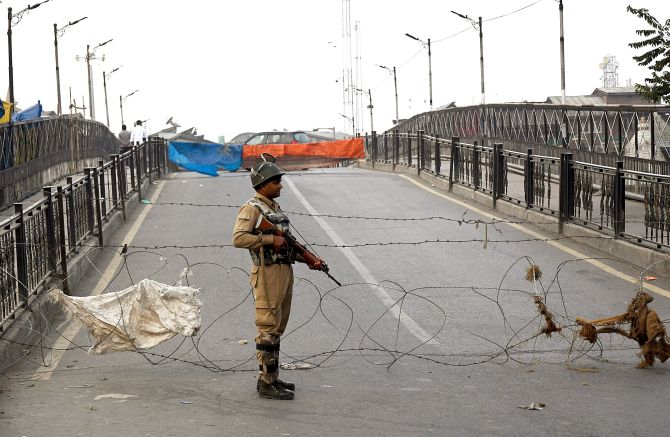 Does the world care about Kashmir?

They know that it is part of the subcontinent, over which India and Pakistan keep trading blows, mostly at a level inconsequential to the rest, and only occasionally ratcheting it up to the nuclear-threat level so everybody has to go scampering searching for an atlas.

Each significant nation, by now, has its own equivalent of what might be a spiral-bound primer of Kashmir FAQs.

Donald Trump might not be the best example. Not when he is supposed to have famously asked what is 'Button' and 'Nipple' (for Bhutan and Nepal) in the course of a briefing on the subcontinent.

Still, his comment at his July press conference with Imran Khan, where he described Kashmir as this most beautiful place where bombs were going off all over the place, was significant.

He has a mind uncluttered with detail, and institutional memory and his GK aren't exactly the UPSC level.

In that comment, therefore, he made it evident that the first time Kashmir figured 'bigly' on his mind was when Pulwama happened in February.

That, if you check back the records, was the only bomb of some size to have gone off in Kashmir for almost his entire tenure yet.

What does this tell us? That from India's best strategic and political interest, no news on Kashmir is good news.

In the 30 years since this round of insurgency began in Kashmir, the only time the issue caught the world's conscience was in 1991-1994, when P V Narasimha Rao launched that unforgiving counter-insurgency, and got every international human rights organisation and the first Clinton administration furious.

He put down that trouble and then made some amends, essentially to assuage global opinion by opening up Kashmir to international media, and setting up his own National Human Rights Commission in 1993.

Since then, his effort was to let Kashmir slide to the back-burner.

Otherwise, he played down Kashmir as a strategy.

He said it, weaving his finger in the air as if writing an arithmetic sum, including the two parallel lines at the bottom and indicating the 'net' between them. That's only as far as he would go.

Over the decades after the Simla Accord, Indian prime ministers, including Atal Bihari Vajpayee, pursued a strategy of playing down Kashmir. All questions about Pakistan, including during the near-war situations (Kargil, Op Parakram), were limited to terrorism. Kashmir was never allowed to become the issue.

For a long time, this had worked neatly. Even when the Pakistani 'Miltablishment' got its mojo back after 9/11 as the Americans returned to pamper them, there was no talk of Kashmir.

If at all, the US and allies counselled calm on Pakistan even if it got restless. They didn't want the distraction.

On the other hand, India mostly used the new situation deftly: Keep your spoilt child in control, or don't blame us if we ruin your plans which entirely depend on Pakistan.

Three consequences emerged. First, the world started to believe that the two countries had found their strategic balance, and troubles will remain at the tactical level.

Second, that Pakistan, with its doddering economy, and India, with a booming one, had both acquired a new vested interest in the status quo.

And third, that the two countries were progressing towards accepting the Line of Control as the real border.

A formal settlement, to borrow the words Deng Xiaoping famously spoke to Rajiv Gandhi, could be left to a wiser generation.

In fact, among the most significant lines I had heard in the course of my coverage of the Kashmir crisis of the early 1990s had come from then US assistant secretary of state for South Asia Robin Raphel, who was seen here as hostile. Soon after her remark questioning the Instrument of Accession had caused a storm, she had said somewhat philosophically, 'Kashmir is only India's to lose.'

India under the Modi government has made a departure from his predecessors' serendipitous Kashmir strategy and broken the status quo.

It follows, that the onus now is on Pakistan to threaten war. Which it did for some time, but gave up. It saw its military limitations, and nobody in the world was amused.

Please check out that video clip of Imran Khan's press conference in New York, where he asks in exasperation: So what else can we do besides what we are doing? We can't attack India.

So far so good. Then, complications begin.

Accept it or not, the Kashmir issue has become internationalised after nearly half a century.

India, not Pakistan, has done so pro-actively.

If you take a partisan view, it is encouraging for India that no country barring China and Turkey has contested its position that the August 5 changes were its internal affair or demanded a return to the pre-August 5 status. But the picture is far from perfect.

Enough countries, including the US, are concerned about what happens in Kashmir next.

Nobody believes Imran Khan when he says there is a genocide going on.

Neither does anyone take much comfort in drone pictures of Srinagar showing 'normalcy'.

The valley is seen as being under a draconian lock-down and thousands detained without charges or trial, and global patience with this will soon run out.

The UN week is over. There will be celebrations of “diplomatic victories” and how Pakistan was isolated.

On balance, Narendra Modi returned from New York with more positives than negatives.

India's old 'Kashmir is our internal affair' line has by and large gone unchallenged.

Trump, even in the White House readout of his meeting with Modi, asked him only to restore normalcy and fulfil his promises to the Kashmiri people, not put the clock back to August 5.

But rather than isolate it further, the new turn in Kashmir has given Pakistan a chance to return to global attention, playing victim and underdog.

If Kashmir being acknowledged as India's internal affair is a diplomatic achievement at the end of this particularly acrimonious version of the annual India-Pakistan tu-tu/main-main in New York, the key to its future and India's supreme national interest also lies here. It is now two months since the communication lockdown.

It has already gone on for too many weeks too long. The delay in opening up is increasing the Kashmiri anger.

The longer it takes, the graver will be the danger of a blow-out, violence, and bloodshed. Such situations can often go out of control.

The world is not reacting to Kashmir, but it is now sensitised.

To that extent, the issue has been internationalised.

In 2016, at least 40 persons were killed in the week following Burhan Wani's killing. Now just one death, of teenager Asrar Wani, is a matter of contention.

The global limelight is now on Kashmir. It will be perilous to take the post-August 5 lockdown to be the new normal or the new status quo.