The diary of a traditional Indian wife

'Odd thing: Parliament says this marital rape thing doesn't apply in India, but official reports say that 97 per cent of women are raped by people they know and intimate partners. Hmm. But that means… That means... Can it be true? Oh god' 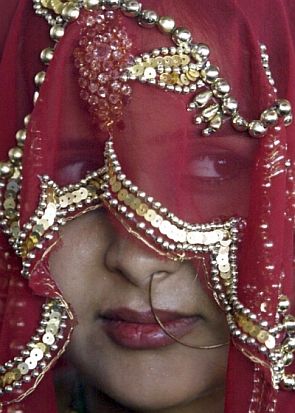 Woke as usual, giving thanks -- before I am even fully conscious, that is how thankful I am -- that I have a husband, and therefore a place in Indian society.

Turned over and looked at the hairy back I have woken up next to for four years.

Sometimes, waking up to this view makes me want to stick a knife between his shoulder blades, but when that happens I quickly do some pranayama, as our ancient culture counsels, and the feeling passes. (Don't understand it. Indian marriage is a sacrament. Maybe I have a vitamin deficiency?)

What would I do without Hairy? I would have no kids, I would be a shell of a being, a waste of social space.

My spirit, my mind, my friends, my interests, my job -- all meaningless. Feeling thankful all over again.

The minute Hairy wakes up, he expects me to be kneeling by his bedside with tea and biscuits, so if I want a few minutes' peace I have to be as quiet as a mouse.

Saw some hoo-hah in the headlines about something called marital rape.

Hairy and I have talked a lot about rape, he is very progressive and totally outraged by it as I am.

He has never mentioned marital rape, so it is probably not even a thing, so I ignored it.

He says the pseudo-sickular atheist gay West is always making stuff up to try and make India look bad.

That woke Hairy, who wanted to get busy straight away.

I said no, have to feed the kid.

These days he wants to get busy a lot because the kid is a girl and he wants a boy.

He's not as responsible as I am about feeding her when she's hungry.

I tried to get out of bed and he wouldn't let me.

I said stop it, but he didn't, and it turned into what we call a 'marital scrape'. I hate when that happens.

I could hear the kid wailing throughout, which made me very distressed, in addition to being in pain and furious and humiliated.

Hairy did say 'Sorry, but' afterwards.

He always does, and I always want to kill him, except that he's my god and my sun.

I wrote down "Indian marriage is a sacrament" 50 times on a piece of paper and then ate it, so that he won't know that I have to practise when doubt creeps in.

Dropped the kid off at the in-laws' place.

Pa-in-law is still winking annoyingly at me about a second baby.

Pran chacha was also there, who once tried to kiss me in the corridor. Obviously I told Ma.

She told me to never mention it again.

I gather that there was some funny business between Pa-in-law and Dharma's daughter once too, nobody talks about that either. Bottom line, it's understood that nobody is in a position to point fingers or get judgmental.

Very odd thing: Parliament says this marital rape thing doesn't apply in India, but official reports say that 97 per cent of women are raped by people they know and intimate partners.

Hmm. But that means... Hang on just one goddamn second. That means... Can it be true? Oh god.

Indian marriage is a sacrament.

Hairy and I need to have a conversation.

Hell, Parliament and I need to have a conversation.