'Why exclude those who are curious about our faith but not born into it, to experience the temple?' asks Aakar Patel. 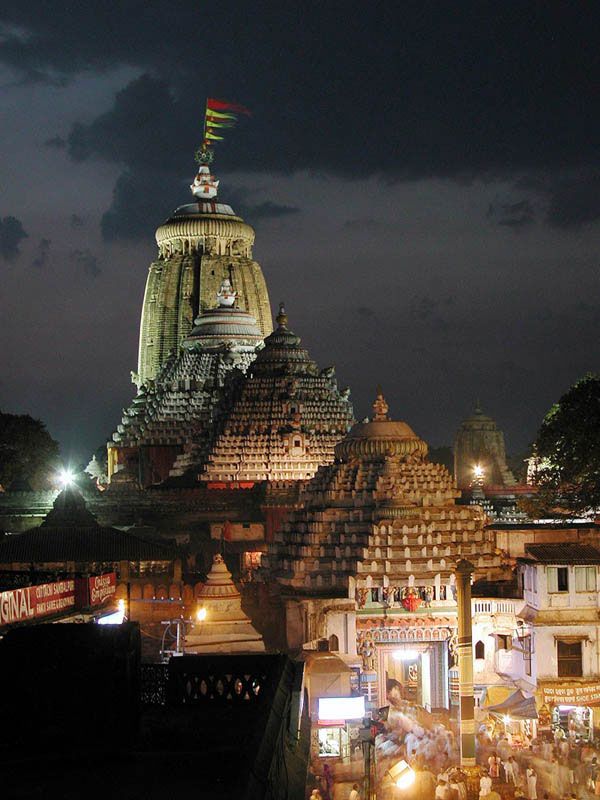 Duryodhan is a common name among Oriyas and so is Dushashan. I did not know this till visiting Bhubaneswar and Puri, where I am this week to see the great temple of Jagannath.

I usually go to these places because their history and architecture I find fascinating. And to discover that India is not uniform culturally though it may appear so from the outside.

The idea that a parent would name their son Dushasan, considered a villain of the Mahabharat as we have been taught, would be astonishing in Gujarat or anywhere else in India.

Clearly the Oriyas are an interesting people, with a cultural depth that many of us who only encounter them working very hard in blue collar jobs, have not penetrated.

On this trip, I have taken along my mother-in-law's family, who are Bengali Brahmins and more interested in worship than I am.

I have no particular problem with god, but I already have been given so much that it is embarrassing for me to ask for more, and so I don't.

A board in many languages outside Jagannath's temple says that only Hindus are allowed. I confess I do not understand what the logic of this is.

Churches do not have this rule, including in the most famous one, the Vatican, which I have seen and whose artifacts are displayed with pride.

The Saudis do not allow non-Muslims into Mecca, though we are told that Guru Nanak once made the pilgrimage.

In Lahore some years ago, I visited the gurdwara of Guru Arjan with local friends and a board outside, probably put up by the government, said that Muslims were forbidden from entering.

We ignored it, and when the Sikh caretakers asked us who we were my companions did not lie.

The child born to my local friends had been named Arjun and when the Sikhs learned that they insisted we leave the boy for them to play with while the rest of us saw the gurdwara.

In India mosques and churches and gurdwaras are open to all, and I would encourage Hindus to visit the inside of their local mosque.

They will be welcomed and they will find it rewarding, whether or not they are interested in Islam.

Why exclude those who are curious about our faith but not born into it, to experience the temple?

It cannot be because this is what the Hindu scripture insists on because if it were true then all temples would have this rule, which they don't.

However one notices that increasingly, the major temples exclude foreign tourists and non-Hindu Indians.

This year, I saw such a board outside the sanctum sanctorum at the Meenakshi temple in Madurai and also at Pashupatinath in Nepal.

The great singer Yesudas, born Christian, has consistently been denied entry into temples like Guruvayoor where he wants to sing bhajans.

He will be allowed into the Padmanabhswamy temple on September 30 after giving an affidavit that he believed in Hindu customs.

One explanation for this exclusion could possibly be that because Hindus do not convert, they are entitled to leave out those communities who do. But this is difficult to prove.

The fact is that temples have always excluded people, especially other Hindus.

Gandhi went on a fast in the 1930s because the Swaminarayan sect's temples (run by my community of Patidars) did not want the lower castes to enter.

In fact the Swaminarayan sect tried to present themselves in court as a minority, non-Hindu community rather than agree to the lower castes' entry.

So could this prejudice about caste purity be the reason why our temples are kept exclusive? I hope not.

Jagannath's Pandas famously prohibited Indira Gandhi from entering though she was born Hindu and was cremated a Hindu.

In 2012, it was reported that Jagannath's Pandas put up a board reading 'only orthodox Hindus allowed'.

I did not see this particular sign, but it is a puzzling one.

Orthodox Hinduism is purely about the varna system, which the Constitution specifically forbids us from practising through Articles 14 to 17.

Only if one follows the varna system (meaning that one practices untouchability and accepts that Shudras should not be taught the Veda) is one orthodox.

So who are the Pandas trying to allow inside?

That sign was put up after an American man married to an Oriya woman tried to participate in the rath yatra and was beaten up by the Pandas.

The wife, named Silpi Boral, was reported as saying: 'This is injustice. When Lord Jagannath is considered as Lord of the universe, how can anyone deny permission to my husband?'

I can see her point and I wish the Puri temple and other temples would clearly explain why they are excluding people from participation.

The Jagannath temple itself is beautiful, both in its architecture and the highly unusual idols, which are not anthropomorphic at all, meaning shaped like human beings, but something unique.

We went at the time of the final aarti and there were only a few people.

Having seen the murti, I turned around to face the crowd and this is always rewarding.

Indians are more demonstrative in worship, holding their hands up, prostrating, rolling, than people in other faiths.

One reason could be that our prayer is not communal, like it is in church, mosque or gurdwara, but individual.

We need to ensure that the idol 'sees' us specifically and therefore must make some gesture to stand out.

(Is that one reason we exclude: That we seek the deity's undivided attention?)

The faces of those who had come, many of them quite poor, exhibited real devotion, emotion and belief and I was moved to see them.

I wish we allow more people to experience that moment.

Both the passion and ecstasy of Hindu devotion, and the pleasure of being the observer of it.