The magnificent Jat community has taken his tears to its heart, notes Sudhir Bisht. 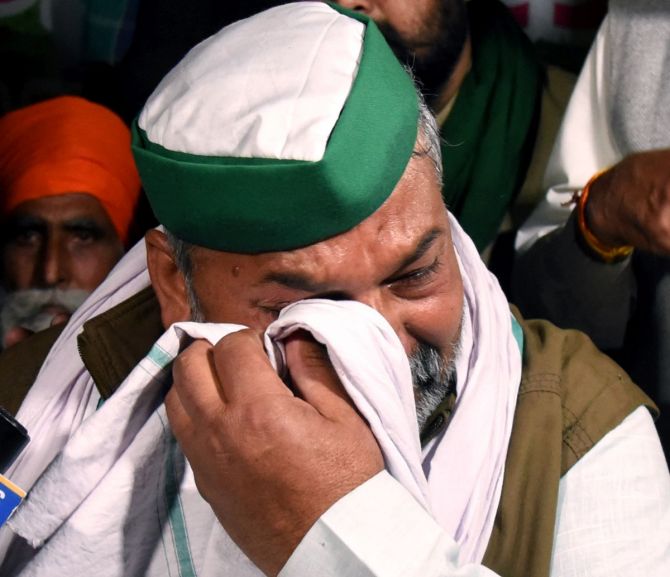 I read with interest Prasanna D Zore's interview with close aides of Rakesh Tikait who lionise the farm leader.

As a lifelong lover of Hindi heartland politics, I hereby offer my observations.

It is true that on January 28, Rakesh Tikait, the farmer leader from Muzaffarnagar, broke down while speaking to the media. It is very important to recall what he said while he was crying.

'The local MLA and others have attempted to beat up our old colleagues who are agitating here. The police had promised us safe passage and now they are doing this. So I will continue with the dharna,' he said through his tears.

Many reporters asked him repeatedly why he was crying and Tikait appeared confused, crestfallen and crushed.

I would like to affirm here that there was no beating up of anyone on the Ghazipur protest side. So Rakesh Tikait saying that he felt bad that the BJP MLA and his men thrashed old farmers is completely false.

So what really happened? Why did Tikait cry?

Let me attempt to answer this without any bias.

Rakesh Tikait is a son who is trying to live up to his father's legacy, but faltering repeatedly. His father Mahendra Singh Tikait was a leader sans much political ambition. Tikait Sr was the undisputed king of hearts of all people in the sugarcane belt of western Uttar Pradesh.

Jats supported him fully and farmers of other castes too gave him their thumbs up. Tikait Sr was the true inheritor of Chaudhary Charan Singh's legacy.

Mahendra Singh Tikait was a simple man who never enriched himself or his family. At least that is what we know. Remember, Tikait Sr lived in the age of dak edition of newspapers.

I was posted in Allahabad in 1988 when Tikait saheb brought then prime minister Rajiv Gandhi to his knees and got a very high procurement price for sugarcane. He also obtained a waiver on electricity and water charges.

Living in Allahabad, I would discover what happened in Delhi from Doordarshan News or via the dak edition of daily newspapers. Every newspaper was in awe of Tikait Sr!

The junior Tikait, Rakesh, too is a farmers' leader, but he hasn't lived up his father's legacy.

How powerful was Rakesh Tikait's father? Let me tell readers what happened in 1990 when Mahendra Singh Tikait wanted to stage a kisan mahapanchayat in Lucknow.

Mulayam Singh was then the chief minister of UP.

His Lok Dal-B (for Bahuguna) had joined hands with the Lok Dal-A (for Ajit Singh) and Mulayam had become the CM after edging out the latter.

Mulayam's administration arrested Tikait Sr on July 15, 1990. All the 70 MLAs of the Janata Dal-Ajit Singh faction threatened to resign, and this made Mulayam Singh release Tikait immediately.

Such was the power of Mahendra Singh Tikait. He controlled 70 MLAs in the Uttar Pradesh assembly and had some influence over at least 50 more MLAs. He could rattle the state government while he smoked a hookah in his village chaupal.

Mahendra Singh Tikait had a glorious run in the kisan movement, but his son has been a failure in comparison.

Tikait Jr ventured into poll politics and failed miserably. In 2007 he contested the assembly election from his hometown (Khatauli) in western UP, with active support from Sonia Gandhi's Congress, and finished sixth.

In 2014, he fought the Lok Sabha election from Amroha in western UP on a Rashtriya Lok Dal ticket and lost his security deposit, bagging just 9,539 votes.k

When the ongoing Kisan andolan was launched, Rakesh Tikait was a forgotten man, a man consigned to his farm in Khatauli.

The kisans of Punjab, who devour the largest share of MSP in India, were looking for a non-Sikh ally to give their anti-farm laws agitation a secular outlook, and zeroed in on Rakesh Tikait -- a failed kisan leader eager to resurrect his career.

As soon as Rakesh Tikait received strong feelers from the rich, large-hectare owning, Sikh farmers in Punjab to join hands with them, he agreed.

But there was a hitch -- and the hitch was that he had already supported the three farm laws!

No one has asked Rakesh Tikait why he is opposing the three farm laws after he had earlier lent his support to them.

Rakesh Tikait was soon all over the news television channels. In a clever media strategy crafted by the Punjab farmers, Tikait was given centre-stage so that the agitation did not give an impression of being a Punjab centric one.

Tikait has become the face of the agitation just as Yogendra Yadav has become its brain.

Now let me come back to the original question: Why did Rakesh Tikait cry?

I believe he cried because he thought that his latest attempt at image resurrection had failed. He probably thought that the government would end the siege of Delhi's borders after the anti-national activities at the Red Fort during the farmers' tractor rally on Republic Day.

The UP government issued Tikait a notice to vacate the Ghazipur border under Section 133 of the Criminal Procedure Code and the Delhi government has lodged an FIR against him.

He became the high school boy who had failed in the examination for the third time, and so he cried.

But his tears seem to have worked. The magnificent Jat community has taken Tikait's tears to its heart.

In Tikait, they see their late leader's son, the son of their doughty farm leader Mahendra Singh Tikait. He may be a failed son, but a son nevertheless.

That is how it works in the Hindi heartland. 'Nikamma hai toh kya? Hai toh apna chora hi' is the emotion that prevails in the end. Roughly it means, 'Even if he is no good, he remains our son.'

Community elders and peers have pressurised Rakesh Tikait to stay put at the Ghazipur border. The pressure from Punjab leaders is also very high. Ajit Singh too has now rallied around him.

Ironical it is because Ajit Singh was always envious of Mahendra Singh Tikait's stature in western UP.

The tears have done their job.

Those were not crocodile tears, but I believe tears of failure, frailty and fear. And the tears have saved the day for Tikait, Jr.