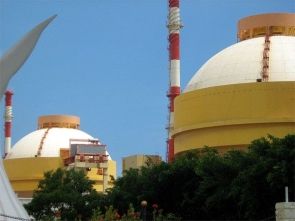 India’s nuclear establishment is continuing its march of folly at the expense of safety in the false belief that atomic power is the energy of the future. It’s not. Nuclear power is in relentless global decline, says Praful Bidwai.

Communist China, which routinely represses popular protests, should be more intolerant of mobilisations against nuclear power than democratic India, which pays heed to grassroots sentiments at least sometimes. That’s only logical. Right?

Wrong. Just a week ago, the Chinese government bowed to popular protests by cancelling a proposed $6 billion uranium processing plant. At the same time, Nuclear Power Corporation of India Ltd announced that the first nuclear reactor at the $3 billion Kudankulam plant in Tamil Nadu had gone “critical” -- its fission chain-reaction had started, marking a crucial step towards its commissioning to generate electricity.

The Chinese decision followed a one-day march by hundreds of citizens. The controversial Indian decision was imposed in the face of sustained and continuing protests by tens of thousands of people since 1989, which escalated after public concerns about nuclear safety were heightened worldwide by the March 2011 Fukushima catastrophe in Japan.

As if that weren’t a sad enough commentary on the participatory quality of India’s democracy based on respect for the people’s will, NPCIL acted in blatant violation of the spirit of a May 6 Supreme Court order in a petition raising questions about the safety of the Kudankulam plant.

This order asked that NPCIL, the Atomic Energy Regulatory Board, Ministry of Environment and Forests and Tamil Nadu Pollution Control Board “oversee each and every aspect of the [contested] matter, including the safety of the plant, impact on environment, quality of various components and systems” before commissioning the plant. After ensuring full compliance with safety norms, they must file a report “to that effect … before this court” prior to the commissioning.
Implicit in the order was not just the formal filing of such a report, but its judicial approval. Or else, the court would merely have asked that the concerned agencies satisfy themselves, and left the matter there. But the agencies filed the report in a sealed envelope(!), and made the reactor critical before the court could read, let alone approve, the report!
Clearly, India’s nuclear establishment played games with the life-and-death issue of nuclear safety by cutting corners and bypassing procedures whose express purpose was to assure a sceptical public at a time when responsible scientists and nuclear experts, including former AERB chairman A Gopalakrishnan, repeatedly warned about the plant’s hazards.

Yet, such grave breach of public trust, and contempt for democratic processes, conforms to a well-established pattern. India’s Department of Atomic Energy, with its subordinates NPCIL and AERB, has always defied accountability to Parliament and the public. Glorified by an ill-informed media, coddled by policymakers who love the bomb and hate life, and shielded by the Atomic Energy Act 1962 -- which empowers it to hide any information it likes -- the DAE has become a law unto itself, and a negative object lesson for democracy theorists.

Indeed, in their latest book An Uncertain Glory, Amartya Sen and Jean Dreze devote an entire section to the DAE as a prime example of lack of accountability and the undesirable and anti-democratic results this produces.

No wonder the DAE has turned out to be the worst-performing department of the government. It’s a White Elephant. It promised to install 20,000 megawatts in capacity by 1980, and 43,500 MW by 2000. The respective achievements were 512 MW and 2,720 MW. It has never completed a major project on time, or without a 300 percent cost-overrun. It has failed to develop any worthwhile technology and always borrowed, bought or stolen knowhow from others.

The DAE has an appalling safety record -- fires, massive leaks of radiation and heavy water, collapse of critical safety systems (like protective reactor domes), releases of toxic effluents and emissions, poor storage and transportation practices, nuclear waste-dumping, and exposing thousands of people, including the lay public, to radiation and other poisons well above permissible limits. The DAE has persistently failed to learn lessons from past mishaps and evolve a culture of safety.

To return to Koodankulam, the DAE/NPCIL is wholly unfamiliar with the Russian-supplied light-water reactors and has run into unanticipated technological defects and problems. The start-up of the first reactor, due in 2010, was postponed more than 20 times because of these problems -- not because of the popular protests whose site, Idinthakarai, is three kilometres away.

The worst of these problems pertain to defective vessels, piping and valves, low-quality electrical cables, and substandard instrumentation and control systems. These were not properly checked for quality before being installed in crucial safety systems which are meant to shut down the reactor by removing excess heat or flooding its core with water in an emergency.

For instance, new valves showed cracks during initial tests. According to Dr Gopalakrishnan, NPCIL was unable to “eliminate spurious signals of untraced origin appearing in many of the instrumentation cables of paramount importance to safety.” Such spurious inputs interfere with “real” signals, and can lead to “unpredictable and serious malfunctions or accidents”.

Many of these problems are traceable to ZiO-Podolsk, a subsidiary of the Russian atomic energy corporation Rosatom, which has gained notoriety for supplying substandard equipment to several Russian-designed reactors. Like many businesses in post-Soviet Russia, the nuclear industry too is run by a mafia, which cannot be trusted with quality or reliability.

The Russian Federal Security Service in February 2012 arrested ZiO-Podolsk director Sergei Shutov for corruption and fraud, in particular buying low-quality materials on the cheap over the years, and passing them off as high-quality components.

When confronted with these facts by protesters and dissenting experts, NPCIL and the AERB first flatly denied them, and then did some shoddy, half-hearted fire-fighting. Meanwhile, substandard components and materials were already installed in various parts of the Kudankulam reactors.

As Dr Gopalakrishnan warned in April and June in two signed articles, their “deficiencies and defects are dormant today”, but “may cause such parts to catastrophically fail when the reactor is operated for some time… Many such parts and materials may have been installed within the reactor pressure vessel itself, which is now closed and sealed ….”

Once the reactor goes critical, many of “these components and materials” will “become radioactive and/or will be in environments where they cannot be properly tested for quality or performance.”

“Under the circumstances,” he argued, the commissioning of the first reactor and construction of the second “must be stopped forthwith”. “There can be no question of resuming” such work “until a thorough and impartial investigation is carried out into the impact of this corruption scandal and sub-standard supplies on the safety of these reactors.”

Another 60 well-known scientists from different institutes warned the Tamil Nadu and Kerala chief ministers in May of “the danger that the impact of a major hazardous event in Kudankulam … could spread to larger regions” (as in Fukushima) and called for “a fresh independent and thorough quality inspection of the components used in the two reactors”.

They included “scientists who believe that nuclear energy has a legitimate role in securing our energy future and others that believe that nuclear energy is too risky.” They were all ignored. Also ignored were Kudankulam’s site-specific problems, including vulnerability to tsunamis, volcanic activity and geological instability in nearby areas, and the absence of an independent freshwater source.

Why, the authorities brazenly violated not just coastal zone regulations, but the AERB’s own siting regulations, which stipulate “zero population” within a 1.5 km radius. But at least 20,000 people live there today. Also breached was its rule that no fuel be loaded in a reactor unless a full emergency evacuation drill is conducted involving the entire population in a 16-km area, with commandeered vehicles operating on designated routes.

In the mad clamour for Kudankulam’s 1,000 MW of electricity, it was forgotten that southern Tamil Nadu itself has 7,000 MW of severely underutilised wind-turbine capacity, and India nearly 20,000 MW which is lying idle for want of gas.

India’s nuclear establishment is continuing its march of folly at the expense of safety in the false belief that atomic power is the energy of the future. It’s not. Nuclear power is in relentless global decline. The number of reactors worldwide peaked in 2002. Their output decreased by 7 percent in 2012 after a 4 percent fall in 2011. Nuclear power’s share in global electricity generation has fallen from a 17 percent peak (1993) to just 10 percent. (www.worldnuclearreport.org)

Fukushima has greatly accelerated the decline. The average age of the world’s nuclear fleet is 28 years. Over 190 units (45 percent of the total) are 30 years-old, and 44 are 40 years-old or older. As these retire, very few new units are being built.

By contrast, renewables like wind and solar are growing rapidly worldwide -- annually by 27 and 42 percent since 2000. In 2012, wind produced almost 500 TWh (terawatt-hours, thousand-billion units) and solar about 100 TWh more than in 2000, but nuclear power produced 100 TWh less.

In 2012, China and India for the first time generated more power from wind than from nuclear plants. In China, solar generation spurted fourfold. That’s where the future lies.