'What needs to be watched is that the border incidents at Dokalam in 2017 and Galwan in 2020 are triggering nascent Chinese nationalism against India,' asserts Srikanth Kondapalli, the leading China expert. 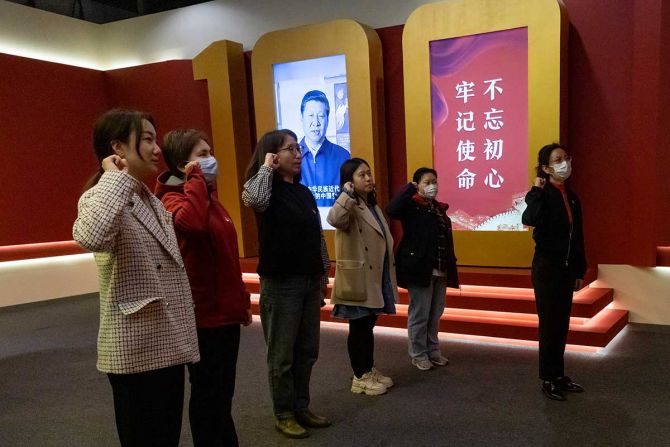 IMAGE: Chinese citizens swear an oath to the Chinese Communist Party in front of an installation that includes an image of CCP General Secretary Xi Jinping at an exhibition marking the party's 100th founding anniversary in Beijing, April 22, 2021. Photograph: Thomas Peter/Reuters

Many Communist parties across the globe are dwindling or even disintegrating such as in the Soviet Union in the early 1990s. One major exception is the Communist Party of China (CCP) which is celebrating its 100th anniversary with pomp and show at Beijing.

India is watching with keen interest on what such event connotes. As two large countries in Asia with the largest population, territory, economy, military and power, it is natural that the systems of governance they adopted would come under close scrutiny.

First is the wide difference that exist between the two systems. China is an authoritarian one-party (CCP)-led country, while eight other nominal political parties have barely any power.

The CCP boasts of 92 million cadres who select the candidates to a once-in-five-year national congress that chooses the party leadership, with the rest of the population having no say in the process.

Anyone questioning the party-State has been silenced in China with isolation, incarceration or even death.

India, on the other hand is a multi-party, competitive politics-based bubbling democracy in which Communist parties (established at the same time as the CCP in 1921 but splintered later) also participate in elections, but have lost considerable popular base in West Bengal, Tripura and other states.

These parties, in addition to 'fellow travellers' are close to the CCP as 'fraternal parties' and invited to China for confabulations.

The Maoist groups in India, on the other hand, consider the CCP as a 'social imperialist' like the CCP once considered the Soviets in the 1960s.

Secondly, the CCP today is triggering and channelising nationalism for its broader goals.

Peasant nationalism, according to Chalmers Johnson, formed the basis of the CCP's appeal in the formative decades of the 1920s and 1930s. Such nationalism was directed against 'three big mountains' of feudalism, imperialism and bureaucratic capitalism then and on Japan.

In the 1950s, nationalist campaigns against the United States took the form of national mobilisation to participate in the Korean War and on Taiwan question.

The 1960s witnessed intense red guard activism against the Soviets and the US, gradually paving way for domestic reform.

As much of the population is shifted to urban areas, the CCP is shifting from peasant to urban nationalism aided by advances in communication technologies.

Today, we see unbridled Han-nationalism -- nay chauvinism -- across China with implications not only to the ethnic minorities like Tibetans, Uighurs or Mongols. but also to other countries.

What needs to be watched is that the border incidents at Dokalam in 2017 and Galwan in 2020 are triggering nascent Chinese nationalism against India recently.

Already, party apparatchiks are feeding ordinary folks since 2005 that Arunachal Pradesh is part of 'southern Tibet'! A potential nationalism card against India is in the offing.

Thirdly, in a hundred years of on-and-off interactions between CCP and the Indian Communist parties or other political dispensations, it is clearly China's party-State interests that prevailed over any universal fraternal considerations.

This is partly because the CCP was assiduously cultivating the image, according to Mao Zedong in August 1949, of being at the 'centre of gravity in Asia'.

In fact, on the other hand, Indian Communist parties or other political dispensations played second fiddle to and benefited the CCP in its international march, be it in the anti-colonial movements, introducing China to the Afro-Asian countries, Bandung movement or in securing United Nations Security Council membership.

More significantly, while the CCP has consolidated distant lands through irredentist claims, serious doubts are being sown in Indian minds about its own sovereignty and territorial integrity.

Fourthly, decades of transitions from 'peaceful coexistence' of the 1950s to 'armed coexistence' as Mao alluded to the 1962 clashes aftermath to the current 'armed stalemate' in the borders, there is a subtle message of 'superiority' of the models of development followed by different countries, specifically in relation to India which has a similar population strength.

In fact, the last 19th CCP congress in 2017 suggested to the export of its party-state model abroad.

As competition between a democratic Indian model and an authoritarian Chinese model becomes intense in Asia, Africa and South America, the export of "China model" has implications for the future.

Party apparatchiks are at pains explaining the advantages of their model by suggesting how they maintained double digit growth rates (although declined to about 6 percent in the last few years and to 2.3 percent last year), built-up huge infrastructure across the country, reduced extreme poverty and the like without mentioning the social and environmental costs.

They also point to how effectively the party-State tackled the pandemic originating from Wuhan in late 2019, although no mention is made of how in the first place the virus originated or how it was allowed to spread from Wuhan to the rest of the world, including to India.

They, on the other hand, point to India's 'poor' record in aligning democracy with modernisation. Such competition between these two models is expected to intensify in the near future.

Fifthly, while the CCP began sending and receiving delegates to all political parties in India, the latter invited none other than the CCP, even though China claims to be a 'multiparty' socialist country.

In fact, India even has exercised 'self-restraint' in not inviting other parties in China, leave alone Tibetan, Uighur, Mongol or Falung Gong activists.

India thus seems to have given up political reciprocity, as it had given up diplomatic reciprocity in the 1950s.

Clearly, China's writ runs large with whom the Indian political parties interact with in that country not vice versa.

Clearly, then as the CCP celebrates its hundredth anniversary, India needs to carefully evaluate the impact of China's party-state model export but also its own model, destiny, governance systems and modernisation deliverables in order to further strengthen its appeal to the international community.