By B Raman
September 05, 2012 02:45 IST
If the political parties in Tamil Nadu do not conduct themselves with a sense of balance and responsibility and indulge in competitive exploitation of the discontent in certain sections of the population over Sri Lanka-related issues, they may end up by creating passions beyond control in both countries, notes B Raman.

All right-thinking Tamils should be concerned over the acts of anger directed against two football teams of Sri Lankan students in Chennai and against Sri Lankan Christian pilgrims in southern Tamil Nadu in recent days. This resulted in the football teams having to go back to Sri Lanka and in anxieties over physical security among the pilgrims.

There is a reason to suspect that some of these incidents were more politically-orchestrated than spontaneous expression of anger by the local people against the Sri Lankans.

There is a genuine anger among sections of the people of Tamil Nadu against the Sri Lankan government over the following aspects of its policies towards the Sri Lankan Tamils:

This anger has been turned by the local political parties against the government of India also for the following reasons:

Fortunately, till now, the exploited anger has not led to any untoward incident of violence against the Sinhalese. If the temptation to politically exploit this anger by different parties is not resisted, there is a danger of a backlash by the Sinhalese against the Indian nationals (not necessarily only against the Sri Lankan Tamils) working in Sri Lanka.

In recent years, India's economic relations with Sri Lanka have considerably improved and a number of Indian companies have established their branches in Sri Lanka. There has also been an increase in the number of Indian Tamil tourists visiting Sri Lanka.

If there is a backlash against them, we might be faced with a vicious circle of ethnic violence in the two countries.

If a politically-motivated attempt is made now to rouse the feelings of the people of Tamil Nadu over the attitude of the Sri Lankan government towards the Sri Lankan Tamils, the resulting passions may take unpredictable shape.

In view of the 2014 elections, no party is prepared to adopt a reasonable attitude. Even the DMK, which supports the Manmohan Singh government at the Centre, has joined the anti-Sri Lanka campaign in Tamil Nadu unmindful of the difficulties of New Delhi.

The government of India is not in a position to exercise adequate pressure on the Rajapaksa government either on the issue of the political future of the Sri Lankan Tamils or for the protection of our fishermen.

Nor is it in a position to force the government of Sri Lanka to hold an enquiry into the violation of the human rights of the Sri Lankan Tamils.

In view of the strong political and economic support for Sri Lanka from China and Sri Lanka's developing relations with Pakistan, we do not have much of a card for coercive diplomacy against Colombo. The government of India has to do the best of a bad bargain.

The dilemma faced by the government of India is partly the result of its failure to foresee and pre-empt the politically caused emotions with an eye on the 2014 elections. Unless it persuades the ruling AIADMK to tone down any politicisation of the problem, the DMK, its ally, is unlikely to co-operate with it.

It would not like to be projected by the AIADMK as not being supportive enough of the Sri Lankan Tamils and our fishermen.

The only way of dealing with this issue is through a possible quid pro quo by conceding the demands of the Tamil Nadu government in other matters not having an impact on our foreign policy in return for its giving up its present policies relating to Sri Lankans.

This is a tricky political matter to which a solution based on an all-party consensus with the political parties of Tamil Nadu has to be found by our prime minister asserting his authority and taking the necessary initiative.

His reluctance or inability to exercise authority could make the situation messier. 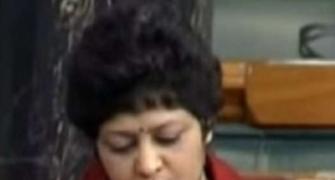