What will happen when computers overtake our ability to think?

In the next 25 years or so, we will have intelligence in computers that will exceed man's in every way.
The speculation is that artificial intelligence will not be malevolent, meaning deliberately wishing to harm us, but it will treat us as we treat insects.
It will ignore us while it goes about perfecting itself, says Aakar Patel.
Illustration: Dominic Xavier/Rediff.com 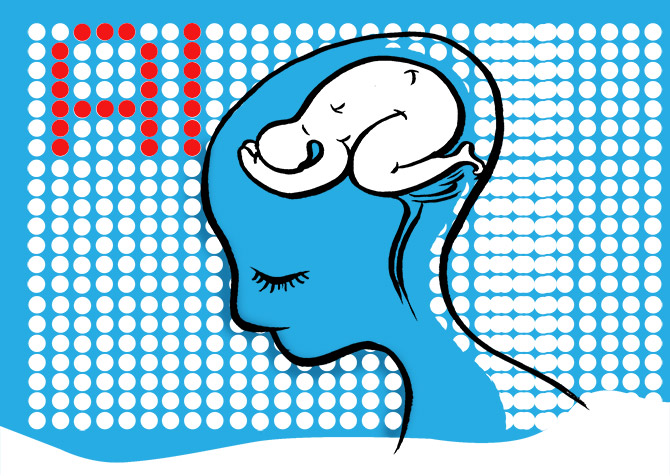 In the United States, the world's most advanced nation, there has been a strange issue that is being discussed.

It is being written about in books, and there are talks on it (which one can access on YouTube), but there is yet no action on it, though this is expected soon.

The issue is that of artificial intelligence becoming smarter than man.

To us in India this does not seem like something to think about much. Computers are to us devices that we have control over.

Our laptop or mobile phone is to us a tool and our servant. It is not our master.

However in America, some of the smartest people working on technology are thinking about and discussing what will happen when artificial intelligence, meaning computer programmes, overtakes man in the ability to think.

They are thinking about this for two reasons.

The first is that there is an agreement on what 'intelligence' means. There is no magic to the way that the human mind works.

Thinking can be explained in scientific and biological terms that is quite precise.

Intelligence is information and the ability to know what to do with it.

In the last 20 years, and particularly in the last three, computers have become very good at intelligence.

To give the most basic example, America has today self driving cars and it is being predicted that a fully independent car is no more than two years away.

Meaning you can get into your car and go to sleep or read a newspaper while you are driven to your destination.

This is a car that can do all the functions we can do -- start the engine, shift the gears, brake when needed, speed up when required -- but also do things we cannot.

It can detect dangers front, back and side at a level humans cannot.

It can optimise driving speed for best fuel consumption.

It can be connected to a network of cars and know about conditions up and down the road for hundreds of kilometres.

And this, as I said, is just a basic example of what computer intelligence can already do.

And artificial intelligence will continue to improve, and improve fast. Why?

Because we humans have many problems that we need technology to solve.

From finding cures for diseases to developing business systems. Everything in the modern world currently requires the use of computer intelligence and this is not going to change.

The other aspect that people are beginning to accept is that man will not be able to keep pace with this explosion of intelligence. Why?

Because our brain is of fixed size and can contain only a limited amount of cerebral cortex and the supporting material that gives us the ability to remember and think.

Computer intelligence can have no such limitations. It is possible to build a computer the size of a large building.

The question is why would someone want to build that large or powerful a device when it is clear that there are dangers we have not anticipated.

And the answer is that technological progress is how the world's companies and the world's armies compete with one another.

And so this race, which was began some time ago, will continue without pause.

Corporations and militaries will keep building smarter and more capable and more intelligent computers and computer programmes. And this intelligence will have to be given autonomy because man will not be able to keep up with it.

In the two decades since, computers have become many, many more times smarter.

The estimate is that in the next 25 years or so, we will have intelligence in computers that will exceed man's in every way.

At this point, computer intelligence will be able to get itself faster than man can. And then the speed of improvement will be explosive.

Computers process information much faster than us and they are not limited by the bio-chemical process as the human being is.

We have no idea, absolutely zero idea, of what sort of progress this super-intelligence will be able to make after it arrives.

The speculation is that artificial intelligence will not be malevolent, meaning deliberately wishing to harm us, but it will treat us as we treat insects. It will ignore us while it goes about perfecting itself.

This, then, is what people in America are thinking about. And it is a subject that even we will not be able to ignore for too long.