News
Business
Movies
Sports
Cricket
Get Ahead
Money Tips
Shopping
Sign in  |  Create a Rediffmail account
Rediff.com  » News » Solomon would have been proud of Ayodhya verdict

The Ayodhya judgment of November 9 draws on both the polytheism of Hinduism and the modern rule of law, says Deepak Lal. 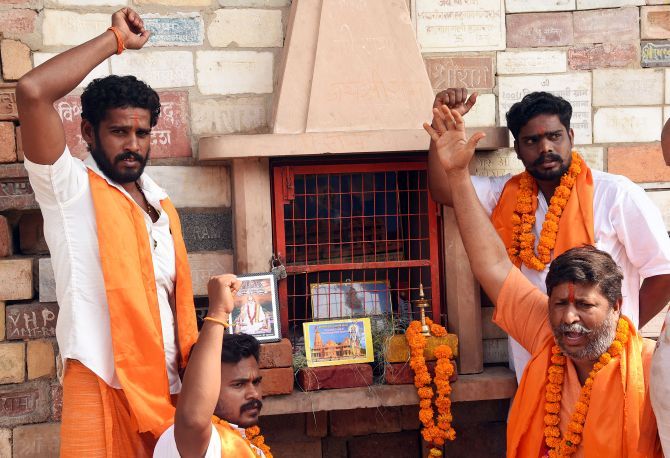 The landmark verdict of the Supreme Court on the disputed Babri Masjid gave its land to the idol of Ram, who was given a juristic personality.

The court further said a Ram temple, to be put in a trust, was to be built to replace the Babri Masjid.

The desecration of the mosque by Hindus in 1949 by insertion of an idol of Ram in the inner sanctum of the mosque, which was subsequently destroyed in 1992 by the Ram Mandir movement, were criminal acts which deprived Muslims of their place of prayer, who were to be compensated by being given land to build a mosque.

The ongoing criminal cases against those involved in destroying the mosque were to be speedily completed.

This judgment has been questioned by Asaduddin Owaisi, chief of the All India Majlis-e-Ittehad-ul-Muslimeen, who said: 'If the Babri Masjid was legal, then why was it (land) handed over to those who demolished it? If it was illegal, then why the case is going on? Withdraw the case against Advani, and if it is legal then give it to us.'

To sort out these differences it is useful to see the distinction between Hindu polytheism and Muslim monotheism and how the British Raj impacted India's traditional laws and affected its polytheism.

David Hume in his Dialogues and Natural History of Religion argued that polytheism, which is the original religion of mankind, 'arose not from a contemplation of the works of nature, but from a concern with regard to the events of life, and from the incessant hopes and fears that activate the human mind'.

Monotheism by contrast believes in a supreme deity, the author of nature, the omnipotent creator.

Comparing the two -- polytheism and monotheism -- Hume notes: 'The greatest and most observable differences between a traditional, mythological religion, and a systematical, scholastic one are two: The former is often more reasonable, as consisting only of a multitude of stories, which, however groundless, imply no express absurdity and demonstrative contradiction; and sits also so easy and light on men's minds, that, though it may be as universally received, it happily makes, no such deep impression on the affections and understanding.'

Discussing the relative merits of polytheism and monotheism, Hume notes that polytheism's 'idolatory is attended with this evident advantage, that, by limiting the powers and functions of its deities, it naturally admits the gods of other sects and nations to a share of divinity, and renders all the various deities, as well as rites, ceremonies or traditions, compatible with each other.'

In contemporary parlance it is secular.

He concludes: 'The intolerance of almost all religions, which have maintained the unity of God, is as remarkable as the contrary principle of polytheists.'

The most important was the establishment of the rule of law by Cornwallis separating the judicial and executive functions of government and making government-executive decisions contestable in civil courts.

It was only after Independence that legal reforms of personal and family law picked up. Untouchability was outlawed, bigamy became punishable, divorce, inter-caste marriages and widow remarriage were permitted and daughters were given shares in ancestral immovable property and the administration of Hindu temples and monasteries was radically altered.

The Ayodhya judgment draws on both the polytheism of Hinduism and the modern rule of law.

In its arguments (in Part J of its full judgment) for accepting the juristic personality of the idol of Ram it (in J.2 para 109) cites polytheistic Roman law, saying 'in conferring legal personality on the Hindu idol, courts drew inspiration from what they saw as factual parallels in Roman law.'

'Where the property vests in a foundation constituted for a pious purpose, it retains the characteristics as immovable property.'

'This remains true even in cases where the property vests in the deity in an ideal sense.'

'The purpose of conferring juristic personality is to ensure both a centre of legal relations as well as the protection of the beneficial interest of the devotees. It does not, however, alter the character of the property which vests in the juristic person.'

'It remains subject to the framework of the law that defines all relationships governing rights or interests claimed in respect of property and the liabilities which attach to jural transactions arising out of property.'

The court also rejected (in para 196) the contention that a mosque and its adjoining properties were a juristic person (like a Hindu idol) citing a 1940 British privy council judgment which stated 'that there should be any supposed analogy between the position in law of a building dedicated as a place of prayer for Muslims and the individual deities of the Hindu religion is a matter of some surprise to their Lordships... the procedure in India takes account necessarily of the polytheistic and other features of the Hindu religion and recognises certain doctrines of Hindu law as essential thereto, eg, that an idol may be the owner of property'.

Thus, the Supreme Court in its Ayodhya judgment, whilst reaffirming the polytheism of Hinduism by giving a juristic personality to the idol of Ram, to whom from the strength of Hindu belief and other evidence it weighs, it gives the right to build a temple governed by a trust on the site of the Babri Masjid.

It also supports the modern rule of law which does not allow private agents to unlawfully demolish immovable property, and thence supports the prosecution of the destroyers of the mosque, whilst also compensating the victims of its destruction.

Solomon would have been proud of this judgment.