So much the phone has taken away from us

'How did we get here?'
'How did utility morph into addiction?'
'Is this what Graham Bell intended?' asks Veenu Sandhu.
Illustration: Uttam Ghosh/Rediff.com 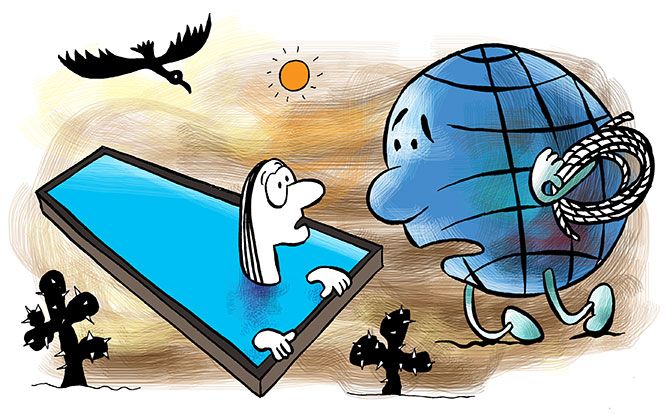 It often makes me nauseous, yet I am unable to tear myself away from it, that animal called Twitter.

Though I am not much of a tweeter, I like to keep an eye on the goings-on in the world and stay abreast of the ugly, the bad and the smattering of good -- the unfortunate order in which Twitter serves up information.

On most days, it makes my stomach churn, my blood boil and my skin crawl.

But there are moments when it gets me thinking about a time we might have lost forever.

A time stolen by one of the most dangerous inventions of our times -- the smartphone.

One such moment came in the form of a tweet by Asha Bhosle: A picture of the singer seated in what appeared to be a waiting room, face resting on hands, looking bored and forlorn.

On the adjoining sofas sat her fellow travellers, each glued to his phone, blind to the legend sitting there.

'Bagdogra to Kolkata... Such good company but still no one to talk to. Thank you Alexander Graham Bell,' the caption read.

It's a familiar picture.

Sometimes, looking at my fellow commuters gives me this odd impression of ostriches with their heads buried in sand.

At times I, too, stare into my phone for so long that I get disoriented.

And when I look up, the real world looks unreal -- too bright, too big.

It feels as though I have been hoisted out of a bottomless well and transported to another world.

How far we have come from those days when we engaged with, or were even conscious of, the world around us -- the real world, the tangible world.

Those days when we chatted with fellow travellers.

Or simply observed them, assigning lives and stories to their characters.

When we hailed strangers to ask for directions.

When these strangers went out of their way to help us.

When the five-inch screen we now keep turning to did not hold the power to snap our attention away from dinner, and family, and friends.

How did we get here? How did utility morph into addiction? Is this what Graham Bell intended? Did he anticipate this? Who knows?

So much the phone has taken away from us.

It has birthed FOMO -- a cute-sounding but sinister term I recently discovered though it was officially added to the Oxford Dictionary in 2013.

FOMO stands for the 'fear of missing out' -- an anxiety that researchers say is characterised by the desire to stay continually connected with what others are doing, or talking about.

One would have then expected FOMO to have made us a more informed society.

But has it also made us a wiser society? I don't think so.

The speed at which we are devouring information -- snippets of information actually -- seems to be turning us into imbeciles incapable of nuanced consumption and nuanced thought.

A single picture brands a person.

A 10-second video sways our opinion.

Priya Prakash Varrier becomes the 'wink girl' -- much loved till we assume that her debut film, Sridevi Bungalow, is an attempt to recreate the life of the beloved Sridevi who died in a bathtub last February.

Based on a two-minute-long movie trailer, swooning admiration turns to scorching admonitions for a 19-year-old girl trying to find her feet in the film industry.

Something similar happened when we saw billionaire Bill Gates waiting in line for a burger.

A man of values, we gushed, forgetting that this was also the man who had been hauled to court for monopolistic practices -- the 'humble man' who had threatened to strangle his competitors.

We couldn't see that a billionaire being a regular guy could also be a ruthless, cut-throat businessman.

Just like we can't accept that a ruthless, cut-throat businessman can also be a regular guy.

We need to see him as one or the other.

The information onslaught unleashed by the smartphone has so dimmed our faculties that we are incapable of accepting the good, the bad and the ugly as a package that makes us human.

This is what our FOMO should be about -- the fear of missing out on nuance.