The Opposition must understand that while 2024 may draw mileage from the growing resentment towards the BJP, the real battle and proof of how well India learnt from its disastrous dalliance with the Right-wing, will be in 2029, observes Shyam G Menon. 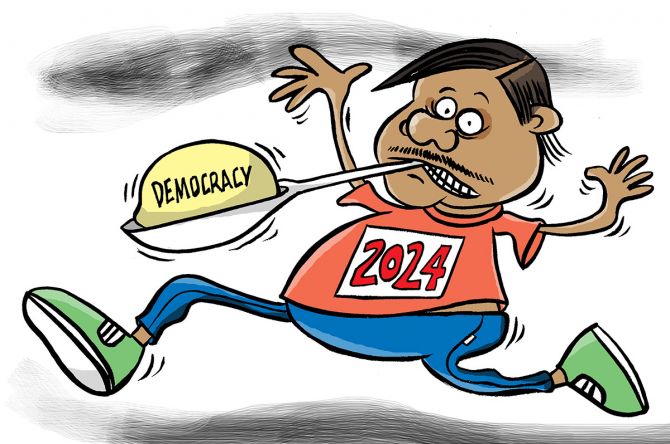 Ultimately, everything rests on one vote.

India's Opposition parties have been showing signs of coming together to take on the BJP.

There is the slogan: 'Khela hobe', there have been calls for Opposition unity and meetings for the same.

All that is encouraging. What they shouldn't forget is that in the end, only the vote counts.

It is what we decide in our head and how we vote that makes for verdict.

Both are personal; shielded by cranium and character from the assault of external influences.

Given said verdict is still a long way off, as in a lemon-spoon race, India's Opposition parties need to carry their resolve without losing it, into 2024 and beyond.

It sounds simple, but potential hurdles check those wishing to see the last of the BJP.

The Right-wing's affection for abject domination has been noticed by the electorate.

It may not be so much in the printed text of their intentions as in the behaviour.

They have toyed with the Opposition to the point of ridicule, set government agencies after political opponents, trolled their critics and been cryptic in response to accusations of running a surveillance State.

At the same time, they have contributed to the prospects of businesses owned by their well-wishers, managing thus to cultivate powerful patrons.

It insulates them from public opinion, normally the tide parties heed.

The combination of pushy, intolerant political ideology and backers who don't attach high value to freedom, puts democracy -- a system described as government of the people, by the people and for the people -- at risk.

The public requires to be vigilant.

Unfortunately, in a country like India, straddled with a society that never discards feudalism and vindication by wealth and power, those arguing passionately for democracy tend to be progressives, human rights activists and liberals.

Not only have their numbers been traditionally small, they have also been hunted by officialdom and trolled by the Right.

For the Right-wing, the Left leaning nature of some from the pro-democracy lot, adds legitimacy to their eradication.

For a while now, we have been enduring a phase similar to the McCarthy era of American politics when lobbies prevailed that were suspicious of anything remotely socialist.

All these put inclusive democracy, on a shaky wicket.

So, the first thing to ensure in the lemon-spoon, long trek to 2024 is keep our democracy and its election process alive and secure.

It is one lemon we can't afford dropping. The importance of 'organised'

In India's electorate, the unpredictable portion is typically the middle class.

The elites vote for abstract ideals or paramountcy by money, with preference more for the latter.

The poor vote for survival.

In the middle, there is the murky waters of unclear priorities.

Here the undead memories of life as it used to be and the desire for what can potentially be -- all come into play.

The imagination spans fancy for religion, community, tradition and cultural identity to fancy for urban skylines and consumerist lifestyle.

The dominant wish is for a reliable framework of existence, one in which each passing day can be counted on for stability.

At the level of ordinary citizens, improvements take time to manifest.

If existence is unstable, the journey to prosperity can be rough.

In the run up to the 2014 general elections, one of the first observations heard about the Right-wing's campaign for votes (particularly when they came door-to-door), was: 'They are so organised.'

In middle class neighborhoods, this picture of solidarity and knowing what to do was greatly admired.

It attracted the electorate given the specter of disarray the United Progressive Alliance government under Dr Manmohan Singh was in its second term.

Such acceptance of the Right-wing intrigued because as a political movement it hauled a baggage of violence and destructive, emotionally surcharged campaigns.

How did that risk get overlooked so easily?

Indian society begs portrait by behavioral psychology, for on that rests the nature of its politics.

For instance, the overwhelming tendency in India to marry and raise family, authors unique compulsions.

Yet the tendency rarely finds mention as influencer in politics, still interpreted as a battle of competing ideologies.

Is this why India hypocritically values order despite the chaos of high population, into which marrying and raising family are directly invested?

Whatever, one reason the BJP got the 'organised' image correct was the presence of the Rashtriya Swayamsevak Sangh in its campaign wagon.

You may disagree with RSS ideology, but you cannot ignore its structure and network.

Further, by the second decade of the 21st century, the erstwhile industrial workforce with its appetite for politics and protest had run into the swelling ranks of corporate culture, wherein protest was abhorred and compliance was virtue.

Rewards were more for the obedient.

That's how careers are made and a good career means, good earnings.

This new sensibility was valued highly by families.

Equally, it complemented the older generation's belief that it was lack of order, which deprived India of developed world-looks in their lifetime.

Against this backdrop, the image of being organised, was an asset for the Right-wing.

However, in the years since, the various actions of the National Democratic Alliance government under Narendra Damodardas Modi, its proximity to major corporate entities, a rash of contestable political and economic decisions and growing income inequality have cast their shadow on blind adulation for organisation.

Still given the underlying social realities, the admiration for organisation continues.

It is certainly stronger than respect for the protesting lot, who despite legitimate grievances, get labeled as anarchists.

Thus success for India's Opposition parties in 2024, depends on them being the liberal, inclusive, secular force they claim to be and yet at the same time, sufficiently organized to inspire public confidence.

The political facade of their coalition should be accompanied by an efficient, committed back office, which keeps them 'organised' and effective.

In other words, they have to do a BJP unto the BJP without being the BJP.

Sans such cohesion, they risk being dropped by voters in the period from now to 2024, a haul long enough for lemon to slip off the spoon. Be a credible alternative; there is no room for half-baked acts

As an extension of the above-mentioned point, the Opposition has its private lemon-spoon act to do.

One oft heard question is: What is the alternative to the BJP? It may be irritating to hear for the Opposition and its voter base.

The irritation is justified because history's alternatives were all not impressive at start.

From chance provided, promise blooms. But the question is still unavoidable and an important one to address.

'Credible alternative' is a composite of several attributes.

The Opposition has good arguments.

It has parliamentarians who speak well.

Problem is -- the public perceives an Opposition-coalition as one on inevitable countdown to implosion.

How do you manage all those family sponsored political parties, their turf wars, giant egos and fragile sensitivities? Worse, the environment in which they operate is trickier than 2014.

The BJP just doesn't let the Opposition be.

Baits are dangled to defect, break up governments; often to good effect.

The Right-wing ceaselessly tries to sway electorate and politicians with propaganda helpful to its cause.

Unless the Opposition parties acknowledge the damage caused to India by the Right-wing and see the 2024 general elections as an extraordinary attempt to repair and restore the social fabric of this country and the retail (not corporate) optimism of economic liberalisation, they can kiss their chances goodbye.

And with it, India will be that much more distanced from being a proper democracy.

To succeed, the Opposition must ensure that the one vote every voter has, is cast in 2024 and it ends up a vote for change.

Finally, the Opposition must understand that while 2024 may draw mileage from the growing resentment towards the BJP, the real battle and proof of how well India learnt from its disastrous dalliance with the Right-wing, will be in 2029.

That election will be the one installing the country on the track of stable governance, dependable economic policies and progressive views, provided India chooses to do so.

In comparison, if all goes well, 2024 will be just a correction but an indispensable one.