'The urge to name the upcoming Navi Mumbai airport after well-known personalities and the equally strong urge to rally in large numbers supporting this name and that; all of this amidst COVID-19, felt deplorable,' asserts Shyam G Menon. IMAGE: Locals gather at the Palm Beach Road near CBD Belapur as they protest against the naming of the Navi Mumbai International Airport, in Navi Mumbai, June 24, 2021. Photograph: PTI Photo

That brought relief, but even the quarter that turned up suffices to upset the delicate peace with the virus, every unlock is. Days before, Palghar had been made an example. Hundreds rushed to a tourist site just opened up, forcing authorities to downgrade the locality's status in unlock.

On June 24 evening, the worry in my mind was similar -- what happens next in Navi Mumbai?

While frequent flyers lost to aviation jargon may talk of flying from this airport to that, the majority of us fly from one place to another.

The name of the airport is a minor detail. The urge to name the upcoming Navi Mumbai airport after well-known personalities and the equally strong urge to rally in large numbers supporting this name and that; all of this amidst COVID-19, felt deplorable. 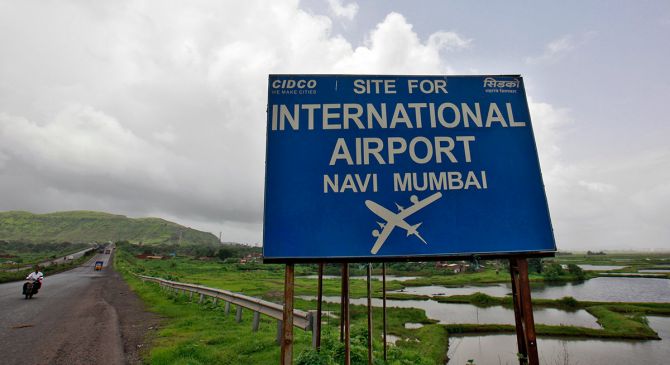 IMAGE: A signboard at the proposed site for the Navi Mumbai airport. Photograph: Danish Siddiqui/Reuters

The said airport is not only under construction, but within that, it is also at an early phase. It is a project that was tendered for construction, awarded to a winning candidate and even as construction is on, witnessing majority equity stake transferred to another company.

The pressure exerted by political parties on the subject of naming, lands at the doorstep of the main state agency invested in the project -- CIDCO. However, the said entity is a minority shareholder with 26 per cent equity stake. The remaining 74 per cent is with Mumbai International Airport Limited (MIAL), wherein Adani Enterprises acquired ownership control, leaving 26 per cent for the Airports Authority of India.

Adani's acquisition of a majority stake in MIAL happened in February 2021.

As per news reports, on June 10, the state government decided to name the new airport after Shiv Sena supremo, the late Bal Thackeray. It prompted protests from those wishing that the airport be named after the late D B Patil, held dear by Project Affected Persons (PAP).

They decided to organise a gherao in Belapur, Navi Mumbai on June 24. Also alleged was that the state's June 10 move contradicted its promise of further discussions before freezing the name. 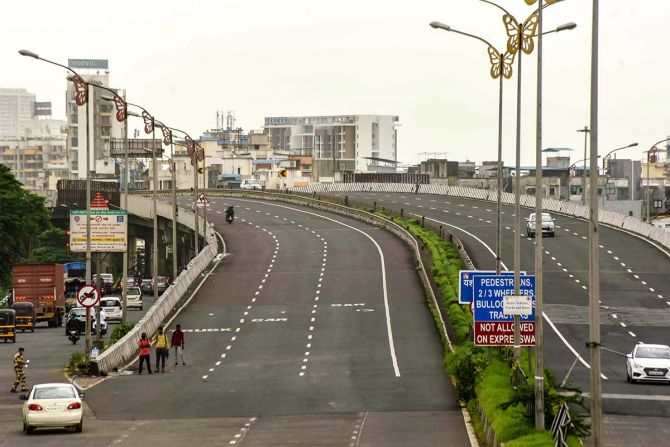 IMAGE: The Mumbai-Pune Expressway wears a deserted look due to a protest over the naming of the under-construction Navi Mumbai International Airport, June 24, 2021. Photograph: PTI Photo

Around June 22, the residents of Navi Mumbai were treated to media reports of looming road closure and Section 144 as large numbers of agitators were expected to assemble for the June 24 protest. This was despite the whole Mumbai region hammered during COVID-19's second wave and pandemic protocols still in place.

Although Navi Mumbai managed to emerge from the second wave of COVID-19 meriting a Level-2 unlock, it was far from being in the clear. Any crowding and assembly in large numbers risks fresh spread of infection, setting the region back on the unlock grid. It means return of tighter restrictions.

Following the earlier grant of permission for new name to the project, on June 23, the revised ownership pattern for the Navi Mumbai project was also approved by the Maharashtra government.

Meanwhile, the BJP threw its weight behind the lobby seeking to name the airport after D B Patil.

A third angle was opened up by Raj Thackeray with his suggestion that continuing the tradition at the existing Mumbai airport, the new airport be named after Maharashtra's famous warrior-king, Chhatrapati Shivaji.

The current Maharashtra government is an alliance between the Shiv Sena, Nationalist Congress Party and the Congress. Both the NCP and the Congress have maintained a studied silence on the matter except for a passing observation from NCP leader Chhagan Bhujbal that naming the airport after the late industrialist and pioneer of aviation in India, J R D Tata, may be apt. 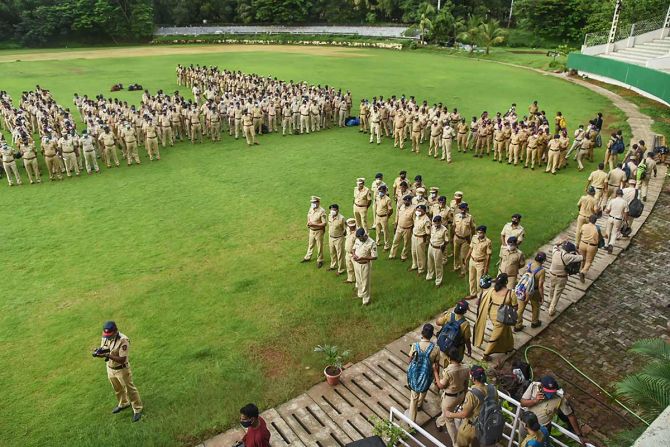 IMAGE: Police personnel assemble at the Rajiv Gandhi Stadium in CBD Belapur, amid speculation of protests on June 24 against the naming of the Navi Mumbai International Airport, June 23, 2021. Photograph: PTI Photo

Politics typically entails competition between opposing sides. That objective, our parties successfully achieved. They aligned themselves on two sides of a divide and converged close to 25,000 people (number as reported in the media) at Belapur on June 24.

The authorities reportedly tried to convince the protesters to give up their plan, but to no avail. Given how the state had managed the name approval process, there was probably no inclination on the other side to be reasonable.

Amidst this stand-off, the residents of nearby suburbs who have nothing to do with the airport, its name or the political tussle but who would be collateral damage should the gathering trigger a bout of COVID-19, lay forgotten.

Under such circumstances, it is normal for a citizenry to wonder how compelling the issue provoking the protests of June 24, is.

For example, while the farmers' protest in Delhi inconvenienced people and continued through days of pandemic, at its heart were questions of livelihood, questionable farm laws and accruing government insensitivity to how farmers' responses were handled.

In the balance therefore, you notice the existence of a legitimate grievance.

Cast into the same matrix, how justified is a large-scale protest over the name of an airport?

Will aviation technology or flight operations in Navi Mumbai suffer a setback if the airport sticks to place name and skirts personalities altogether?

On the other hand, the project's history to date has been characterized by opposition at various stages.

For the latter - they are the ones who give up so that others may have - it is likely that the airport's name means a lot. However, the whole issue appalls at a fundamental level because most of us don't book an air ticket remembering the source airport and the one, we are flying to, by their name.

It is always place; you fly from one place to another. The destination code on airline tickets is also largely built around destination, not airport name.

For sure, the name comes into play when airports are several in a city. But even in Mumbai, we still talk of Santa Cruz and Sahar, domestic and international.

If the project had continued as an international airport identified by the name of the place -- Navi Mumbai -- none of this drama would have cropped up. That we are beset with the current controversy is proof of there being no such vision in politics.

Deed done, the protesters and the political parties milking the divide would have dusted their backs and gone home.

All the wait and watch for what may happen next rests with the residents. One wishes better sense prevailed.

Hopefully, next will only be a name. 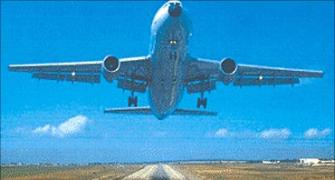 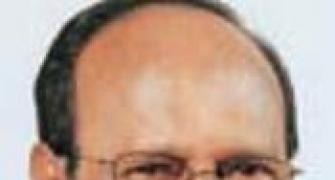 'The Navi Mumbai airport must take off' 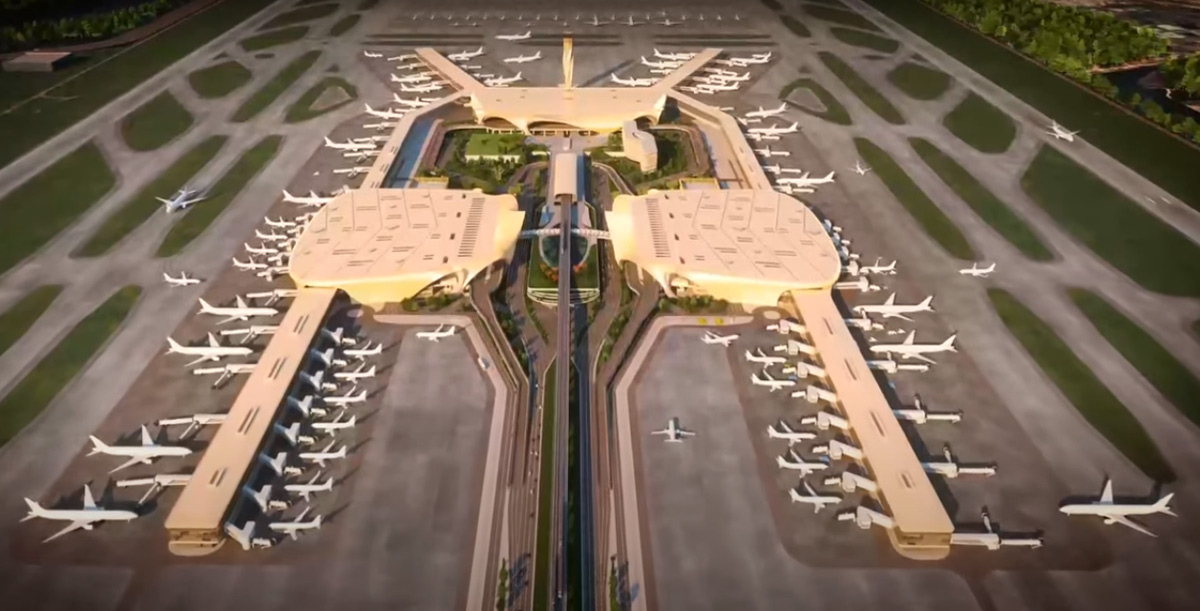 Navi Mumbai airport to be named after Bal Thackeray 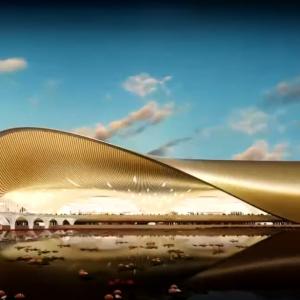