People may line up to see Rahul Gandhi, given he is currently, the only major politician speaking of inflation and unemployment in an India bombarded daily by Right-wing delusion.
The challenge is how to transfer the goodwill into votes when the object of curiosity is surrounded by usual suspects and sycophants, observes Shyam G Menon. 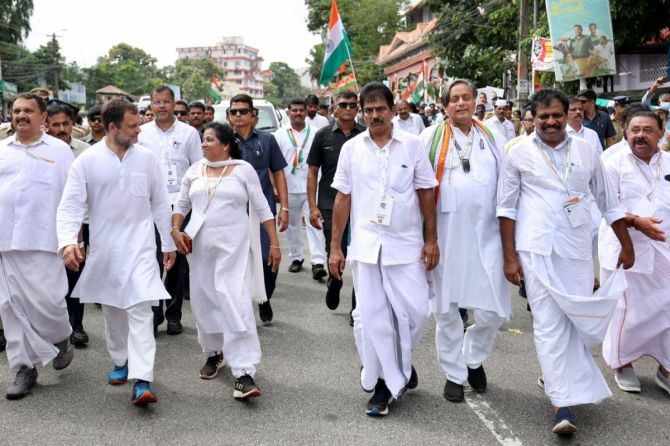 Early morning, September 12, the quietness of the small restaurant I was in, was disturbed by the sound of loudspeakers announcing the imminent arrival of Rahul Gandhi.

While I was aware of the Congress leader expected in the city, I was amazed by the early hour.

Breakfast had, I stepped out to watch. The shops on Thiruvananthapuram's MG Road were barely open.

But the staff came out to watch. As did a family with a house located right next to MG Road.

In era of smartphones and selfies, people on the footpath kept their phones ready for the spectacle of the Kanyakumari-Kashmir yatra.

A while later, Rahul Gandhi appeared. He was walking comfortably at a brisk pace.

Next to him, the familiar faces of local politics tried to match it.

The strain showed. The typical Malayali politician has rarely been an emblem of physical fitness.

The contingent wasn't massive; something surprising for a political yatra.

Coupled with the relatively fast pace at which the walkers went by, its plus point was road blocked for less duration than normally associated with displays of political strength.

In about 15 minutes the road was clear again. Half an hour later, at a more congested part of the city's arterial road, I got trapped in the block caused by yatra and growing traffic.

But that too wasn't for long. Compared to how Thiruvananthapuram had imagined the day in store, Rahul Gandhi's yatra was a smooth exercise.

The Wayanad MP walked through Kerala's capital on the morning of the final day of Tourism Week celebrations.

Set around Onam, the celebrations culminate in an evening procession, for which the main road is shut to traffic.

Consequently, the day of Rahul Gandhi's arrival in the city had grown to worrisome proportion in advance.

That's why, the smooth passage of the yatra -- its healthy pace and manageable size -- merit mention.

The evening of Rahul Gandhi's yatra reaching Thiruvananthapuram, I joined the crowds awaiting the second procession of the day -- the Onam procession.

I was seeing it again after a few decades. It used to feel every bit a people's show.

This year, a cavalcade of vehicles -- Chief Minister Pinarayi Vijayan and his ministers -- drove past slowly at the head of the procession.

It was a moment indulging our fascination for power.

It also made what followed, resemble a gift from above rather than the people's own.

It's a mistake going on in India for several years now (certainly since 2013).

The challenge in today's times is how processions and rallies can happen without displays of collective power triggering cynicism in the public. Compared to the compactness and efficient passage one saw on September 12, the Congress yatra as witnessed in Kayamkulam on September 17, was closer to the conventional.

GDM Auditorium, where Mr Gandhi was that afternoon, was in a lane and a veritable crowd of party workers had gathered outside.

Security personnel had a tough time clearing space for the Congress leader's vehicle to maneuver its way to the start point of the evening's walk.

Less than two kilometres away, people living alongside National Highway 66 were already out in the blazing sun to see the yatra.

For a long time, even as lines of committed yatra-participants walked by, there was no sign of Mr Gandhi or the main column.

"This is quite dispiriting," an elderly woman, tired of the wait and the blazing sun, said.

Much later, when Mr Gandhi appeared it was unlikely that the sight managed to cheer her up.

He walked within a roped-off space; the rope held by a large number of police personnel and guards.

The informal ambiance (despite rope) I saw in Thiruvananthapuram was absent.

From behind the wall of security personnel, I saw Mr Gandhi and a cluster of khadi-clad usual suspects near him.

Behind them came a large procession of mostly Congress workers followed by the vehicles facilitating their assembly.

Beyond the ropes on both sides of the road, a wave of onlookers and supporters swept forward swamping the likes of the old woman. 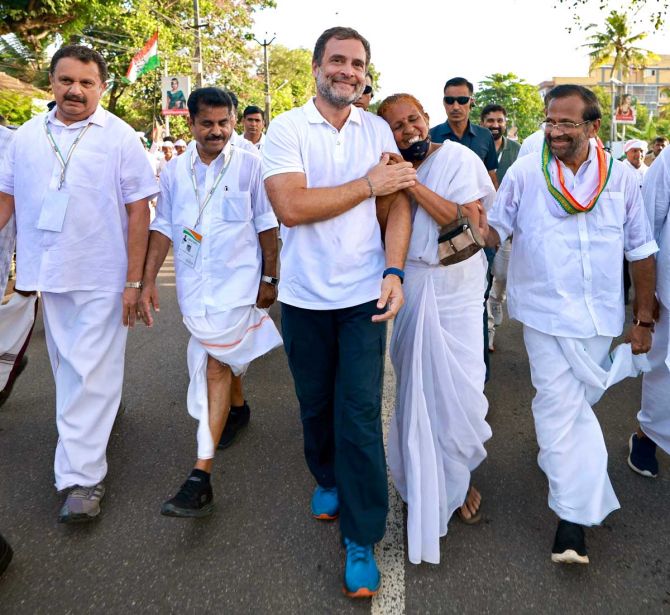 The Congress flag most seen at the yatra -- it featured the charkha -- belonged to an era preceding the birth of the party's human palm-symbol.

None of the yatra participants I asked could answer what the current use of the old flag signified.

Although I will give the Congress credit for launching a yatra, I doubt if the journey will serve to check the Congress's decline.

The party's revival is certainly tied to the electorate being convinced that the Congress can exist without a perennial umbilical cord to the Nehru-Gandhi family.

The reason is simple -- leaders come and go, but parties are expected to endure.

People may line up to see Rahul Gandhi, given he is a former prime minister's son and currently, the only major politician speaking of inflation and unemployment in an India bombarded daily by Right-wing delusion. He is also young.

The challenge is how to transfer the goodwill into votes when the object of curiosity is surrounded by usual suspects and sycophants.

A great example herein is the habit of office bearers from Kerala to call the Congress headquarters, 'High Command'.

In contrast, walking can be a leveler. Where is high and low when all have their feet on the same ground?

The hero is walking, not politics Besides showcasing Malayalam rock, it was fantastic music around the simplest of human activities.

For me, Rahul Gandhi's yatra is less a case of political attraction and more one of novelty.

Senior politicians like Jairam Ramesh may talk of the unifying nature of the yatra.

Given these days of digital technology, smartphones and vitriolic battles on social media, I will wait to see how correct that observation is.

But there is without doubt a visceral pull in walking far, for days. That's an idea that attracts.

Forget the smartphone; keep one leg before the other, keep walking.

Centuries ago, Kerala produced a great traveler in the first Shankaracharya.

It is difficult to imagine contemporary Kerala represented by the matrix of 1.5 crore vehicles for its 3.5 crore inhabitants, as descended from such sensibility.

The day after Rahul Gandhi's yatra passed through Thiruvananthapuram, I was back at that small restaurant.

It was the hour of evening tea and a gang of those exited early from their office was at the next table.

One of them quipped, "What is this? Important politicians drive to their meetings and meeting over, they drive back. This fellow is walking from one place to the next!"

A murmur of approvals and dismissive nods followed. None of them seemed the sort who would get up and stretch a limb or break with convention.

The specter of the traditional getting agitated is among signs of the yatra provoking thought. On September 12, on Thiruvananthapuram's MG Road, as a citizen who disagrees with Right-wing politics, the sight of Rahul Gandhi walking past, impressed me for nothing but this -- each of us, fed visions and ideas about this country as authored by others, deserves to leave our cafes of gossip and, walk.

Explore on one's own.

Further, a country's character is not decided by what the majority concludes about a land and its culture after such exploration.

It is decided by the majority -- indeed all - agreeing that at all times, there must be the freedom to explore and find out on one's own.

Walking is about free, open country. Hopefully one day, I find myself in a cafe where they raise a toast to walking. SUV-politics can keep away.

Between the two -- the politics of walking and the established patriarchal politics of motorised arrogance -- lay a world of difference in insight, conduct and eventually, perception.

Who said walking is simple?