The West uses asanas as a therapy for physical wellness, but Indians look at yoga as one of the nine Darsanas or schools of philosophy.
Why must Indians adjust their time-tested system because of what the West needs, asks Sanjeev Nayyar. 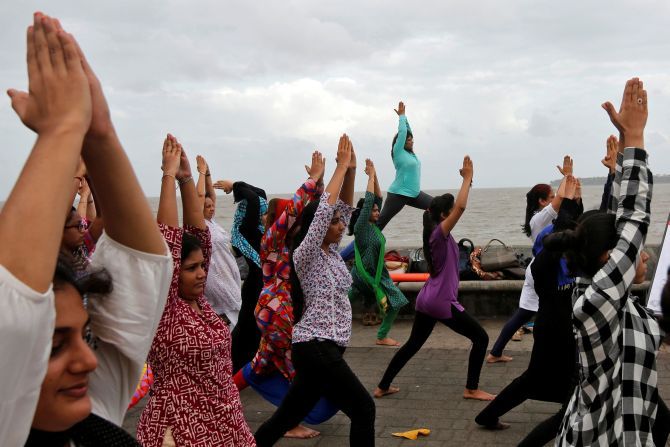 In the last week of December I attended the 9th International Conference 2018 at Kaivalyadhama, where the theme was 'Yoga as therapy: scope, evidence, and evolution'. Among the many insightful conversations was a discussion on 'Standardisation in yoga as therapy -- to be or not to be' by a panel consisting of eminent yoga gurus and teachers from India and abroad.

The issue came up for discussion because, with yoga therapy's popularity and the corresponding increase in number of therapists, a need is being felt that pre-determined therapy standards be laid down so that every patient is reassured of quality treatment -- just like in allopathic medicine.

According to Pondicherry-based yogacharya Dr Ananda Balayogi Bhavanani, "Yoga aims at enabling the individual to attain and maintain a dynamic sukha sthanam that may be defined as a dynamic sense of physical, mental and spiritual well-being." A yoga therapist is one who helps another achieve these goals.

Some of the views expressed in this very stimulating discussion were:

Modern medicine has standards, so should yoga.

A panellist asked for standards because a therapist asked a patient to do an asana without knowing that he had recently undergone a hernia operation.

Another said standardisation of therapy was not possible, but what was required were 'standards for therapy'. Prescribed treatment should be documented and record maintained, just as done by allopathic doctors or in a hospital.

Yet another stated that there were so many different schools of yoga in India, each teaching yoga in a different way, so how practical would it be to have standards for therapy because every school has a different solution?

In Europe leading yoga practitioners have got together and are trying to have an informal agreement on therapy standards.

It was generally agreed that we need standards (for maintaining excellence and safety in patient care) but not within the modern medicinal framework.

The obvious question was, who would lay down these standards?

If India were to have a certifying body like IAYT, who would create that body and appoint the members to run it?

If the body allowed back-door entry to the government, it would lead to interference, lobbying for posts and become one more bureaucratic body.

A panellist said yoga had survived and prospered for over 2,000 without standardisation or standards as the West knows it, so what was the need now.

Another said that incorrect diagnosis or the patient not disclosing medical information happens in modern medicine too, so should a few incidents necessitate the need for standards? Incidentally, my own mother died due to medical negligence by a leading allopathic hospital.

There were a few light-hearted remarks on allopathic doctors recommending asanas and therapists making tall claims.

Based on the above I have the following observations to make:

One, it appears that the need to have standardisation in yoga as therapy is felt more in the West, where it has become a highly lucrative profession.

For these yogis, yoga was a vehicle to achieve self-realisation unlike in the West where the asanas aspect of Yoga is emphasised and therapy is a source of livelihood.

Simply put, the West uses asanas as a therapy for physical wellness, but Indians look at yoga as one of the nine Darsanas or schools of philosophy.

The moot point is, why must Indians adjust their time-tested system because of what the West needs?

Two, what differentiates yoga and ayurveda from modern medicine is that the former is customised to individual needs, looks at the real cause of an ailment and your body as an integrated being, while the latter focuses primarily on symptomatic management.

Note that standardisation would go against the basic grain of yoga where the constitution of each person is understood and a solution suggested.

The minute one has a standard, we shall kill the creativity, freedom and experimentation, which is the essence of Sanatana Dharma.

Three, if each therapy is documented like in modern medicine, it would suffer from the issue of standardisation as referred to above.

Note that knowledge of yoga comes through following Patanjali's Ashtanga Yoga or eight-fold path (Yama, Niyama, Asana, Pranayama, Pratyahara, Dharana, Dhyana and Samadhi) and is not something that can be learnt from a book.

So documenting for worldwide sharing would go against the essence of yoga Darsana, not to miss issues of copyright thereafter.

Pravrajika Brahmaprana, resident minister of the Ramakrishna Vedanta Society of North Texas, wrote that 'It is no mistake that Swami Vivekananda's Raja Yoga, his commentary on Patanjali's Yoga Sutra, along with his related Raja Yoga classes, were presented in London and the US, as they comprise one of the Vedanta movement's greatest gifts to the contemporary Western world.'*

It is widely known that neither have US nor Europe or any company there offering yoga therapy paid any royalty to India for using its yogic knowledge. It took Prime Minister Modi to flag this issue during a recent US visit.

The newly released 2016 (external link) 'Yoga in America' study by the Yoga Journal and Yoga Alliance shows that the annual spend on yoga classes, clothing, equipment and accessories has gone up from $10 billion to $16 billion in the past four years.

This gives you a sense of the monies involved, hence the desire to create a standard, ownership of copyright flows from that.

Four, India has so many schools of yoga, like Classical Yoga, Iyengar Yoga, Viniyoga to name a few. Every yoga guru used insights to create their unique way of doing asanas and interpreting the Yoga Sutras.

Getting various schools to follow a sort of standardisation is like saying there should be only one commentary on the Bhagavad Gita.

Chandigarh-based author and Kriyaacharya Jyoti Subramaniam says 'In Sanatan Bharat everything is alive... whether a practice or philosophy, so cementing yoga in a box may not be the answer. Keeping the basic text the same, the Bhagavad Gita can be interpreted and understood by a child of nine to an adult of 90 according to their own stage of evolution. We could look at a similar system in understanding yoga sadhana, so the original Sanskrit terminology of Patajali kept intact while teaching.'

'Recently I was teaching the moolabandha and a foreign student exclaimed, 'Oh Kegel exercise', which I later realised was a complete rip-off of the various bandhas in yoga! By strongly emphasising the use of original words for techniques rather than diluting them to other languages will lead people to the source and keep it uncorrupted.'

'The way to counter plagiarism is for our acharyas and gurus to write more. All associated with yoga must showcase India's knowledge worldwide.'

Surely, there would be cases where a particular asana is not done correctly or patient's past history ignored. The solution lies in, at the outset, asking every patient for their medical history. After all, one does not stop flying because of one plane crashing.

Having said that, Mumbai-based consulting general surgeon Dr Amit Thadani says, 'What individual yoga schools in India must do is to ensure that the yoga instructors follow the methods and techniques perfectly. Some standardisation of the training course for yoga instructors, for example, to help ensure that the trainer has a functional knowledge of anatomy and the musculoskeletal system and hence knows which asana to avoid in which patient, apart from knowing the correct techniques of performing the asanas.'

The issue of trying to fit Indian thought (yoga as therapy) into a Western framework (modern medicine) is symptomatic of a deeper malaise. We try to adjust ourselves to others needs and lack the ability to hold our ground.

Instead of asking the world to pay India royalty for using the knowledge of yoga we are debating 'standardisation in yoga as therapy', which is not an Indian need. Debates are healthy, but not when we are trying to change our thinking to suit another.

Indians must also realise that some in the West use Indic knowledge and package as it as their own. As US-based scholar and author Rajiv Malhotra said, 'The Anthroposophical Society that was founded by Rudolf Steiner, was formerly with the theosophists where he picked up his main ideas from Hinduism, and where J Krishnamurti later became the head. The huge movement known as 'Mindfulness Meditation' is nothing other than Vipassana and its American copyright claimant Jon Kabat-Zinn learned it from S N Goenka. 'Lucid Dreaming' is a technique widely taught in the USA including the US army and various medical centres, but it is in fact Yoga Nidra.'

Let me humbly state that Indians suffer from a basic problem, we respond rather than create.

If one keeps on publishing our understanding of the truth, history and Darsanas, others will be careful with what they write. Instead, we are forever responding.

Our response creates controversy and makes their books sell more. But I must add that things are changing.

The purpose of this article is not to find fault with the debate, thoughts expressed therein or the panellists. It only seeks to make a deeper point on why Indians must stand up for what is theirs, focus on creating and sharing knowledge aggressively without losing the essence of Sanatana Dharma.

The author is not bothered about countries not paying royalty for yoga. Bharat ka Swadharma is to selflessly share its knowledge with the world.