'Suspect all, fix all.'
'It is this mindset that begins at the very top of an establishment and then trickles down and across,' notes Shekhar Gupta. 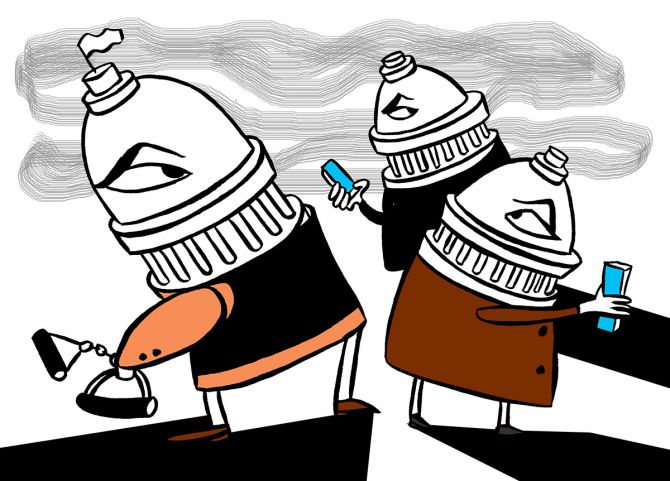 Are we nuts to be calling our country now a National Suspicion State? If you google it, you do not find that description.

Unlike, say, for National Security State as we describe Pakistan and China, where the army and the party, respectively, guard not just the territorial but also ideological boundaries of the state and the citizen.

I write an occasional series called 'Writings On The Wall'.

That means, literally, reading what's written, painted, sold on the walls to figure out where some part of the country, and the neighbourhood is headed.

Travelling through Pakistan for one such idea, I was gathering plenty of evidence to establish its unique status in the subcontinent as a National Security State.

But I needed the smoking gun: A telling writing on a wall.

Not knowing Urdu was a disadvantage, but you know what, who seeketh, findeth.

I found it just when I was getting my passport stamped to return home at Wagah.

It was a signboard on top of the immigration window.

It read: We respect all, we suspect all.

I got into a conversation with the immigration cop while another one checked my iPad photo archives to check if there was anything objectionable, and was told quite cordially why they needed to be extra suspicious for their safety, and mine of course.

That a National Security State should also be suspicious of all, stands to reason.

But a Constitutional Republic run by democratic institutions?

In July last year, after Narendra Modi had returned to power with a larger majority in an election built on national security, I had written that while he will continue this focus, he wasn't about to turn India into a National Security State.

Because we all know what it did to Pakistan.

But two questions arise: Can an eternally suspicious State be anything but that?

And second, is India on its way to becoming something different from what we have known yet? A National Suspicion State?

We put a question mark there to initiate a debate.

Let's check some facts out, giving everybody, most of all ourselves, the benefit of doubt.

To say that the Modi government is unique in hating criticism and critics will be a lie.

Through the decades, it's impossible to name a government that loved criticism.

Not react badly to criticism.

The public condemnation and shaming of critics picked up pace with the rise of social media.

Which pretty much coincided with the Anna movement, one following the other.

Again, to say that only this government is using draconian laws like National Security Act and UAPA (Unlawful Activities Prevention Act) or Foreign Contributions Regulation Act (FCRA) will be unfair.

These laws were designed and strengthened by Congress governments in the past.

These have been used and misused by all.

The same argument would apply to surveillance.

Much of the surveillance machinery and technology the Modi government is using today was put in place by the UPA, essentially post 9/11 and 26/11.

These include the Big Daddy of all eavesdroppers, NTRO.

Powers of wire-tapping were also widely distributed to various agencies in that period, not kept confined to the home and defence ministries, or conventional agencies like Intelligence Bureau and R&AW.

It was somewhere then that the finance ministry became the main machine for wire-tapping, and of leaks too.

So, what are we complaining about now?

Check your own phone, if you are a public figure, in public debate or somebody who deals with public figures or even usual bureaucracy.

How many of the people you routinely reach out to talk to you on normal land lines or mobile networks? WhatsApp was in fashion some time back, but after revelations of the Israeli snooping agency, its footprint in India and general suspicion about its parent Facebook, that disappeared too.

It has to be an odd situation where so many politicians, even of the ruling party, and bureaucrats use Telegram (now losing trust, I believe), Signal and maybe some others I might not be familiar with.

This marks an environment laden with suspicion.

And we can't blame Zhenhua's data snoopers for it.

Those of us in public debate have dealt with intolerance of criticism by governments in the past, going back to Indira Gandhi's.

Her government was furious when I broke the story of Tamil Tigers' training camps in January 1984 and called India Today (where I then worked) an anti-national magazine.

Just as she had done the previous year when the magazine carried detailed, picture-filled coverage on the Nellie killings at a particularly inopportune time from her point of view because the NAM summit was on in Delhi.

Now, I called a bunch of people on different sides, in politics, government and public debate to ask if there is a difference now.

The answer I got from most of them was, in the past you know those in the establishment may stop speaking with you for some time.

Or be unhelpful and sullen.

Or call, complain and impute motives.

Then came the post-2010 phase of public shaming with the Anna movement.

It was followed by denial of access and boycotts.

But you did not have to worry about the government filing cases against you.

That is the change now.

You want to know what I mean, ask Sanjay Singh, an AAP member of the Rajya Sabha.

He made a few statements critical of the Uttar Pradesh government, and has been charged with sedition. Sedition.

A member of our House of Elders has been charged with sedition for criticising a state government. Think about it.

Where do you go when such a case filed against you in a democracy, but the courts? Then, the courts take their time.

Partly because the process is the punishment but partly also because they are also getting caught in the same 'we suspect all' mindset.

As a result, the outcome you have is, instead of innocent until proven guilty, you become guilty until proven innocent.

That is at least the flavour of most of our bail hearings now.

In addition, there is the terror of trial by media leaks and conspiracy theorising.

Or, watch the judge insisting Arun Shourie be charged with corruption in the Vajpayee government's disinvestment when the CBI says it has no evidence.

Every now and then the Supreme Court gives us a gift like the right to privacy judgement or the tough comments on media trials, but institutionally, does the higher judiciary even retain the power to have these wishes carried out? It is something for them to debate.

Particularly when there seems to be a clear algorithmic relationship now between a judge's seniority and the appearance of tough cases against him or members of his close family.

Suspect all, fix all.

It is this mindset that begins at the very top of an establishment and then trickles down and across.

It doesn't remain limited to the BJP.

So, Uddhav Thackeray uses every possible law, including legislative privilege, against his critics.

Y S Jagan Mohan Reddy takes all his predecessors and some judiciary in his sweep, and Ashok Gehlot uses sedition against his dissidents.

Evidence from wire-tapping, of course.

Then it becomes a free-for-all.

Like Rhea Chakraborty's harmless exchanges with an avuncular sounding Mahesh Bhatt being put out on media channels with conspiratorial background music.

It could happen to me. And then, fear finds wings: Maybe they can eavesdrop, extrapolate or manipulate stuff and frame me in something awful.

And if 'they' do that, it will be half a lifetime before you get justice, if at all.

This has led us to become a people suspicious of each other.

Some of you might find the description National Suspicion State too drastic.

You may prefer National Suspicion Society.

Or neither. I am merely tossing this up for debate. 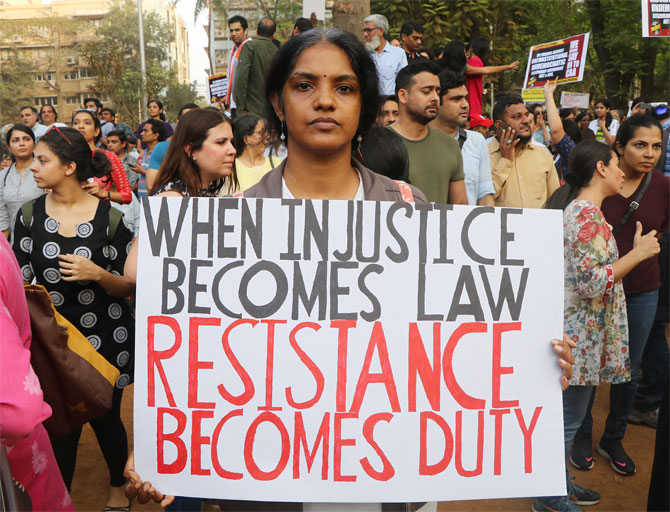 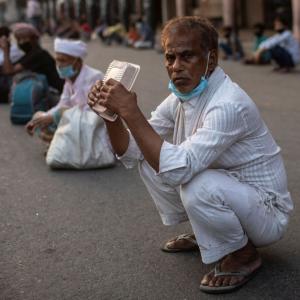