The problem for OPS lies in the fact that most party MLAs believe Sasikala's clan was the force behind their obtaining the party nomination as much as it was Jaya's charisma that won them their seats in the May 2016 assembly polls, N Sathiya Moorthy points out. 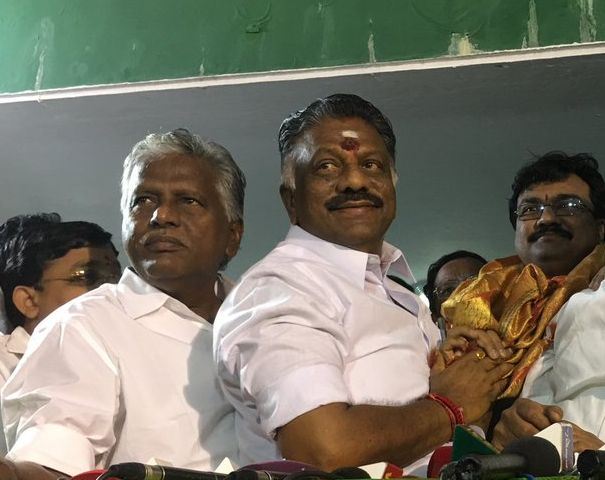 By setting aside Karnataka high court Judge C Kumaraswamy's acquittal order and restoring trial court Judge John Michael Cunha's verdict in its entirety on Tuesday, the Supreme Court has reiterated the nation's confidence in the judiciary, especially in matters of dealing with political bosses who have made it a habit of getting away with blatant corruption -- and go scot-free from the long arms of law as well.

With this, Justices Pinaki Chandra Ghose and Amitava Roy, through their separate but concurring judgments, have also put the Tamil Nadu political tussle over the chief ministership in the court of acting governor, Ch Vidyasagar Rao, and through him the state assembly, where a floor test has become imminent and purposeful.

That was neither the purpose of the Supreme Court case nor the verdict, but the restoration of the verdict of conviction and four-year jail term for All India Anna Dravida Munnetra Kazhagam general secretary V K Sasikala means precisely that.

She had staked her claim to become chief minister after incumbent O Panneerselvam, or OPS, had quit, purportedly voluntarily -- but only to claim later that it was done under force.

By upholding Judge Cunha's verdict in its entirety, the Supreme Court had also restored the trial court's conviction of A-1, the late chief minister J Jayalalithaa, but 'abated' the case against her following her death on December 5, 2016.

Without upholding the conviction against Jaya, the 'abettors' and co-conspirators under the law, starting with the Prevention of Corruption Act, could not have been sentenced, either.

More importantly, the Supreme Court has restored the trial court's order on the confiscation/forfeiture of the attached property of the accused, running into crores of rupees.

This should serve as a body blow for corrupt politicians across the board, some of whom might hope to serve out a relatively short term in prison and still leave behind massive amounts of ill-gotten wealth for their heirs and family members to enjoy over a few generations.

In theoretical terms, the Supreme Court order could go beyond the Cunha verdict, prescribing four year jail term for all accused and a Rs 100 crore (Rs 1 billion) fine for Jaya, followed by Rs 10 crore (Rs 100 million) each against Sasikala and her kin, namely, Illavarasi and V N Sudhakaran.

Ironically, Sudhakaran fell out of Jaya-Sasi's favour long ago, but is paying for past sins, which went beyond his wedding.

It is another matter that Sudhakaran was not shown as spending any money, but had made money elsewhere as a co-conspirator of Jayalalithaa, who was a 'public servant' under the Prevention of Corruption Act, in her first term as chief minister, 1991 to 1996.

Issues about Sasikala and the rest surrendering before the Bangalore trial court (and not in Tamil Nadu), as ordained by the Supreme Court, and the two women -- Sasikala and Ilavarasi -- being possibly sent to Karnataka's women only jail in Gulburga afterward, are all matters of detail.

So could well be the possibilities of Sasikala and Co filing a review petition before the Supreme Court, which by convention, would remit the case only to the same bench that had pronounced the verdict.

With Justice Ghose set to retire soon, the timing of the filing of the review petition, depending on the time available for the convicts in the matter, could decide the composition of the bench, if it came to that.

Should the convicts move a review petition, then the Karnataka government, as the prosecutor, too could consider seeking the restoration of Jaya's fine in the light of her conviction, and recover the same from her estate, including her famed Poes Garden residence in upmarket Chennai if it came to that.

Just now, the question is no more about the Supreme Court verdict, but about the immediate future, where Governor Rao seemed to be waiting for the same before deciding on the next CM.

Will Rao rush and ask OPS to prove his majority through a floor test?

At her last news conference on Monday night at the suburban Koovathoor private resort, off Chennai, where she also displayed all the MLAs claiming to support her, Sasikala said she would not let OPS become CM come what may.

'I will even give my life to save the party,' she declared after it had become known that the Supreme Court would pronounce the wealth case verdict within hours.

The implication was that she would rather make anyone else as the party's CM designate, elected by a 'majority' of AIADMK legislators even as OPS is struggling with the numbers.

Even an hour before the verdict, the OPS camp could boast only of a trickle of MLAs from among the 134 AIADMK legislators, of whom a prospective CM had to muster 119 at the very least.

The numbers can go up post the verdict. Yet, it is unclear if it could cross the required three digit figure.

The problem for OPS lies in the fact that most party MLAs believe that Sasikala's clan was the force behind their obtaining the party nomination as much as it was Jaya's charisma that had won them their seats in the May 2016 assembly polls.

It is this loyalty that has tied them down just as it is the local animosity with a party senior close to the Sasikala clan that is the main cause for the constant defection of AIADMK members of Parliament to the OPS camp over the past days.

The Sasikala camp has since elected outgoing minister, 'Edappadi' Palaniswamy as its new CM candidate in her place.

The Supreme Court verdict does not impact on her party position.

As if to make the point, she sacked OPS from the party's primary membership soon after the verdict.

Yet, with imprisonment outside Tamil Nadu for four years and total disqualification for 10, the family may look for a replacement after a time.

It will all depend on who wins the trust vote, if at all, and who hijacks the party.

In case of both sides losing with the DMK voting against it, the Two Leaves symbol could get frozen as had happened after founder MGR's death in 1987.

Should the governor adhere to Attorney General Mukund Rohatgi's much publicised advice to call for a 'combined floor test' of the two CM claimants, including OPS?

In media interviews on Monday, Rohatgi referred to the 1998 Supreme Court verdict in the Jagdambika Pal case from UP, where Kalyan Singh was the other claimant.

However, in matters of detail, the Tamil Nadu situation is different.

Here, OPS is technically no more the CM, or even a claimant under the law, as the governor himself had accepted his earlier resignation.

Unless and until the governor swears in a new CM, as now selected/elected by the Sasikala MLAs, there won't be another to face a floor test, combined or not.

It is still a million rupee question, which again neither the Founding Fathers, nor the Supreme Court judges in the S R Bommai case (1994) or the Jagdambika Pal case (1998) had considered.

Does it mean that the governor should go back to the Supreme Court for advice, keeping the state assembly in suspended animation?

It is more than a Constitutional question, with political conditions and advice to be considered.

Soon after the Supreme Court verdict, the DMK's Leader of the Opposition, M K Stalin, reiterated his earlier call for the governor to discharge his Constitutional duty and initiate moves to install a stable, popular government in the state.

That does not mean the DMK would back one faction or the other in the rival AIADMK, if either or both of them fall short of numbers.

Nor did he indicate that the DMK was too eager to come to power on its own, but with support from an AIADMK splinter group if any that had the numbers to defeat the other in a floor test and might still consider backing a DMK government, from within or outside the same.