'The unprecedented bitterness and rancour that marked this election campaign need not spill over into government and governance,' says Saisuresh Sivaswamy. 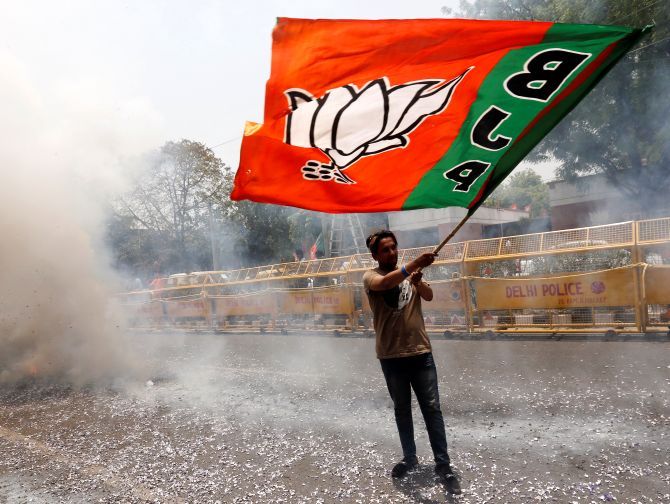 To say that the current political discourse in India is fragmented would be a grave understatement.

Indeed, coming after the salubrious years of Prime Minister Atal Bihari Vajpayee, who went out of his way to overcome the tag of pariah party conferred on a united Opposition in the 1990s, which saw his first government cut short to 13 days in power, and the apolitical Dr Manmohan Singh who rarely if ever uttered a harsh word in public, the last five years have been like a rollercoaster ride on steroids.

Not a week passed without the establishment and the Opposition indulging in parry and thrust politics of the worst kind.

But it would be unfair to pin it all on the Narendra Damodardas Modi era beginning with the no-holds-barred election campaign of 2014.

The relatively calm years between 1998 and 2014 may make you believe otherwise, but the broken political compact between the government and the Opposition, which has spilled over into other pillars of the democracy like the legislature, judiciary, even the media, not to leave out the armed forces, actually goes way back, to the time of Indira Gandhi.

When you look back to her time, you realise how similar the incumbent and the former prime minister really are.

Both are domineering personalities, authoritarian even, brooked no dissent, and their politics and appeal was centred on the I, Me, Myself mantra.

If Indira was also a divisive and polarising figure, the incumbent prime minister is no balak in the Dandakaranya forest.

That the Rashtriya Swamayamsevak Sangh -- in which the young pracharak Narendra Damodardas Modi would have been learning the ropes when Indira was on the ascendant -- was soft on the Congress, especially the Gandhi-Nehru family, till she broke the democratic compact by imposing the Emergency, was an open secret.

The absence of a political force to call their own -- the Bharatiya Jana Sangh was anything but -- made the Parivar throw in its lot with the next best bet -- and Indira represented continuity. The option, anyway, was the Left and chaos, which was anathema to the RSS.

So did her politics of the take-no-prisoners variety make an impression, even subliminally, on the young pracharak? Alas, we will never know, for the prime minister prefers to talk of everything but his life.

If he was not even remotely influenced by Indira Gandhi, it is eerie how Modi seems to have replicated her brand of politics. He may idolise P V Narasimha Rao, he may revere Vajpayee, even hold a grudging admiration for Dr Singh, treat Rajiv Gandhi like a frenemy, but it is Indira whose mirror image he is the closest to, even if he may see no resemblance.

She was hypercritical of the Opposition as it existed, even scorned them as a bunch of old men.

Plus, she was a master of the message, and a consummate communicator who could seize the idiom of the day to her advantage.

In that she was matchless.

Do these things remind you of someone closer to our timeline?

BJP leaders, when asked about exploiting the Balakot airstrikes in the election season, harked back to, not the Kargil skirmish of their own Vajpayee who too fought an election with the triumph as the backdrop, but Indira Gandhi's 1971 Bangladesh war.

So, even their own point of comparison was not one of their own but a prime minister from the party who their leader vowed to deracinate from India!

Indira's rule was marked her party lying supine before her. It was the time of unforeseen adulation, with one party president even proclaiming 'Indira is India, India is Indira'.

Senior Supreme Court judges may not have held a press conference to share their angst, but the problems in the judiciary could be traced back to her time.

The media was sharply divided over her style of functioning; those critical were not called 'presstitutes', but lumped together with the 'foreign hand' that was never named.

It may not have been the worst of times, but it certainly was not the best of times.

A bout in exile may not have been what the doctor ordered for her, but it was what the voters prescribed in 1977. And when they voted her back in 1980, after a dalliance gone wrong with the Opposition, it was a mellowed Indira Gandhi who assumed office.

This is where the present breaks with the past. The voters, it seems, are now in the mood to reward, not rebuke.

Narendra Modi is back for a second term as prime minister.

So it is a good time to hit the pause button and ask: What now?

With his re-election, Modi has proved a point, and made history.

Being gracious in victory is not a sign of weakness, nor will it make one less than 56 inches around the chest.

The unprecedented bitterness and rancour that marked this election campaign need not spill over into government and governance.

Political rivals need not be considered as lifelong foes. Being co-players on a common stage, perhaps politicians are able to playing a double role, one onstage and another off. But the common man, who gets his cues from their words and deeds, carry the storm they set off into their personal lives.

The acrimony on social media, and the hatred off it, is a direct consequence of the omissions and commissions by the political establishment.

The broken compact of statecraft is at the centre of the crisis afflicting our institutions.

And as the man who mainstreamed it in his five years in office, it is Modi's duty, and responsibility, to roll it back in the next five years.