'Of all the election skirmishes, it is the one between Mamata and Modi that has hit the nadir.'
'Obviously, the prize catch is Bengal where the BJP is determined to make inroads while Mamata is equally determined to keep them out,' notes Saisuresh Sivaswamy. 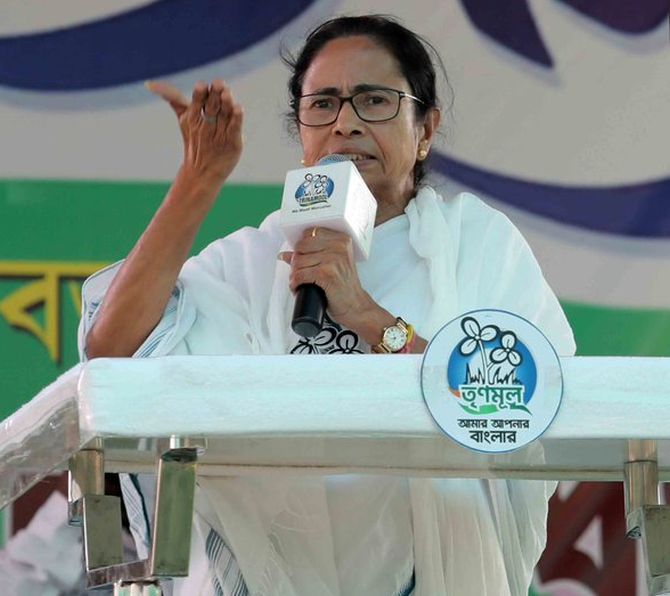 That Uttar Pradesh is the do-or-die state for any political party that hopes to rule India, is a given.

That the Bharatiya Janata Party owes its pre-eminence in the political arena to its dominance over the state, both in the 2014 Lok Sabha election and the assembly election of 2017, is also given.

Hence, the state also walks away with the bulk of the election coverage.

It is a vicious cycle of sorts. Journalists from elsewhere flock to the Hindi belt also because they are familiar with the language, than they are with, say, Bengali or Tamil, in which states the barriers to communication are more daunting.

This imbalance leads to an overwhelming coverage of some states, and not so much of other states, which forms the data base for subsequent election coverage. So you will find more outstation journalists conversant with the caste dynamics of UP's dominant regions than, say, of Bengal's intricacies.

Which, in an election like the one underway, is a handicap, because these two outlier states, Bengal and Tamil Nadu, will prove to be important bellwethers even if they may not determine the electoral outcome.

It is in these two states that the BJP's claims to being a truly national party with a footprint every region and state and not just a token presence will be tested, even if they won't make the prime minister.

That honour will lie with the Hindi-speaking states at least in the near-foreseeable future.

One was of Prime Minister Narendra Damodardas Modi -- who, in the last leg of the elections, seems to have decided on a media outreach like never before. Now you can interpret this either way, as a sign of nerves over a possible reverse that everyone has been forecasting, or as using the media to counter its own criticism of the way the election campaign has been reduced to, both by him and the Opposition, chiefly Mamata Banerjee.

The Zee News interview was conducted away from the heat and dust of electioneering, and was a very detailed one.

But the more interesting interview was the one conducted by Rajdeep Sardesai on India Today TV, with the West Bengal chief minister, who he addressed as Didi, rushing through her padyatra, with the reporter, who towers over her diminutive form, struggling to keep pace with her.

Watching Mamata in action a few questions come to mind.

Do we have another comparable politician in our midst?

Think of her attire of a simple cotton sari and Hawaai chappals, with none of the glamour and glitz politicians -- and in some cases even their spouses -- seem to acquire on reaching high office.

How many chief ministers, or even prime ministers, can you think of who will walk through the town, not a few steps but over a considerable distance? Most, you realise, are comfortable criss-crossing venues in air-conditioned vehicles, addressing the crowds from a distant dais, and vamoosing in a cloud of dust.

You can argue that Mamata's padyatra route was already sanitised, the barricades on both sides of the road kept the public from really reaching out to her, and that she chose the point of mingling with them, not the other way round, and you may be right.

Still, in these days of tiered outreach, it is always refreshing to see someone like Mamata, the quintessential grassroots politician, in action.

Of all the election skirmishes, it is the one between Mamata and Modi that has hit the nadir. Obviously, the prize catch is Bengal where the BJP is determined to make inroads while Mamata is equally determined to keep them out.

'They won't win a single seat in Bengal,' she tells a huffing and puffing Rajdeep, soon after launching into a tirade at the national media who she hints has turned into godi media of the Modi Sarkar. 'It is the regional media which is more important, you have all become the voice of the government.'

Of the election verdict on May 23, she has no doubt. It will be 'Modi hatao, desh bachao,' she says. And what after? Will she, with her sweep of Bengal, throw her hat into the ring for prime minister?

'All the regional parties will come together and decide.'

And will she move to Delhi, an insistent Rajdeep kept at her.

'BJP has sent you to ask if I am going to Delhi,' she snapped at him, all this conversation happening even as she kept her focus very firmly on the people on both sides of the road, greeting them with a Namaste and walking up to them to acknowledge their wishes.

And what role will the Congress play in such a formation, if at all? She didn't tie up with the Congress, so will she invite them to be part of the anti-Modi conclave?

'Why should I tie up with the Congress?' she counter-questions, leaving open the question of its participation in a future, potential non-BJP government.

Of the pull-no-punches verbal bouts between her Modi and her, Mamata is clear where the blame lies.

'Tell Modi to control his party first.' And while at it, 'tell him to respect his elders like L K Advani and Murli Manohar Joshi.'

When Rajdeep again persisted over the drop in election campaign standards, she responded with, 'Mamata is not conducting the elections, the Election Commission is.'

About her outreach style and connect with the voters, Mamata says, 'All others travel in airconditioned cars, whereas I hold padyatras.'

Mamata may deny it, just as Modi does in interview after interview, but governments are vulnerable to anti-incumbency, and so could she be.

The West Bengal chief minister doesn't go as far as Modi, who says there is in fact a pro-incumbency wave across India, but she is equally firm in her mind. 'There is no anti-incumbency in Bengal, you wait for election results day and you will know.'

The politician who coined the phrase 'Ma, Mati, Manush' (mother, motherland, people) is convinced that her arch-rival Modi 'doesn't know what Mati wants.'

Rajdeep also manages to squeeze in a question about Modi's revelation that Mamata sends him kurtas (which he initially messes up saying he sends her saris), does she really do that?

'For Pujo I send kurtas to everyone, not just Modi, this is part of our Bengali culture.'

Mamata shows no signs of flagging after her speed walk, prompting Rajdeep to ask the secret of her energy.

'The public is my energy,' says the chief minister (Modi attributes his Mann ki Shanti to the people), even as the tired journalist drops off, presumably in search of Elections On My Plate to recharge his batteries.