'Amit Shah's trajectory seems unstoppable; no wonder some say the day is not far off when he could be pitching for the top job, and that this is only the first step,' says Saisuresh Sivaswamy. 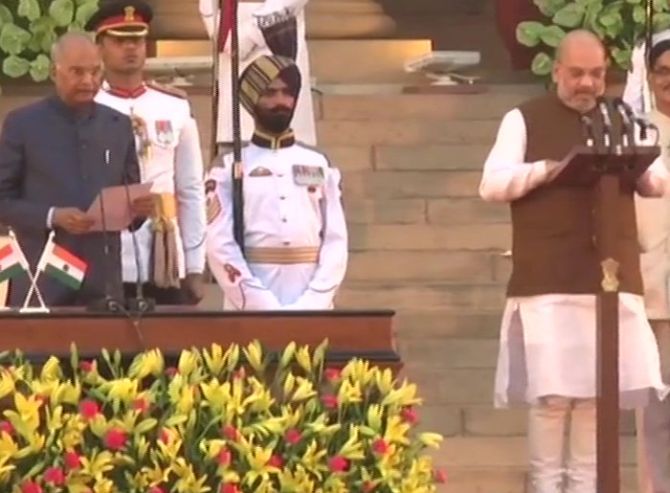 IMAGE: Amit Anilchandra Shah takes the oath of office as a Caibinet minister and swears to defend the Constitution of India. Photograph: Vijay Verma/PTI

Who would have thought just a week ago that a man arrested for murder in July 2010 and externed from Gujarat in October 2010 would become the home minister of India, the overseer of law and order across the country!

Such is the wonder of parliamentary democracy that stains are easily washed in the avalanche of popular mandate, even those from the murder of Graham Staines, if social media is to be believed!

Clearly, the power of the vote and the popularity of the individual trump what is right and wrong, helped along by loopholes built into the system by the very forces who are sworn to defend and protect it.

That the Union Cabinet with men and women far outstripping Amit Anilchandra Shah, the new home minister, has made its peace with his induction is clear. Those unable to must find their names among those left out for various reasons.

Amit Shah's trajectory seems unstoppable; no wonder some say the day is not far off when he could be pitching for the top job, and that this is only the first step.

Which seems in step with the grand vision under which it was decided to move Narendra Damodardas Modi from Gujarat to New Delhi as the BJP's prime ministerial candidate.

All visions need an implementor, and Amit Shah has clearly exceeded his brief.

Having executed Modi's vision of first winning the prime ministerial election and then a re-election, and in between sew up the country for the BJP, he has clearly been primed for the next phase.

As party president Amit Shah was pivotal to the BP's expansion; now, as home minister, he will be pivotal to the Modi government consolidating the gains and ensuring their longevity.

Never before perhaps has a party president and the prime minister had such a synchronous relationship as the one between Modi and Shah.

And when you look across at the travails of its chief Opposition party, the Congress' s woes can be traced back to the dissonance between the two posts, the differences going back all the way to the time of the first prime minister, Jawaharlal Nehru and which became accentuated under his daughter Indira with disastrous consequences for the party, as his great grandson is realising now.

With Modi-Shah, on the other hand, one is the seer, the other the doer.

So what is it that the prime minister wants Shah to do from within the government that cannot be done from outside?

When he announced on the election campaign trail that the new NDA government would introduce the National Register of Citizens -- a Supreme Court mandated and monitored exercise that is currently restricted to Assam -- across the country, Amit Shah was not talking in the air, but was in fact announcing a policy decision on behalf of Modi 2.0.

Illegal immigrants as the BJP's bugbear is nothing new, it has been consistently raising the influx of illegal Bangladesh immigrants -- Muslims, specifically -- into India for years, and the fears of demographic skewing (in other words, constituencies becoming minorities-dominated, like a certain Wayanad in Kerala which caught their attention recently).

During the election campaign Amit Shah likened illegal Muslim immigrants to 'termites', and declared that India would welcome persecuted minorities from the neighbourhood, but only Hindus, Sikhs, Buddhists.

In other words, unlike ancient India that was a beacon to persecuted communities from across the globe -- like the Zoroastrians who have India their home -- the new India is for Indic faiths only. This is now the official government line.

Can an NRC for India work, especially considering that its execution is via the state governments? It should, when you realise that only a handful of states are now with non-BJP outfits, and even as you read this their number may diminish further.

Shah's brief is to iron out any wrinkles in the NRC process.

One nation, one Constitution

The abolition of Article 370 was among the BJP's original demands. Thirty years ago it seemed, like most of its core issues, a pipedream. Today, they are all on the verge of realisation.

For decades Kashmir (not Jammu and Ladakh) has been a bone in the BJP's throat. And the reason was Article 370, which was meant to ensure the border state's continuity in the Indian Union but which the BJP saw as a hindrance to genuine assimilation.

Once ethnic violence and terror drove out Hindu Pandits from the Kashmir valley, it seemed like a question of time before the rest of the country bought into the BJP's line.

Modi 2.0, unlike its predecessor, will certainly drive a hard line on Kashmir, and an effort will be made to abrogate, if not dilute, Articles 370 and 35A.

And as home minister, it will be Amit Shah's task to ensure that this happens. The only hitch: The Rajya Sabha, where the numbers will favour the Modi Sarkar only in the second half of 2020.

Yet another Sangh Parivar core issue that will be realised during Modi 2.0.

That the Ram temple will be built in Ayodhya is not in doubt, the only question is when and how.

A court verdict in September 2010 had facilitated the temple; now the matter lies before the Supreme Court in appeal, and the apex court has resorted to mediation and put off the matter till after the elections.

With the verdict expected later this year, the last hurdle for the temple's construction may be over. Again, it will be up to the home minister to ensure that there is no let-up in law and order when it happens.

The abolition of instant talaq, the Muslim orthodoxy feared and rightly so, may be the thin end of the stick before the introduction of a Uniform Civil Code.

The UCC did not garner much mention during the recent election campaign, but that does not mean the BJP has abandoned the idea. One nation, one people, one law has for long been its demand, and Modi 2.0 will see the government working towards it.

The courts have in the past chastised the government for not implementing a common law, so protestors will not have an avenue for redressal when it happens.

These are not all. Apart from taking forward the Parivar's agenda, Amit Shah's presence in the Union Cabinet will serve one important purpose.

Even while Prime Minister Modi talks of winning over Sabka Vishwas, the home minister will serve as a magnet for the Hindutva forces.

Talk of division of labour!