India has realised that one can only deal with China from a position of strength and that is not palatable to Beijing, observes Dr Rup Narayan Das. 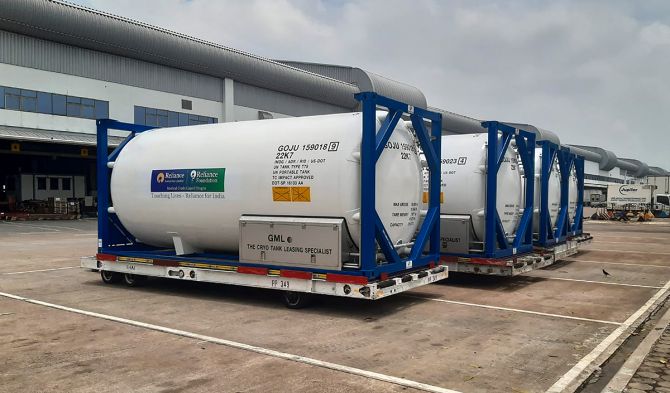 IMAGE: Tankers filled with medical oxygen in Bangkok, Thailand, before being airlifted to India, April 28, 2021. Photograph: Ministry of Home Affairs on Twitter/PTI Photo

After lying low in the wake of the unfortunate clash between the India and Chinese armies at the Line of Actual Control in the Galwan Valley in Ladakh in May last year, there are some overtures from China to mend ties with India.

China's President Xi Jinping last Friday sent a message to Prime Minister Narendra Modi offering China's support to India in dealing with the pandemic which has resulted in loss of human life and suffering.

Although the two leaders shared a virtual platform at the BRICS conference held under the Russian presidency last year, it is for the first time in recent months that Xi wrote a letter to Modi.

'I am very concerned about the recent situation of the COVID-19 pandemic in India, I would like to express sincere sympathies to the Indian government and people,' Xi wrote.

There is no evidence in the public domain to suggest Modi's reaction or response to Xi's letter.

One may, of course, always say that there is nothing to respond.

The ministry of external affairs Web site, which catalogues all of Modi's telephonic conversations with world leaders, does not mention Xi's letter which clearly leads to speculation that New Delhi is not enthused with such perfunctory overtures.

There is mismatch between China's lip service and China's actions on the ground.

External Affairs Minister Dr Subrahmanyam Jaishankar in telephonic conversations with his Chinese counterpart Wang Yi, which was organised at China's behest, said while Indian entities were already in the process of commercially procuring required products and raw materials from suppliers in China, this would be facilitated if various transport corridors and cargo flights remained open and the necessary logistic support ensured expeditiously.

Dr Jaishankar's observation should be seen in conjunction with media reports that the State- run Sichuan Airlines of China, which operates cargo flights to India, had suspended operations causing disruption of procuring oxygen concentrators by private companies.

Foreign Secretary Harsh Vardhan Shringla last week said there was an impact on some supplies following suspension of flights by Sichuan Airlines.

The airline, however, claimed it was working out a new plan to resume services.

This is typical Chinese behaviour. Wang Yi said China would ensure that all required material flow to Indian entities without any delay and that airports, customs and airlines would also be instructed to smoothly facilitate movement of goods.

The Chinese embassy in New Delhi also said that China would encourage and guide Chinese companies to actively participate in facilitating various medical supplies for India, and added that 'suspension of certain commercial cargo flights is a normal business decision. Air and freight channels are unimpeded.'

It is intriguing that in a political system like China where there is seamless connectivity between the government and State-owned enterprises, the political message is not complied with.

This is typical of Chinese strategic behaviour of deception.

China's opaque behaviour is also reflected in its inflexible position in disengagement in the friction points along the Line of Actual Control in Eastern Ladakh which impelled Dr Jaishankar to say that while the process of disengagement had commenced earlier this year, it remained unfinished.

The minister emphasised that it was necessary that this be completed at the earliest and that full restoration of peace and tranquillity at the India-China border would enable progress in the bilateral relationship.

India and China had reached a 5-point agreement to resolve the Eastern Ladakh border row during talks between the two foreign ministers last September on the margins of the Shanghai Cooperation Organisation meeting in Russia.

The way China is making a foray into South Asia much to the chagrin of India's security interests is a matter of concern to India.

When India reached out to neighbouring countries through its successful programme of 'vaccine maitri', China wanted to rope in India in its dubious South Asia outreach to fight the pandemic.

India avoided the trap and spurned the offer, saying its own outreach in the region is more important.

Chinese Defence Minister Wei Fenghe visited Bangladesh and Sri Lanka last week and called on countries in the region to resist 'powers from outside the region sealing up military alliances in South Asia' targeting the India-US-Australia-Japan Quad grouping which is perceived by Beijing as a quasi-military alliance.

India has realised that one can only deal with China from a position of strength and that is not palatable to Beijing.

Dr Rup Narayan Das is a senior fellow of the Indian Council of Social Science Research at the Indian Institute of Public Administration, New Delhi. The views in this column are personal.