What China's real game in Ladakh is

Chushul and Depsang are not vital in this game of Chinese checkers, the Indian Ocean Region is.
Keeping our maritime prowess restricted has to be a key Chinese strategic interest and it would appear that the LAC affair has helped China achieve its aim, points out Vice Admiral Premvir Das (retd). 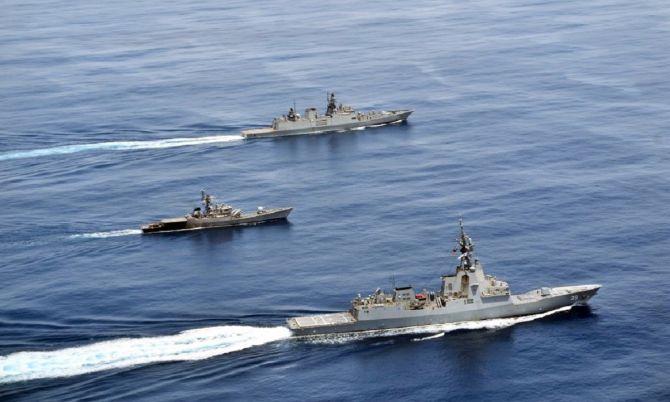 There has been a plethora of writings in the last several months, and from people better informed and more strategically conscious, on what is happening on the Line of Actual Control.

Our best minds are theorising whether we are seeking resolution of 'boundaries' as posited by the foreign ministers of our two countries in their latest five-point joint statement, or finalisation of the LAC as differently conceived by ourselves and by China, or just disengagement.

There are articulations on why China is doing what it is doing. Are they seeking more territory, or are they wanting to put us in our "place", or is there a larger 'strategic' motive?

Our political response to all such articulations is that we will never allow national sovereignty or territorial integrity to be compromised. It seems to this writer that China will be quite content with this stance.

The so-called 'border' with China extends nearly 3,500 km from west to east, call it LAC or whatever. The present confrontation is on its western side in the Ladakh region, in Pangong Tso, Fingers 2 to 8 and Depsang.

Reportedly, forces ranged on each side in this part number around 40,000 troops along with supporting arms and logistics. Some parts of this area are tank territory, while others are high points which, if occupied, can dominate the lower reaches.

Whether the Chinese are somewhere within 15 to 18 km in this region or we are sitting on high ridges overlooking their units somewhere else does not change the nature of the confrontation, which is that the entire scenario is tactical.

Even if it comes to a shooting war, which seems unlikely, the two sides will fight each other for very limited tracts of territory, one to safeguard its land and the other to occupy some of it, for whatever purpose.

Recognition of the predominantly tactical environment is fundamental to our being able to play China at its own game.

So, is the picture larger than what it appears at first glance?

There is general agreement that China's economic might will outstrip that of the US in the next three decades. It is now seeing itself as one of the two great powers of the world alongside the US, if not ahead of it by that time.

Economy is an intrinsic strength, but that alone can take it only thus far; in military power, its navy may be larger in numbers than that of the US even today but qualitatively, it has still many miles to go.

The same is true in the field of sophisticated technologies.

So, it needs to move on these fronts too if the larger strategic goals are to be achieved. For that to happen, it needs to follow the dictum of what the American strategist Fred Hartmann, termed 'Conservation of Enemies' and not their proliferation.

Given the historical context, some such adversaries, present or potential -- Japan -- can just not be wished away.

The question is whether India is to be added to that list.

If we believe Sun Tzu that wars are to be won without fighting them, or the infamous Middle Kingdom aspirations of the Chinese, then it must be assumed that these are not to be achieved on the snow-clad peaks of Ladakh.

We must recognise that China will remain focused on its larger goal and which is to be the leading world power.

There are obvious constraints in its becoming one but clearly the most crucial ones are its limitations in becoming an oceanic power.

The first and most important of these are its inabilities to match US power in the South and East China Seas.

If the capabilities of Japan are added to this mix, that country being a military ally of the Americans, the situation becomes even more grim.

The possibility that China might outmatch even one of them, much less both, is far-fetched.

Any calculation of what the Americans can deploy from their bases in Yokusuka, Guam and Hawaii can only give the shivers to China.

The second of them are its serious vulnerabilities in the Indian Ocean Region (IOR) through which must flow its energy lifeline.

China has sought hard to create facilities in Pakistan, Ethiopia, Seychelles and the Maldives, but these cannot, by any stretch, match the potential maritime power that a well-placed littoral like India can confront them with.

The US capabilities in this part of the world are also substantial, though not on a par with what they are in the western Pacific, and if conjoined with those of India, can make the IOR untenable for the Chinese.

This can put an end to their strategic ambitions.

So, what is the Chinese game on the LAC all about, it may well be asked. If it pushes India further towards the Americans, then it is surely bad strategy if not poor tactics.

The argument that it shows the world the power differential between itself and India is facile as this is already well known. But what it does succeed in doing is to force India to focus its limited resources on a land border which is inconsequential to China's larger interest and, consequently, keep them away from the one area where India can outmatch them and seriously constrain their strategic goals.

This, of course, provided it has the requisite capabilities that can dominate the IOR lifelines including access through the Malacca Straits.

Keeping our maritime prowess restricted has to be a key Chinese strategic interest and it would appear that the LAC affair has helped China achieve its aim.

Looking ahead, India must not get digressed from such clever feints by China which flow from a larger motivation.

We have to treat that country, not Pakistan, as our main adversary and take measures which will ensure that it cannot match us in the area which is vital to its strategic interest.

Chushul and Depsang are not vital in this game of Chinese checkers, the IOR is.

Vice Admiral Premvir Das (retd) is a former commander-in-chief of the Eastern Naval Command. He has also served as member of the National Security Advisory Board.