Armed forces and the police can only ensure that violence is kept under control but for any kind of lasting peace, politicians will have to find an answer to the perception that the Indian State is anti-Islam. Therein lies the biggest challenge to the Modi government, says Colonel Anil A Athale (retired). 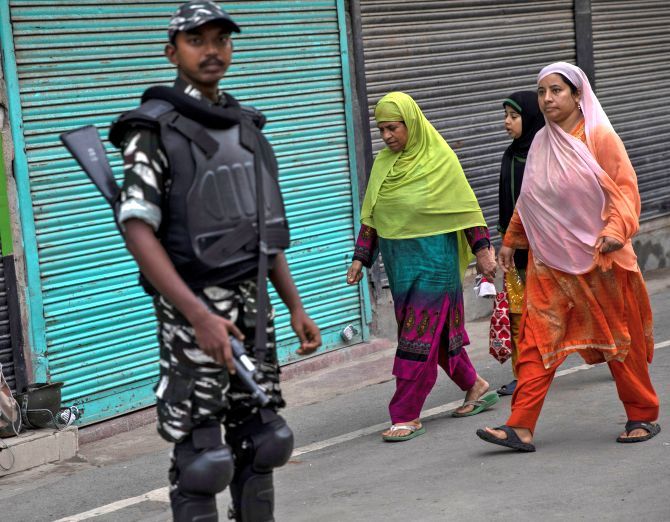 IMAGE: Kashmiri women walk past a security person during restrictions in Srinagar after the scrapping of the special constitutional status for Kashmir. Photograph: Danish Siddiqui/Reuters

Many ‘liberals’ and most Pakistanis have been disappointed by the world's reaction to the Indian action of ending the special status for Jammu and Kashmir. The phrase, Hamam mein sab nange hain (everybody is naked in the bathroom), fits aptly in this connection.

The Turks have their Kurdish separatists, Russia has its Chechnya, Philippines rebels in Mindanao, in Indonesia there is rebellion in Aachen, and Syria and Yemen have their own separatists. Pakistan has been battling the Baloch rebels for generations and its ‘iron brother’ China has put an iron curtain around the Muslim separatists in Xinjiang and is currently battling pro-democracy protests in Hong Kong!

After its experience in former Yugoslavia, the world has little appetite for secessionism, especially when the separatists are aligned with extremist ideologies of Al Qaeda or the Islamic State.

I have been involved in Kashmir for the last 28 years and one has seen doom and gloom scenarios very often.

The 1990 ethnic cleansing of Hindus from the Valley, the assassination of Mirwaiz-e-Kashmir Maulvi Muhammad Farooq Shah, the Hazratbal shrine siege, the burning of Charar E Sharif shrine and the riots in the wake of death of Burhan Wani!

But by all reckoning, the current one could be the ‘mother of all crises’ with the possible exception of the 1964 Hazratbal crisis when the Valley had erupted over the rumours of missing Hazratbal!

In September 1991, I was at Sangrama, on the outskirts of Srinagar, with Brigadier Kanwal as a village cordon and search operation was in progress. I was in my new ‘avatar’ as a columnist for the Sunday Observer. As is the practice in such operations, all the villagers were concentrated in an open area while the troops searched for militants hiding in the village. I took the opportunity to talk to the villagers. The school teacher was forthcoming in his views and claimed that all they wanted was ‘aazadi’.

I recall to this day that conversation as the substantive issues which bedeviled Kashmir are still with us. I asked the Kashmiri what he meant by aazadi -- freedom to practise faith, freedom of movement, freedom of expression and freedom of livelihood. I also asked if he lacked any of these freedoms in India. The answer to this was that Kashmiris want freedom from army presence. I agreed that operations like cordon and search are indeed irksome.

But my counter was that for the last nearly 50 years the army was confined to the border and never operated in the interiors. The army only came in when armed militants came in and were given shelter. To this there was really no answer. In a typical ‘chicken or egg, which came first’ question, it is indeed the rise of violent militancy that began in 1988 that has led to the spiral of violence in the valley.

Of course, much water has flowed down the Jhelum over the years. The demand now is 'Kashmir banega Pakistan' and the demand for rule by Sharia!

The reality is that the changes brought about in Article 370 are more cosmetic rather than substantive. The special status was eroded much earlier. What current changes have done is that the ‘symbols’ of autonomy have been done away with and more importantly, psychologically India has sent a clear message that Kashmir is an integral part of India, not just de facto but de jure as well, and that status is not going to change for ever.

This has put an end to the last glimmer of hope in the minds of Kashmiris and Pakistanis.

The reaction in Pakistan is hypocritical as that country changed the status of Gilgit  and Hunza, the so-called Northern Territories, unilaterally in 1970. Again in 2009, it changed the political set-up there and granted some form of local councils, etc. It is astonishing that even the Indian ‘scholars’ who oppose the current measures have forgotten to point this out.

There is much talk of ‘fascism’ and ethnic cleansing. This really takes the cake since the only major demographic change that Kashmir saw was in 1989-90 when over 200,000 Kashmiri Hindu citizens were forced out of their ancestral homes and had to flee. Even today, after 29 years, these people are living as internal refugees in India.

The Pakistani reaction as well as of separatists to ‘unilateral changes’ in J&K is born out of the realisation that India has finally shut the door, de jure and de facto, on any possibility of change in the territorial status of J&K.

Logically speaking, the re-organisation of J&K follows what happened in the rest of the country in the 1960s when the old British India and princely states were reorganised on the basis of language. Creation of linguistic provinces has been one of the best things that has happened to India as that gave vent to regional aspirations and allowed people to preserve their local culture and heritage.

Separation of Ladakh from J&K was a much needed measure as that region had suffered neglect for the last 70 years thanks to the regional hegemony of the Kashmir Valley over the entire state. The protests against the revocation of Article 370 are mostly confined to Srinagar Valley.

The central problem for India is that Kashmiris refuse to accept that they are Indians. The near 70 years of brainwashing has produced a mindset that completely negates the history of Kashmir. Its Sufi culture of moderate Islam has been superseded by hard line Wahhabi Islam.

To a large extent this was more due to the worldwide rise of Islamophobia that saw its reaction in the Valley. Rise of hardline Hindutva politics in North India in the 1990s added to this. In this atmosphere, Pakistan has successfully sold the idea ‘Islam khatre mein (Islam in danger)’ to the valley's population.

Armed forces and the police can only ensure that violence is kept under control but for any kind of lasting peace, politicians will have to find an answer to the perception that the Indian State is anti-Islam. Therein lies the biggest challenge to the Modi government. Long term peace is essential if the biggest Kashmir industry, tourism, is to prosper.

Having ended the uncertainty over the status of J&K, it is time the Indian government gives legitimate concessions to J&K under the Indian Constitution. The late prime minister PV Narasimha Rao had often spoken about ‘sky is the limit for autonomy for J&K within the ambit of Indian Constitution’.

There is no reason why we cannot walk the talk and unilaterally take measures like enforcing 15 years domicile requirement for buying property etc, to assuage the fears of demographic changes as a starter. The kind of protection available to the Nagas or Himachalis should be available to the Kashmiris as well.

In short, restore the safeguards of Article 370 but under the Indian Constitution, exception over dual citizenship and Ranbir Code.