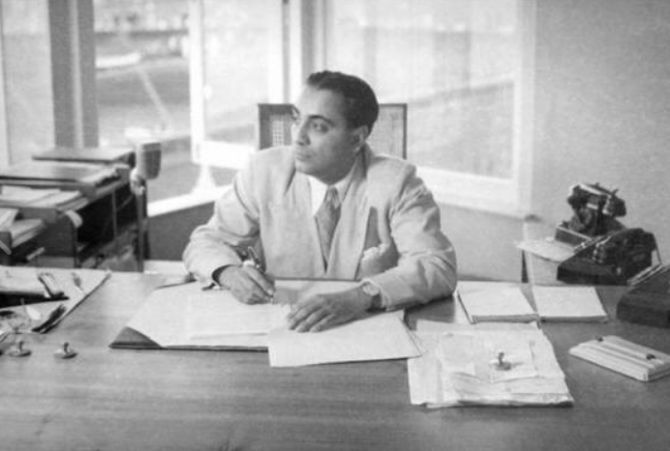 'There are already oral contraceptives known, but they are relatively expensive and required to be used systematically and precisely.... The problem of getting every villager in over 600 thousand villages in India to use them systematically would be quite enormous.'

'If on the other hand, some substance could be developed which when mixed with an ingredient of one's daily diet such as rice, grain, or salt would have the effect of reducing the chance of conception by 30%, the problem would be immediately solved. I have no doubt there are many who will hold up their hand in horror at this suggestion.'

One may think Khushwant Singh or some demographer made these suggestions. Actually, Dr Homi J Bhabha, the architect of nuclear India, made this suggestion when he opened the first session of the sixth International Conference on Planned Parenthood on February 15, 1959.

Dr Bhabha sent a copy of this speech to his mentor Jawaharlal Nehru as was his normal practice. The close interaction of the first PM with such brilliant minds immensely benefitted the nation.

On October 30 this year, when the nation celebrates Dr Bhabha's 110th birth anniversary, it is, as usual, a time for annual stocktaking for the officers and staff of the department of atomic energy and its allied units. Probably, no currently serving official in DAE may have seen Dr Bhabha in action.

I saw him closely for the first time in July 1964. He was the chief guest at the graduation ceremony of the seventh batch of trainees of the Atomic Energy Establishment Trombay Training School. AEET was the precursor to the Bhabha Atomic Research Centre.

That day was rather warm and sultry. A senior scientist tried hard to arrest an old swivelling pedestal fan so that Dr Bhabha who was on the stage would feel comfortable. The fan did not cooperate. It made a rattling sound. We were amused. Dr Bhabha showed visible consternation and waved his admirer off.

I saw him briefly on a few other occasions. Once I saw him getting out of his car and admonishing a person who was nonchalantly walking over a well-groomed lawn. I could not hear what he said. Obviously, the unseemly behaviour irritated him immensely.

The last time I saw him was at a meeting held in Trombay to condole then prime minister Lal Bahadur Shastri's premature death. There was something very poignant about the meeting, which the department held on the afternoon of January 21, 1966.

When the meeting was over, Dr Bhabha heard the sad news of the suicide of Shri Devgun, a young scientist in the technical physics division. He was a year senior to me in the training school. Dr Bhabha went to the hospital and spent lot of time there. He postponed his journey to Geneva. He flew on January 24, 1966, on Kanchenjunga, an Air India plane, which crashed on Mount Blanc while on its way to Geneva.

I felt very uneasy about that air crash. A few days earlier to that fateful day, my friend Seetharaman, who was a flight engineer with Air India, took me to the aircraft and explained to me its safety features including the mandatory technical and administrative procedures in place to ensure safety!

I had no occasion to interact with Dr Bhabha. Some of my friends had. During the early years, if any officer resigned, Dr Bhabha interviewed him at length to find out the reasons.

In July 1959, Dr Bhabha spent two days in Cambridge in connection with conferment of an honorary degree of doctor of science on him.

'This was evidently a particularly good year for roses. I have never seen such profusion of beautiful roses, as was to be found in his garden at the back adjoining the river. The two days in Cambridge, although very hectic, were most refreshing...'

'I hope some of the scientific laboratories and establishments we are building today will have a beauty of their own, which will have its due effect on those who work there. I think both Trombay and the Tata Institute of Fundamental Research will be architecturally, and botanically beautiful when they are completed,' he wrote to Nehru.

Every pillar, every brick in the laboratories, every blade of grass in the lush green undulating landscape at Trombay, has a story to tell.

Dr Bhabha's contribution to Trombay as a lover of trees, gardens, and flowers is legendary.

Chintamani Deshmukh, in his eminently readable biography of Dr Bhabha, traced the latter's family background, which instilled in him the love of trees, flowers, and gardens right from his childhood.

Dr Bhabha could not tolerate cutting down trees as an inevitable fallout of development. Deshmukh revealed that he went out of his way to save trees, even going to the extent of changing plans. He transplanted many full-grown peepuls, banyan and Barringtonia trees where the new buildings were to come up. Expenses did not deter him.

'In AEET, the road alignment was changed to save a 100-year-old mango tree. In the new TIFR campus, a rain tree stood in the way of the approach road. It was not possible to change the road alignment, so the tree was transplanted elsewhere on the campus,' Deshmukh observed.

In the words of Vaidya, 'His sensitive mind perceived the trees as living sculptures, giving a character of their own to the place where they stood ungrudgingly for generations.'

Vaidya disclosed to Deshmukh that Dr Bhabha gave top priority to the afforestation programme -- planting over 15 lakh trees to cover all the barren portions of the hill, completed on a task force basis, even before the erection of the main laboratories.

Some criticised him for giving priority to aesthetics. Dr Bhabha replied that trees take their own time to grow, whereas laboratory construction can be accelerated artificially.

'It was believed impossible to grow roses in Mumbai. However, with Bhabha's initiative, AEET started to grow roses and in 1960, there were as many as 750 named varieties growing successfully in the Rose Garden. No wonder Bhabha played a prominent role in the Citizens Committee for Beautiful Bombay,' Deshmukh quoted Vaidya.

The correspondence between Nehru and Dr Bhabha illustrates Dr Bhabha's contributions in many fields including atomic energy. These include suggestions to improve the standards of universities, setting up an economic study wing in the department of atomic energy to study the economic aspects of atomic energy, the location of power reactors etc and setting up a scientific advisory committee to the Cabinet to advise the latter on the formulation and implementation of the government's scientific policy and related matters.

Dr Bhabha succeeded in avoiding turf wars with the deeply entrenched bureaucracy because of the timely support he received from Nehru.

The bureaucracy also rose to the occasion and developed an admirably proactive attitude in tweaking the system to ensure that the nascent atomic energy technology does not suffer from 'non-essential restrictions or needlessly inelastic rules'.