'He is 47 years old and not married. Since his son or daughter can contest for Parliament only 25 years after being born, the earliest, if he marries in December, would be 2043.'
'So this, pretty much, is the end of the road for dynastic rule in the party,' says T C A Srinivasa-Raghavan. 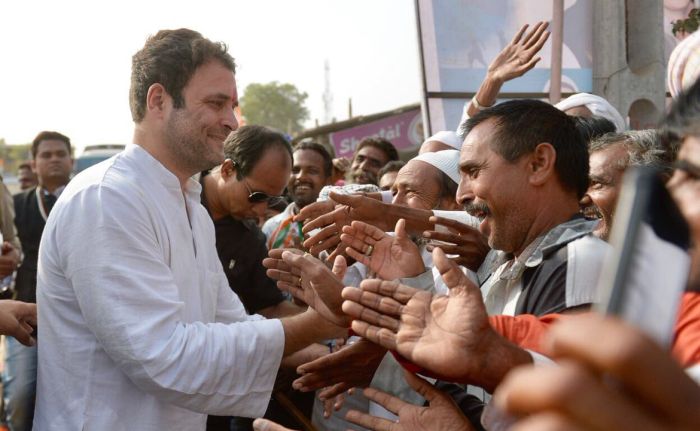 Arun Shourie once wrote that Indian politics needed totems around which the natives could gather, perchance to dance and feast.

He was referring to the Congress party's perennial need for a Mohandas Gandhi, Jawaharlal Nehru, Indira Gandhi, Sonia Gandhi, and now Rahul Gandhi.

He could have talked about MGR, NTR, Jayalalithaa, Mamata Banerjee, Mayawati, etc. The political parties they led or lead are almost exactly like the Congress in their need for totems. None of them, however, has started political dynasties.

What Mr Shourie did not mention was that this totem approach also involves a strong element of Confucianism, wherein unquestioning obedience to the head of the family is a necessary, if not sufficient, condition for survival and advancement. The Americans, precise as ever, call it brown-nosing.

But Confucian family succession is by merit. Just look at that fellow Xi Jinping. It emerges after a Mughal/Mafia/CPC style free-for-all.

In the Congress Mummy anoints the heir and no one is allowed to argue, protest, or contest.

So Indira Gandhi chose her younger son, Sanjay, as her successor.

Jawaharlal Nehru, being the good man that he was, would surely have had his doubts about both of them.

In between Sanjay and Rahul lies -- or lay -- Rajiv Gandhi, a very nice guy among bad ones.

Had Sanjay not died an accidental death in 1980, Rajiv may well have retired as CMD of Indian Airlines/Air India at the age of 60.

It is now received wisdom that the Congress cannot survive without the Gandhis. The events since 1998 certainly suggest that.

But had Indira Gandhi not been killed when she was, that story could have turned out very differently. Sonia Gandhi would probably have ensured that.

She almost did in 1984, when she is said to have pleaded with Rajiv not to become PM. She even turned down the offer to make her Congress president the day after her husband died and stayed away from active politics for seven long years after her bereavement.

It was the intense rivalry in the Congress party that made her, first, the neutral umpire, and, then, the on-field umpire because useless old men in the party could not bring themselves to accept a different leader.

In fact, in 1984 Pranab Mukherjee could not even stomach Rajiv Gandhi as PM and was soon expelled. He formed a party that no one joined and quickly returned to the fold.

In the mid-1990s, Arjun Singh and N D Tiwari left the Congress and formed a party because they could not stand the idea of a south Indian as Congress PM. That venture, too, was abandoned when Sonia Gandhi became the leader in 1998.

Other Congress people left the party to join the BJP. Some succeeded, others didn't.

With disintegration looming, the older Congress 'leaders' did what K Kamaraj, S K Patil, and Atulya Ghosh had done in 1966: They turned to the Gandhi family in the hope that they too would have a totem.

But again someone objected. Sharad Pawar formed his own party, which still exists.

People, meanwhile, do wonder about Rahul's successor. He is 47 years old and not married.

Since his son or daughter can contest for Parliament only 25 years after being born, the earliest, if he marries in December, would be 2043.

You can work out the odds for the Congress party's hereditary tradition from this. They don't look too good.

So this, pretty much, is the end of the road for dynastic rule in the party.

That is why, for Rahul to lay claim to true greatness via a massive sacrifice for a greater cause, there is only the Edward VIII option left. That King of England abdicated his throne in 1936 for love.

So if Rahul loves the party and wants it to survive -- which it absolutely must -- he must quit after five years, regardless of such meagre electoral successes that come his way and let the party find a new leader.

It will be a painful process, but the party will live on.

His mother came out of retirement to save the party; he must go into it for the same reason.