The economics and pricing of the Covishield vaccines and the government's own decision to pay higher prices raise more than a few questions, observes Prosenjit Datta. 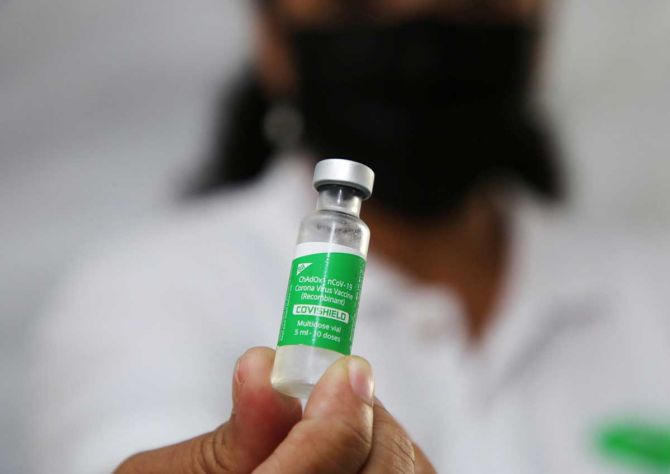 IMAGE: A health worker holds a vial with doses of the Oxford-AstraZeneca vaccine, marketed by the Serum Institute of India as Covishield. Photograph: Ranu Abhelakh/Reuters

Serum Institute of India's announcement of the Covishield prices it will charge the Union government, the states and, finally to the private hospitals raises several disquieting questions.

According to a clarification released by SII, it was charging the Union government around Rs 150 per dose for its vaccine.

It will expand its vaccine production capacity, reserve about 50% of this for the Union government and then sell the rest to states and private hospitals.

The Union government will presumably continue supplying government hospitals and also give some amount of vaccines to the states, as it has been doing so far.

Any excess requirement of any state will need to be purchased from SII from the state's budgets. Or at least that seems to be how it will work. (Not all details are out at the time of writing this article).

The question here is: Why should the price shoot up if volumes are actually going up.

Traditional manufacturing theories of economies of scale show that if large volumes are produced, it costs less per unit than if the manufacturer were to produce in smaller capacities. So it is hard to understand why price for even the government will shoot up from Rs 150 to Rs 400 when volumes go up.

More importantly, what are the new prices based on? The Oxford/AstraZeneca vaccine sells for between $2 and $4 dollars in the US, the UK and the EU.

Covishield is the same vaccine produced under license by SII.

AstraZeneca has signed a not for profit pledge for the first 400 million or 500 million doses. So one can safely assume that it costs AstraZeneca a little less than $2 and $4 in its different production lines in different geographies.

AstraZeneca's license to SII said the latter would also supply the vaccine to 91 poorer countries. One reason for this could be that SII, as the world's biggest vaccine producer, could manufacture the vaccine at a lower cost than its own production facilities in the developed counties. IMAGE: An employee removes vials of Covishield inside a lab at the Serum Institute of India in Pune. Photograph: Francis Mascarenhas/Reuters

In one interview, Mr Adar Poonawalla was quoted as saying that he was not selling at a loss to the Indian government but that the profit margins did not allow him to invest in huge capacities. He wanted a grant of around Rs 3,000 crore (Rs 30 billion).

The government has not given in to that demand though it has offered him an advance of the same amount to be set off against future orders, for expanding his capacities.

So a sharp jump in Covishield prices from Rs 150 to Rs 400 even for the government orders seems more than a bit surprising.

The other issue is the question of emergency use authorisation that Covishield has got so far from the Drugs Controller General of India. This approval allows it to only sell to the government.

To be able to sell to the private hospitals, it needs a general marketing approval for the vaccine -- whether it has been promised this is not yet clear.

All businessmen work to make profits and no one grudges Mr Poonawalla making money for his hard work. But it is still hard to understand why the price will more than double when production capacities are actually going up and economies of scale should make the cost of production cheaper.

Even more difficult is understanding the Union government's thinking on the vaccine pricing matter.

In most countries around the world, the government is buying vaccines directly from the firms and giving them free to the citizens.

India is not a rich country and it has a big population. But the arithmetic still does not add up.

In her Budget presentation, Finance Minister Nirmala Sitharaman had allocated Rs 35,000 crore (Rs 350 billion) for vaccination -- and said that more could be released if needed.

Thus the Union Budget allocation could have pretty well covered the vaccination expenses of the whole country provided the government paid SII even Rs 200 a dose, instead of the Rs 150 it is doing now, and allows Mr Poonawalla to make a little more profit than he was doing earlier.

That is why the economics and pricing of the Covishield vaccines and the government's own decision to pay higher prices raise more than a few questions.