While critics and protestors have multifarious arguments to offer, the defence of CAA has been uni-dimensional and uni-focussed as has been the case with most policies of the Modi government and the political positions of his party.

But to be drawn into an issue that has assumed more than local and national dimensions, Rajini has knowingly or otherwise, taken the plunge and in favour of the BJP -- or, so it has come to be seen, says N Sathiya Moorthy. 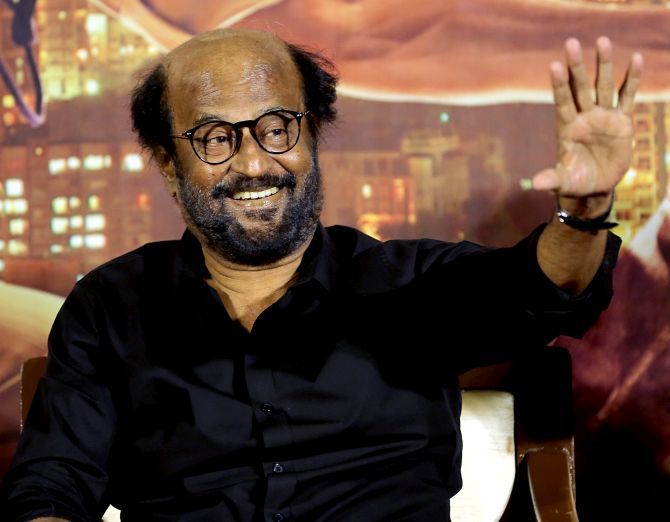 By taking a firm position on the controversial Citizenship (Amendment) Act and related issues, Tamil cinema’s superstar Rajinikanth make have taken the promised political plunge, but not necessarily independent of the ruing Bharatiya Janata Party at the Centre.

Barring the declaration that he would be the first one to come out in support of ‘Indian Muslims’ if denied their rights under the CAA, his defence of the actions of the Centre also reflects the public positions taken by Prime Minister Narendra Modi and other BJP leaders at the national and state levels.

It could not have been otherwise.

While critics and protestors have multifarious arguments to offer, the defence of CAA has been uni-dimensional and uni-focussed as has been the case with most policies of the Modi government and the political positions of his party.

But to be drawn into an issue that has assumed more than local and national dimensions, Rajini has knowingly or otherwise, taken the plunge and in favour of the BJP -- or, so it has come to be seen.

Nothing explains this perception than the immediate reaction to the same, from the anti-BJP Congress and the Opposition Dravida Munnetra Kazhagam ally in Tamil Nadu. Their communist, Muslim and Dalit political allies, existing or intending, too have not spared Rajini.

Some of them have claimed that with this one, too, Rajini has clearly identified himself with the ‘communal BJP’ more than at any time in the past. The implication is that he will face the kind of political criticism reserved for the BJP.

It is not known why Rajini should choose to comment on the controversial CAA after maintaining a stoic silence for over a month now. But his posturing has sent out confusing signals to the ruling All India Anna DMK in the state, an ally of the BJP in last year’s Lok Sabha polls in which their alliance in the company of PMK, DMDK and others was all but wiped out.

State BJP leaders claim that with this one statement and episode, Rajini has crossed the Rubicon as far as a BJP alliance for next year’s assembly polls go.

However, they too are unsure if he would really take the promised political plunge or would walk out on them, as in the past (minus his public commitment of the 2017 New Year Eve kind). That was when he told his fans at a special Chennai function that he would enter direct politics for the assembly polls -- indicating that they should all wait until then, without either pressuring him or pledging their loyalties elsewhere.

It is this unsure character of Rajini’s public posturing that has disturbed the AIADMK in particular. The party feels uncomfortable about aligning with the BJP for the all-important assembly polls, first after the LS election results and now after the CAA, NRC and allied legislations and procedures.

The AIADMK is now commencing a district-level review of the party’s preparedness for the assembly polls, after its none-too-impressive performance in what could be described as the first phase of rural local bodies polls, that too in the aftermath of a near-complete rout in the LS elections.

The party is still tentative about the final tally at the end of the completion of the local bodies elections, where urban municipal corporations and councils, too, are yet to go to the polls.

In the context of the assembly polls, the AIADMK faces two issues vis-a-vis Rajinikanth entering electoral politics and joining the alliance in the company of the BJP.

After the twin results of LS and rural local bodies elections, AIADMK cadres are convinced that their poor performance owed to joining hands with the ‘communal BJP’. In their reckoning, the BJP has no votes to offer the alliance other than the ‘committed Hindutva’ votes from the past.

The AIADMK second-line also cites their own LS poll sweep of 2014 when the late chief minister Jayalalithaa’s ‘Lady vs Modi’ magic worked wonders, also against the traditional, Dravidian, DMK rival.

On the one hand, the AIADMK seems to be weighing its options, especially the electoral advantage vis a vis the BJP alliance, with or without Rajini in the camp. They need to evaluate if the BJP alliance, without Rajini, can now more than offset the loss of traditional ‘minority’ and non-committed Dravidian / voters, to be able to provide an electoral edge against the DMK-Congress rivals.

More importantly, the EPS-OPS twin leadership cannot be seen as trading off the chief minister’s position to Rajini, for instance, without which the super-star is not seen as being able to provide a non-Dravidian alternative to the ‘Dravidian mess’ that the BJP and other Modi followers say the state has slipped into over the past 50-plus years of alternating DMK/AIADMK rule.

They would want Rajini to be in their camp, campaigning for the alliance, not substituting the AIADMK leadership of the combine, before and after the polls -- whichever way the results turn out to be.

Opinion is also divided among veteran observers if Rajini straying from his commitment to ‘spiritual politics’ and ‘corruption-free’ Tamil Nadu, to comment on controversial issues like CAA now and the ‘Thoothukudi police firing’ in southern Tamil Nadu.

In the latter case, the superstar first condemned the police firing that claimed 13 lives in the Sterlite-linked protests in the southern Tamil Nadu port town, and followed it up with a condemnation of the protests only hours later. Such protests (where industrialisation suffered, and jobs and family incomes were lost) could turn Tamil Nadu into a ‘graveyard’ (‘sudukadu’, or cremation ground, in Tamil).

Meaner critics of the superstar refer to Rajinikanth’s reaction after the ‘Coimbatore serial blasts’ of February 14, 1998, only weeks before the LS polls that year. As they point out, Rajinikanth has moved away from supporting the ruling DMK of the time in the state, when the BJP was led by the Vajpayee-Advani duo, to identifying with the party now under the twin leadership of PM Modi and BJP boss and Union home minister, Amit Shah. They recall how Advani was also the intended victim of the blasts that claimed at least 59 lives.

In the context of Rajini’s turn-around reactions on the Thoothukudi firing, they recall how in 1998 Rajini, just returning from a foreign trip, sought to distance the ruling DMK from the blast perpetrators. It was a factually right position at the point, or even later, but the public mood, starting with that of his hardcore fan following, was in no mood to accept \. He later made amends, which were feeble and ineffective -- but only after fans pulled down his cut-outs and shut down fan associations across the state.

What has made the current situation embarrassing for pro-Rajni followers from among the re-swelling ranks of non-committed voters is the timing of his pro-CAA pronouncements.

Only a week earlier the local media had reported how the income tax authorities had withdrawn an appeal in the Madras high court, challenging the ruling of an appellate tribunal that cleared the superstar of wrongdoing in the past, dating back to 2004-05.

Unaware of the nuances of tax procedures and the like, they are unsure why the appeal was filed by the department first, and withdrawn later. Some in the social media circuit also see political linkages where none might at all exist.

As further coincidence would have it, the withdrawal of the tax case against Rajini, followed days later by his pro-CAA comments, the IT authorities raided the current generation’s box office sensation, Vijay. In doing so, the IT authorities picked up Vijay from the site in the lignite town of Neyveli, where he was shooting for his next big-budget extravaganza Master, due for release later this year.  Social media pictures of tax authorities sitting on either side of the actor in the backseat of a car, as if he were a common criminal, too has not gone down well with the masses, though it is what the procedures might demand.

An accompanying highlight of the week was the simultaneous protests by Rajini’s distributors for his Pongal release Darbar. The trilingual (Tamil, Telugu and Hindi) film had too much of vintage Rajini of the ’80s and the ’90s, and less and less of ace director A R Murugadoss, who was expected to give the superstar a much-needed box-office break after a series of less-than-impressive movies in two or three years. The film-maker has since moved the Madras high court seeking personal protection after a group claiming to be Darbar distributors created a ruckus in his office.

The distributors were known to have become restive after the film’s poor show, despite 10 clear days of Pongal festive season -- and no competition of any kind, big or small, in sight almost from the start. They claimed to have tried meeting him at his Poes Garden residence in Chennai, but were turned down by the cops on security duty.

The police were there after what critics dubbed as a controversial Rajini statement on ‘Dravidian ideologue’ Periyar E V Ramaswami at the golden jubilee celebrations of the Tamil political satire magazine Thuglak, founded by late Cho S Ramaswamy and edited by RSS ideologue S Gurumurthy.

The Darbar distributors now want Rajinikanth to compensate them for their losses as he had done after the box office bombing of two of his earlier (home) productions, Baba (2002) and Kochchadaiyan (2014). They have since threatened to go on an indefinite fast if they do not get to meet the superstar, who is already shooting for his next film -- as after a long gap, he has been releasing at least one, if not two movies a year, as against one in three or four years for over two decades.

What however is unacceptable are the stray posts by purported Vijay fans, linking the tax raids to his being acknowledged as Tamil cinema’s reigning box-office superstar and the relative poor showing of a succession of Rajini movies, with Darbar being only the latest.

Ironically, the pro-BJP social media groups, who like state BJP leaders, are the first ones to defend the superstar’s political statements even when none is required, were among the first ones to go to town on the tax raids on Vijay. Their unproven allegations apart, their repeated use of the actor’s full name as ‘Joseph Vijay’, underscoring his Christian background, has added a communal angle where none otherwise exists.