'In UP, the CM actually announced that his administration would 'take revenge' against rioters.'
'That must have been music to his police force's ears for it substantiated what the police always do: Take revenge on an entire community for the violence of a few,' points out Jyoti Punwani. 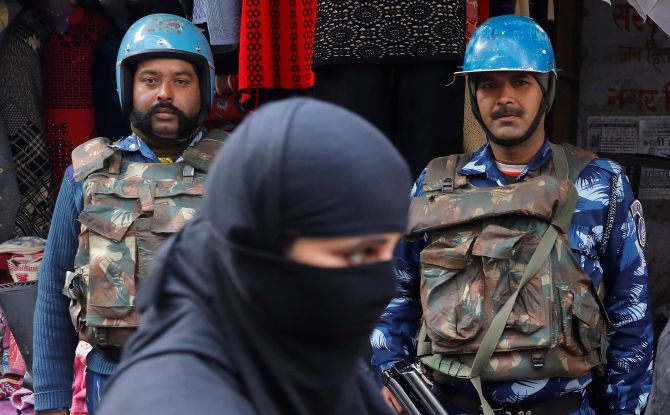 In India, the wheel is reinvented every few years. Right now, a new generation from UP to Mangaluru is discovering for themselves just how much the police are prejudiced against the country's largest minority.

But they have been like that for at least half a century.

Right from 1970, judicial commissions investigating riots from Bhiwandi (Maharashtra) to Tellicherry (Kerala) to Delhi to Mumbai have documented the police's anti-Muslim prejudice.

Neither regional divides nor the passage of time work when it comes to this aspect of police behaviour. The very acts that have evoked the most horror over the last ten days were witnessed in Mumbai a quarter century earlier.

'Khaata hai Hindustan ka, gaata hai Pakistan ka' is what they told Shamshad, the young manager of the Suleman Usman Bakery, before shooting him point-blank, an eye-witness testified before the Srikrishna Commission. Eight unarmed Muslims were shot dead during that raid.

'Muslim ke bas do hi sthaan, Pakistan ya Kabrastan' was a slogan raised by Hindutva mobs in the Mumbai riots; last week, the UP police said these same words to an elderly Muslim.

The one thing the Mumbai police didn't do that the UP-Bihar police have done, was vandalise the homes of Muslims, leaving that job to Shiv Sainiks. But while they gave the Shiv Sainiks a free hand, when the latter attacked them, the police didn't hesitate to turn their guns on them.

Even more than rioting, what enrages the police is an attack on them. In Mumbai, three of their men were killed by Muslims on December 7, 1992, and they avenged their deaths on the entire community over the next week. In January 1993, a Muslim policeman was killed by Hindus on his way home; his death went unavenged.

Is it difficult then to understand the police's fury in UP? Let's not forget how they perceive Muslims.

At least three studies have documented police perception of Muslims: Senior bureaucrat N C Saxena's study in 1983; IPS officer V N Rai's study in 2008; and Common Cause and Lokniti-Centre for the Study of Developing Societies' study in 2019.

Add to these the testimonies by senior and junior police officers before the Srikrishna Commission, and we have enough evidence that police across the country perceive Muslims as aggressive fanatics, criminals, and Pakistan-loving traitors, in contrast to Hindus who are seen as peace loving, law-abiding loyal citizens. 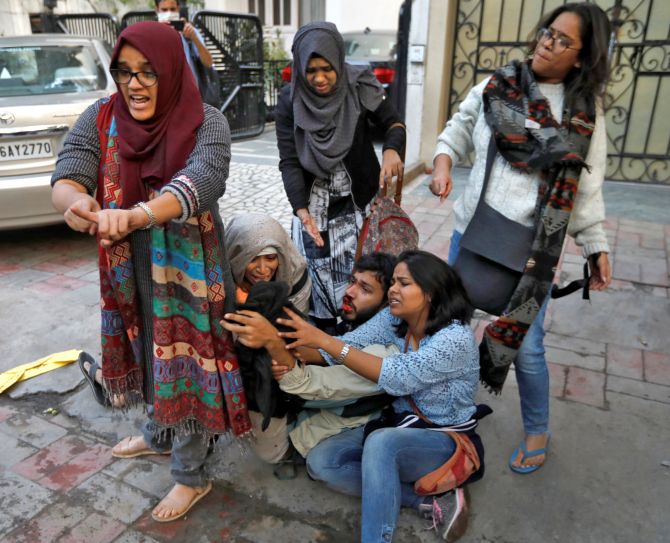 The Mumbai police commissioner during the 1992-1993 riots, Sreekant Bapat, told the Srikrishna Commission that it was an 'ISI hand' that had pushed the 'leaderless Muslim mobs' protesting on the streets against the demolition of the Babri Masjid, even if they themselves weren't aware of it.

Bapat said he didn't think L K Advani's 1990 rath yatra was the cause of the riots that erupted as it travelled from Gujarat to Ayodhya, exhorting Hindus to demolish the Babri Masjid. Communal tension was generated only because of opposition to the yatra by Muslims gathering on its route, said Bapat.

This is the mindset that reacts to the sight of Muslims burning public property and worse, stoning the police. We must not forget that.

When faced with violent protesters, the police is expected to disperse them, even firing on them as a last resort, but to wound, not kill. It is only in self-defence that police can fire to kill.

But when have our cops ever followed the rules when it comes to crowd control? And when have they been held accountable for not doing so?

Which policeman was punished? 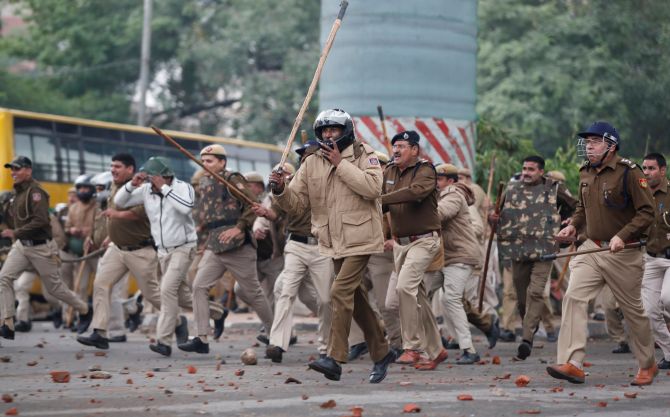 It took decades to book the cops guilty of the Hashimpura massacre of unarmed Muslims (1987) and the Abohar (Punjab) firing on unarmed workers (1991). Cops charged with murder of unarmed Muslims in the Mumbai riots have yet to be punished.

In some of these massacres, the protesters turned violent only when resisting the police's arbitrary decision to stop them from demonstrating, and even then, all they used were missiles found on the roads, stones and bricks.

That's exactly what's happening in BJP-ruled states today. The UP police have alleged they were fired upon, but have not presented any instance of a cop injured in firing.

"Can a stone be answered with a bullet?" a grieving father had asked me after his son's death in police firing on Muslims protesting Salman Rushdie's Satanic Verses in 1989 in Mumbai. The firing claimed 12 lives.

The answer to his question can only be provided by those under whom the police function. But no government has thought it fit to rein in the police -- except when doing so suits it.

Consider the police's uncharacteristically cooperative attitude towards the anti-CAA/NRC protest in Mumbai on December 19. The protesters: Mostly Muslims, students, progressives, are not the police's favourites. Yet, though no march was allowed, the police diverted traffic and allowed protesters to occupy the road leading to the protest venue. The atmosphere was almost mela-like.

Obviously, the police were following the orders of the new Shiv Sena-NCP-Congress government which stands to gain from public opposition to the BJP.

There have been other occasions when our normally trigger-happy cops have exercised restraint. Then, it's been the character of the crowd that has determined the police's conduct: Hindutva mobs (Mumbai, Gujarat, Ayodhya); those who belong to the ruling party (delegates to the NSUI convention, Nagpur, 1984, anti-Sikh pogrom, Delhi, 1984); or, those belonging to dominant castes.

Between 2010 and 2012, hundreds of Gujjars of Rajasthan and Jats of Haryana blocked railway lines for two to three weeks, disrupting long distance rail traffic. But the police were so restrained that only one Jat died in police firing.

In all these cases but one, the police were taking the cue from their political masters. But when it came to Shiv Sainiks, the Mumbai police both in the 1984 and 1992-1993 riots, followed their hearts and ignored orders from their commissioners to arrest them. 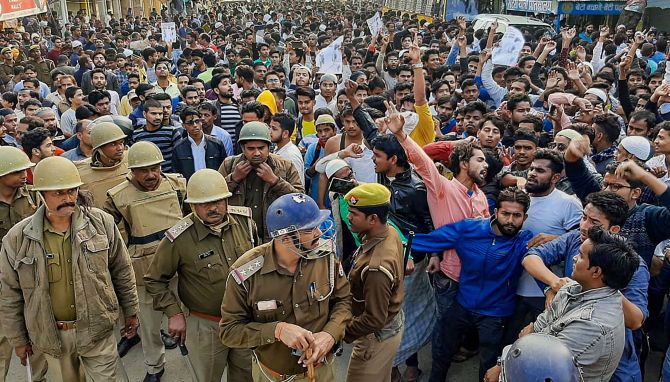 IMAGE: The police keep a watch as Muslims protest against the Citizenship (Amendment) Act in Mau. Photograph: PTI Photo

Chief ministers who have made it clear that the police must act tough with communal rioters can be counted on the fingers: Mulayam Singh Yadav, Lalu Prasad Yadav, Jyoti Basu, and ironically, the Sena's Manohar Joshi, himself named in the Srikrishna Commission report.

So should the police's conduct today towards the anti-CAA/NRC protesters in BJP-ruled states surprise us? Here, the police's deep-rooted anti-Muslim prejudices find validation in the ruling party, making a violent response to Muslim protests inevitable.

In UP, the CM actually announced that his administration would 'take revenge' against rioters. That must have been music to his police force's ears, for it substantiated what the police always do: Take revenge on an entire community for the violence of a few.

Only once has a police officer gone against this pattern. Ironically, this happened in Mumbai, where Muslims have had bitter experience of police firings. 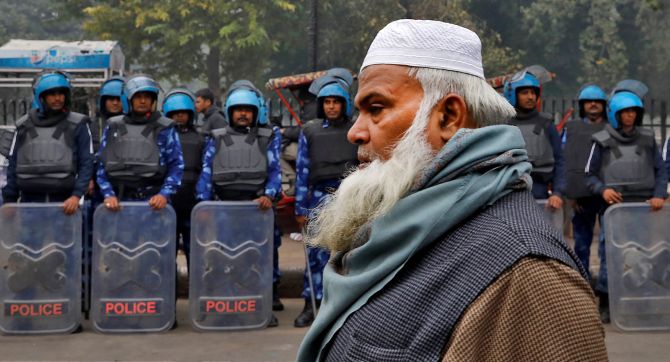 In 2012, then Mumbai police commissioner Arup Patnaik persuaded a massive rally of angry Muslims to disperse peacefully after a section of it attacked his men and the media without any provocation. Two rioters were killed in police firing, but Patnaik's restraint prevented a major riot.

He was made to pay for it within days, transferred to a punishment posting. The message sent by the Congress-NCP government was clear: When Muslims riot, restraint is the last thing police must exercise.

Incidentally, Justice B N Srikrishna had noted (the Srikrishna Commission report, Volume I, Chapter II) that had the Mumbai police treated the first protests by Muslims after the demolition of the Babri Masjid with tact and sensitivity, the protests would have peacefully blown over.

'The police mishandled the situation and by their aggressive posture turned the peaceful protests into violent demonstrations, during which the first targets of the anger of the mob became the municipal vans and the constabulary, both visible signs of the establishment.'

'It is significant that the mobs were not armed, not even with stones and sticks, though they were angry and wanting to vent their spleen against anyone in authority. This situation was misdiagnosed, mishandled and turned messier.'

What if the police in the BJP-ruled states had acted with tact and sensitivity with the current protesters?

But why would they, and who would force them to do so?

When we decide to protest on the streets, these are the lessons we must remember. In one sentence: Some protesters are more equal than others.