Peace and tranquility on the China border remains a distant dream

'The only choice we have is to strengthen ourselves militarily and economically and develop friendships with others without alarming our neighbours, says Ambassador T P Sreenivasan. 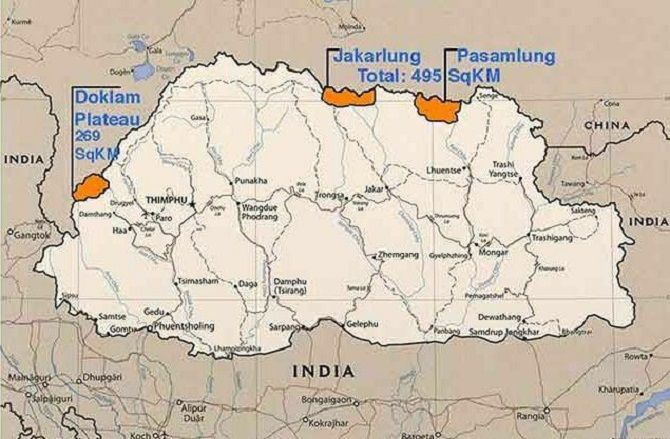 Commentators are at a loss to choose the right Shakespearean title to describe the end of the Doklam standoff.

The tempting ones are 'Measure for Measure', 'Love's Labour's Lost', 'As You Like It' and 'Comedy of Errors'.

But the most appropriate thing to say, particularly when the details of the deal are not known, is that 'All's Well That Ends Well'.

We can even go one step further and console ourselves with Robert Browning's line, 'God is in his heaven and all is right with the world.'

Of course, all is not right with the world and the threat from China will not go away.

India must be ready to deal with the Chinese menace for a long time to come.

Incidents like Doklam will continue to take place and there will be no single approach to each of them.

This time the deus ex machina was the BRICS summit, which put a time limit on the standoff.

After the Indian boycott of the BRI summit, a similar step by India on the BRICS summit was quite possible.

China's stake in BRICS is high as it is turning out to be a major political and economic instrument for it.

After Brazil and South Africa have become minor players, China needs India and Russia to carry on the show.

Knowing this fully, India made its moves cleverly and brought China to end the situation to pave the way for a trouble-free BRICS summit.

If BRICS was not around the corner, the situation would have been different.

Surprisingly, even some former Indian diplomats have challenged the basic premise of India that the Indian Army moved to Doklam at Bhutan's request on the basis of the treaty that requires India to defend Bhutanese territory.

It is difficult to imagine that India will lie on such a fundamental issue.

Such a request will not be in the public domain as of now, but it does not mean that there is not even a verbal request.

According to Mani Shankar Aiyar, the last time there was such a threat to Bhutan, Rajiv Gandhi went to Bhutan to assure the king that India would intervene if necessary.

Should we distrust the government so much to believe that the Bhutanese invitation is a cock and bull story?

Another point being raised by the pro-China lobby is that India did not respond at all when China reportedly informed India about its plans to construct a road in the area.

If China was building a road on its own territory, why should they have informed India?

Even if they had, why should India have responded without consulting Bhutan, knowing well that the area in question is disputed between Bhutan and China?

Moreover, isn't there a public statement from Bhutan that the building of the road was violative of the understanding reached that the tri-junction should be settled only at a later date?

Those who believe that they have a monopoly over all wisdom refuse to acknowledge that their successors are as good in diplomacy as them, if not better.

The theory of evolution supports the premise that mankind is becoming superior in intelligence.

Till a few days ago, the situation was that India had expressed willingness to withdraw simultaneously with China and China had insisted that there would be neither simultaneous withdrawal nor talks till India withdrew.

Such an impasse had to be resolved without loss of face and now the withdrawal has taken place, perhaps because the civilisational wisdom of both countries prevailed.

It does not matter now as to who took the first step.

Let both sides look for their own face saving devices and gloat over them.

Those who are nitpicking on the modalities seem to forget that India has accomplished its objectives.

What India wanted was the restoration of the status quo, which essentially meant China discontinuing road construction.

China has admitted that it will only patrol the region and not continue the road construction.

Nothing succeeds like success and let us not grudge the Indian side their sense of victory.

If the Chinese violate the understanding, it will be another ball game, which has to be faced.

At the same time, this is no time for celebration as some ruling party activists seem to believe.

Military and diplomatic victories are to be savoured, not proclaimed.

How some of them turned a success in anti-insurgency operations in Myanmar and the surgical strikes against terrorist camps in Pakistan into victory parades and made matters worse should be remembered.

Any celebration of victory is a blow to the other party.

Victory can turn into defeat if it is unduly celebrated.

Moreover, trust and confidence are important ingredients of successful negotiations.

In the coming years, India will face such difficult situations as long as the list of grievances on both sides grow.

The list is not shorter today than what it was in 1962.

Doklam had novel features because it was a test of India's bonds with Bhutan.

China kept claiming that Bhutan had no problem with the road it was building, but Bhutan kept its customary silence in public.

Now that we have overcome the present challenge, let us savour the moment and move on.

Peace and tranquility on the China border will remain a distant dream.

The only choice we have is to strengthen ourselves militarily and economically and develop friendships with others without alarming our neighbours.