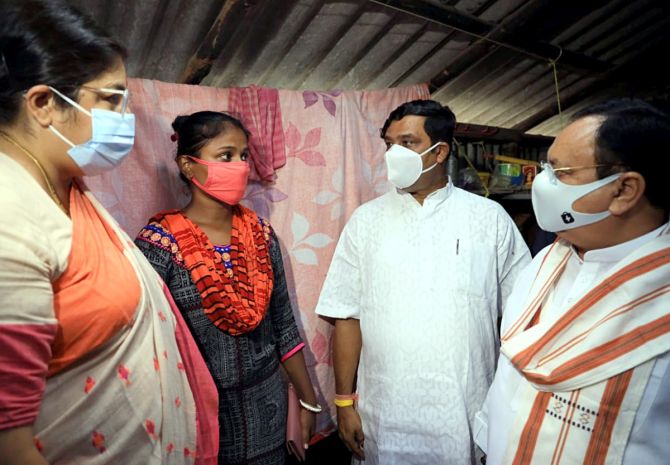 Tongues of fire leaping in the air and brutal images of blood-soaked victims assault the senses as post-verdict violence ravages several districts of West Bengal.

A day after Trinamool Congress supremo Mamata Banerjee won a landslide victory and vanquished the Bharatiya Janata Party in the assembly election, disturbing news of mayhem emerged from different corners of the state: Arambagh, Cooch Behar, South 24 Parganas, Midnapore, Bankura, Birbhum among others.

The chief minister had successfully restrained her supporters from celebrating their victory till the Covid situation was brought under control, but her appeal for peace had no impact.

Mamata Banerjee said she would take charge after she is sworn in as chief minister on Wednesday.

This raises a pertinent question. Where does the buck stop? Why would the new chief minister wait for the oath-taking ceremony to take charge? Some believe that the Election Commission is in charge in the period between the verdict and the swearing-in.

But this is clearly not the case. Law and order remain with the state even when the elections are on. Only election-related matters are within the EC's purview.

It is strange that in other areas it has been business as usual for the TMC.

On May 4, a day before Banerjee's swearing-in, the board of the Kolkata Municipal Corporation was reinstated post the TMC's victory.

How can the TMC absolve itself of the abysmal law and order situation in the districts? 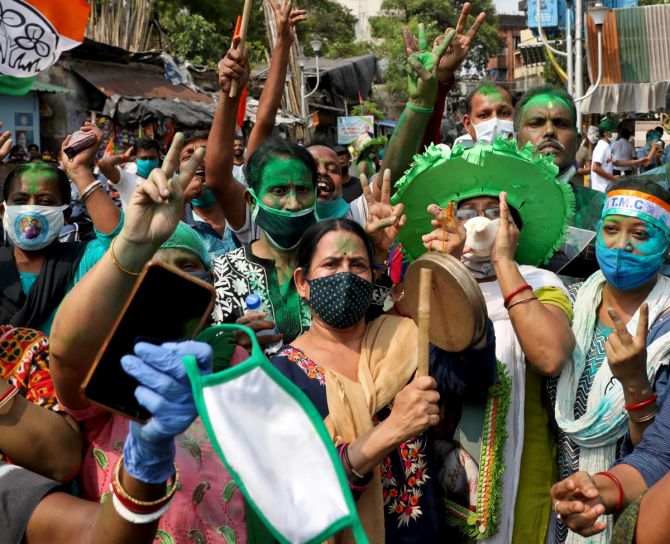 Charges and counter-charges have been hurled. The TMC and BJP continue the blame game while violent goons wreak havoc. Close to 20 deaths have been attributed to political clashes.

A senior police officer in the state confessed that the Daily Situation Report, which they receive from districts, had merely mentioned 'sporadic incidents of violence are being investigated.

There was no mention of deaths. Details of the horror were being seen in the media and social media.

Is the administration distancing itself and just looking away? Or as TMC supporters claim it is mostly 'fake news' going viral?

Unfortunately, Bengal has an unsavoury history of post-poll violence.

During the Left rule too post-verdict celebrations often degenerated into skirmishes.

"But this time the violence is of a different magnitude. Those who win indulge in shooting, looting, throwing bombs and burning houses. The Left Front did not use the State apparatus as a tool to suppress the opponent. Today, the police seems to be a mute spectator," says a retired bureaucrat.

Offices of the vanquished are burnt down to convey a menacing message. There is a fear psychosis.

There are attempts to beat opponents into submission. In the crossfire, it is innocent, hapless youth who lose their lives. Often the sole bread-winners.

While this time, the violence seems to have been given a communal overtone, this is not a phenomenon that Bengal usually witnesses.

"Instead of caste and communal violence like in many other parts of India, Bengal has 'party-centric' violence," explains political scientist Maidul Islam. "Every individual is judged on the basis of which party they vote for, support or are actively involved with the political campaign."

"This has been the trend in the last two to three decades," adds Islam. "The space of a neutral and independent civil society is shrinking with the emergence of what we refer to as a party society."

Bengal waits for normalcy to resume after the swearing-in on Wednesday morning.

Those who gave the TMC an overwhelming mandate surely believe that violence is non-negotiable and the guilty irrespective of political affiliations should be punished.