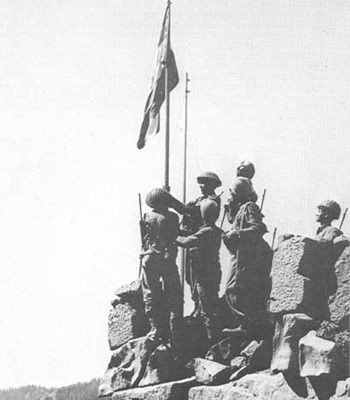 'Pakistan's recent utterances and tendency to use pinpricks to try our patience appear reminiscent of 1965. We are a strong nation, emerging stronger,' says Lieutenant General Syed Ata Hasnain (retd).

As we come closer to the end of the 22-day period of September which marks the 50th anniversary of the India-Pakistan Conflict of 1965, it can be said that the nation has been fairly well educated about how and why the conflict (hereafter called war) was fought.

The exhibition currently on at India Gate showcases some of the heroics of those who fought so well despite being ill equipped and achieved honour for their regiments, army and the nation.

What has, however, been insufficiently covered from an information angle is some of the lessons and analytical aspects beyond the usual cliched explanation of the army and air force about being poorly equipped.

The war has been largely ignored by history because within six years after 1965 followed a spectacular strategic triumph over Pakistan; the roots of that lay in the less decisive military victory of 1965 which India almost disowned.

Pakistan grabbed that bit of inattention by India to regularly celebrate Defence of Pakistan Day on September 6 each year; over the years India had bigger victories of 1971 and 1999 to celebrate.

That is how the myth of a Pakistani victory in 1965 got etched into minds all over, an impression hopefully diluted this year and one which will progressively be weeded out.

Public focus has rightly remained on the events of 1965, the manner in which the war progressed, but clearly that is not enough because the follow-up and analysis is equally interesting and significant.

The first issue the public needs to remember is that it wasn't just a 22-day war; the war was actually a series of events from May till September 1965. Three events took place before the official date, September 1, from which the war situation is counted.

In April 1965 Pakistan launched a pre-emptive attack on Kanjrakot in Kutch leading to an armed standoff. In May 1965, the Kargil sector was activated by the occupation of Point 13620 and Black Rock along the Kargil-Dras road by the Pakistan army, in the vicinity of the Ceasefire Line.

The Kargil intrusions were removed by the Indian Army. Using both incidents as a case of 'testing the waters,' Pakistan finally launched its covert operation in J&K on August 5, calling it Operation Gibraltar.

India's offensive response at Haji Pir in late August 1965 was followed by Pakistan's Operation Grand Slam in the Akhnur sub sector on September 1, the date from which the 22-day war is officially counted.

In the post war events, Tashkent 1966 set the stage for much to follow. Zulfiqar Ali Bhutto, Pakistan's ambitious foreign minister, blamed Ayub Khan for the agreement to return territories captured in Punjab and Rajasthan by the Pakistan army.

It was a ploy to enhance his own position and absolve him from all blame although Pakistan actually occupied less than one third the quantum of territory held by India.

1965 broadened that schism and set the stage for the fast moving events of 1970-1971, which led to the ultimate defeat of Pakistan and the creation of Bangladesh.

If nothing else, the 1965 War acted as the testing ground for the civil-military leadership in India to implement some of the lessons of the 1962 defeat at the hands of the People's Liberation Army.

Pakistan did not cater for the robust cooperation and space afforded to the Indian armed forces by Prime Minister Lal Bahadur Shastri and Raksha Mantri Y B Chavan.

There were mistakes galore by India, but mostly overshadowed by landmark decisions such as the one to open the Punjab front on September 6 to relieve pressure on Akhnur, something Pakistan steadfastly believed could just not happen.

The roots of the famous advice on the timing of the war of 1971, by General (later Field Marshal) Sam Manekshaw, to Prime Minister Indira Gandhi, and its acceptance lay in the political military understanding developed in 1965.

One of the lessons in the strategic domain that cannot be wished away and is relevant even today is the perceived tentativeness of India in the international environment of that time.

In 1965, we had just emerged from a military defeat and a new leadership was at the helm. The economic situation was none too bright and we were on the PL-480 list for US food aid which did no good to our self-esteem.

The language issue was simmering in South India and Kashmir was in turbulence after the Hazratbal theft case. Externally, we were the leaders of the nonaligned, but our foreign equations gave us no confidence about pursuance of our national interests.

All this translated into a degree of tentativeness which affected our war fighting decisions. The reluctance to employ the Indian Air Force in the battle of Haji Pir and even in the morning of September 1 after the regular Pakistani forces crossed the Cease Fire Line in Akhnur was one of the outcomes of this tentativeness.

Directive orders to the IAF throughout the war restricted it primarily to Counter Surface Force Operations as Counter Air was considered unnecessarily provocative.

The Indian Navy was placed under restrictions of only defensive operations within a laid down zone and the vulnerability from South Asia's only submarine (PNS Ghazi) was perceived to the extreme.

In any armed standoff the escalatory ladder must no doubt be kept under control, but national tentativeness can prevent the discernment of national interest leading to caution beyond prudence.

Offensive action is a principal of war. No doubt, the decision to launch across the Cease Fire Line and capture Haji Pir to defeat Operation Gibraltar was a bold one as was the one to cross the Punjab border on September 6 to force retraction of the forces of Op Grand Slam from Akhnur, and both aims were achieved.

Yet, boldness and risk taking were not part of the operational ethos leading to lack of exploitation of initial success in both the Lahore sector as well as Sialkot.

This takes away nothing from the bold decisions to launch the operations, no doubt on recommendation of the then Army Commander Western Command, Lieutenant General Harbakhsh Singh.

The General Officer was one of the finest military leaders of his time. However, the sheer enormity of responsibility on his shoulders, in a period when neither means of communication were efficient nor transportation resources to visit and feel the pulse of the battlefield, must have had an effect on the handling of operations.

He virtually handled an area of responsibility which is today looked after by three field armies. Extrapolating to today's environment the Indian Army's defence of Akhnur and the attack on Haji Pir would have been handled by HQ Northern Command.

J&K, the bone of contention in this war, kept General Harbakhsh Singh engaged even as he was busy restoring an adverse situation around Khem Karan in Punjab.

To top it all, there were no reserves available unless we count some of the newly raised, half strength and ill equipped formations in that classification.

We learnt our lessons, but it took the Army long to convince the government. Areas of responsibility were re-designated and new headquarters raised in 1972, 1999 and 2004.

A take home lesson for perpetuity comes from General Harbakhsh's vast operational experience. Here was a man who knew the ground. He had fought in J&K during 1947-1948 in both sub sectors (was decorated with a Vir Chakra) where he eventually launched operations -- Haji Pir/Uri and Bugina/Tithwal.

Where ground knowledge exists there is supreme confidence. He had commanded the brigade at Damana on the immediate flank of Akhnur and that too came handy.

It is always good to have a senior commander in charge of a field army or corps if he has deep knowledge of ground and does not have to get back to the map for every decision or depend on the knowledge of his staff.

Is that a practice that the Indian Army follows today; I suppose just about. However, I would strongly advise that, to prevent any tentativeness in decision making and promote robustness in execution.

There is no doubt that the war of 1965 has received insufficient attention from our men in uniform and strategic analysts. One is glad to see it is getting the right focus.

Its potential to add intellectual capital to the entire domain of national security is immense. One only has to touch an issue and it comes alive with examples of failures and successes.

It is the former which provides the greater scope for learning.

The entire issue of tentativeness as a nation needs to be looked at with a fresh eye. It should not be that Pakistan today perceives the return of tentativeness simply because it possesses matching nuclear capability.

Its recent utterances and tendency to use pinpricks to try our patience appear reminiscent of 1965. We are a strong nation, emerging stronger. There are inner infirmities which are at parallel with any emerging democratic nation with similar diversity.

The reminder from 1965 should be clear; Pakistan should never consider India weak and incapable of defending its national interests.

IMAGE: Indian troops raise the tricolour at Haji Pir Pass after vanquishing the Pakistan army in the 1965 war.