I believe that UP has been doing this consistently -- of grossly under-reporting the Covid-positive cases.
Nothing else explains the glaring differences in UP's positivity rates versus other badly affected states, says Omkar Goswami. 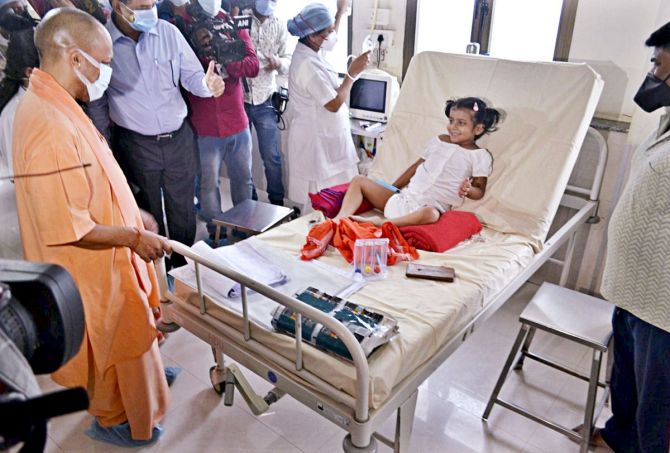 'States should be encouraged to report their numbers transparently -- Prime Minister Narendra Modi, May 15, 2021.

Uttar Pradesh, India's most populous state, has the fourth-largest number of confirmed COVID-19 cases. According to the records, between February 9 and May 17, 2021, UP officially registered over a million Covid-positive cases; and 9,125 certified Covid-related deaths [see https://www.covid19­india.org].

I was getting bothered about the UP numbers. These clashed with all that we know about UP. About its miserable health and hospital facilities; its dysfunctional district administrations; that most citizens of the state do not bother to mask themselves; of what the doms in the funeral ghats in Varanasi said of excess deaths in late April and early May; and of the corpses floating down the Ganga, abandoned for the want of firewood. These flew in the face of the official UP data.

Yet, I couldn't get to the bottom of exactly what was wrong with the numbers. Given that www.covid19india.org does not allow downloading data, I engaged in physically copying all relevant data for India and the worst five states -- Maharashtra, Karnataka, Kerala, UP, and Tamil Nadu -- from February 9 to May 17, 2021, and then transcribing these on to an Excel spreadsheet. 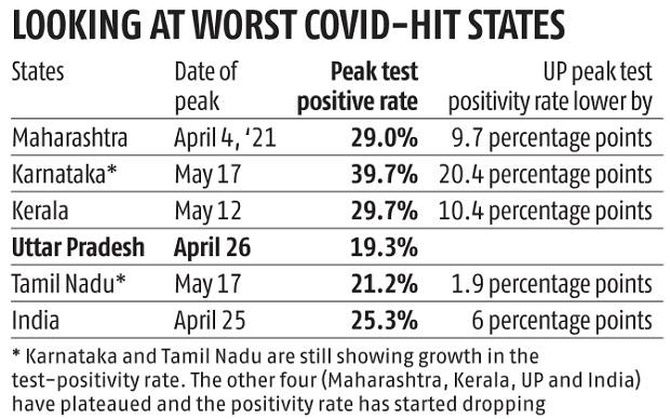 Then came the Eureka moment.

A person is officially Covid-positive when an RT-PCR or a rapid antigen test says so.

According to protocol, all forms that are filled prior to the tests are submitted to the appropriate government agency. So too the results.

Therefore, any state government, district administration, or municipal corporation has two very important pieces of data, which are received daily: First, the number of tests conducted; and second, the results.

Those that are Covid-positive are tagged separately. From here, one can construct the daily test-positivity ratio, ie, the tests that were Covid-positive to the total number of tests conducted.

The test-positivity indicator strongly suggests that UP has been fudging the Covid data. Let me explain.

A priori, one would expect that the worst five Covid-ravaged states of India ought to have broadly similar test-positivity results. Not necessarily contemporaneously, as the disease hit each state at different times, but certainly over the cycle across each of the five worst Covid-affected states. 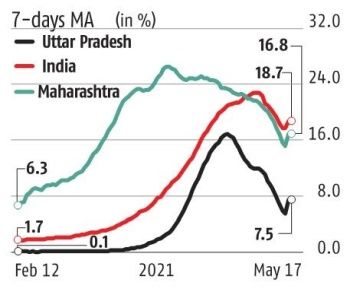 That is not the case for UP, which, as the accompanying table and charts show, is a glaring outlier.

Above is the data in tabular form.

Both that table and the charts alongside and below show that UP’s peak test positivity rate in the second wave has been appreciably lower than those of Maharashtra, Karnataka, Kerala, Tamil Nadu and India as a whole.

Why is this so? 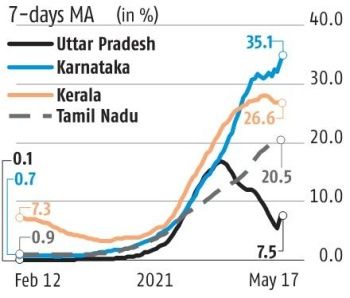 Here's my hypothesis. To please the powers in Lucknow, district authorities started eliminating a large number of Covid-positive reports when passing the data on to the state administration.

This had to be hurriedly done on a daily basis, which didn't give them sufficient time to also eliminate the corresponding number of tests. In any event, if they did that, it would show UP trailing in the number of tests conducted, which was not on.

I believe that UP has been doing this consistently -- of grossly under-reporting the Covid-positive cases. Nothing else explains the glaring differences in UP’s positivity rates versus other badly affected states.

In this horrific pandemic, when a state fudges such critical data how can one believe anything it says?

This is dedicated to Sunil Jain (1963-2021) of the Financial Express: Student, friend and whose work I admired... gone to Covid.