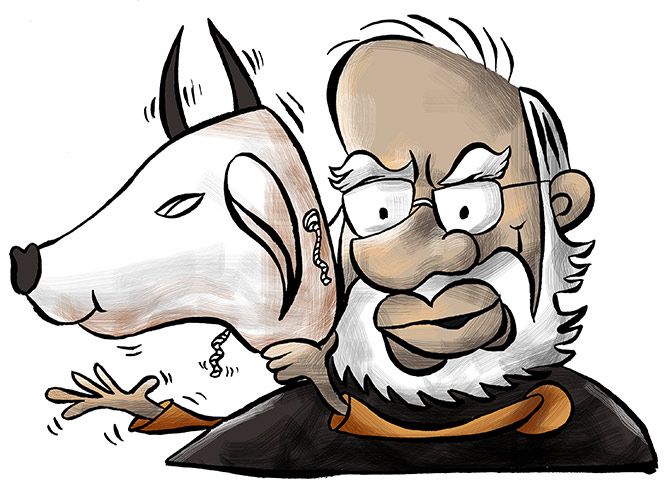 Brand guru Alyque Padamsee had a favourite boast: Clients ask me to reposition their brands. I tell them, I never reposition my brand. I just reposition my competitor's brand.

Alyque passed away recently. Or else it would have been fun to go chat with him on how Narendra Damodardas Modi and Amit Anilchandra Shah have done exactly the opposite: Blundered into becoming the opposite of the brand proposition that conquered the vote bazaar in 2014.

In the run-up to the summer of 2014, Mr Modi rarely spoke any words of negativity and none of pessimism. His message was strong, consistent, convincing: Development, growth, jobs, hard power, achche din (better times) on all fronts.

He promised a clean, decisive, minimum government, with maximum governance.

He talked of the future and how he would revolutionise it, particularly for India's youth.

If at all he brought up the past, it was the failings, policy paralysis, non-governance of UPA-2, the humiliation of its prime minister, the scandalous mess with environmental clearances and, indeed, its many scams.

He wasn't dividing or polarising. His campaign theme was: Sabka Saath, Sabka Vikas (to be with all, and to enable all to grow).

The underlying message was: I know the problems. I am coming with solutions. Give me the mandate, time and trust.

It was a great product. It demolished its competition.

Six months to go for the next elections, his message is mostly the opposite.

He emerged as India's strongest prime minister since Indira Gandhi, but now complains that the Congress doesn't let him work. It even objects to his saying 'Bharat Mata ki Jai', he said in the recent election campaign.

So, the same 10 Janpath cabal that throttled Manmohan Singh, apparently, is strangling him too, with just 47 in the Lok Sabha.

Instead of listing corruption scams he busted and the guilty he punished, he plugs the many new and old alleged sins of the Gandhi and Chidambaram families.

This, after 54 months in power and full misuse of the 'agencies'.

Instead of minimum government and Gujarat-like entrepreneur-led growth, he is offering more handouts. He talks rarely of the future now, and is obsessed with the past -- a very distant one: Jawaharlal Nehru, his father and daughter, and Patel and Shastri. The promise of jobs, vikas, and prosperity is shelved.

Instead of unity, sabka saath, etc, religious polarisation is the mission of the season. Yogi Adityanath (Uttar Pradesh Chief Minister Ajay Singh Bisht) and Mr Shah are its heavy artillery.

This is how dramatically he has repositioned his own brand or product, seeking votes against his rivals's ancient past rather than on his own performance and promises.

Almost like: Oh, they are asking for jobs? Give them cow...

The jobless armies of youthful India while away time at village squares, playing carrom, cards, or just smoking, chatting, or mostly watching rubbish on their Chinese smartphones with almost-free data. They are getting angrier and desperate.

Are they willing to sacrifice it all, their aspiration and quest for self-esteem, which brought Mr Modi to power, and now shift their heart and soul to protect the cow? It doesn't show in the recent election results.

If anything, jubilant Modi critics and activists are wrong in blaming these results merely on rural, farmer distress.

The data shows the BJP has lost most of the cities in these states. The biggest, loudest and the most optimistic Modi supporters were the urban and semi-urban middle classes and unemployed youth. They aren't fired by the call to resurrect Nehru in 2018 and then cremate him again.

After the verdict of 2014, I had written that this is the rise of India's millennial, non-ideological, transactional 'I-don't-owe-you-nothing' generation. They detested entitlement of all kinds, especially of dynasty, and accordingly reduced the Congress to nothing.

Mr Modi and Mr Shah are now calling them to fight the same dynasty again. It isn't working. The voter is bemused, and her question seems to be 'lekin aap toh aise na thhe (this isn't who I thought you were).'

In that genius 2014 campaign, Mr Modi used a wonderful story to take apart Sonia Gandhi and her National Advisory Council's welfarism. A farmer walking through a forest crossed the path of a hungry lion. The lion crouched to kill and eat him. But the farmer was calm.

The lion paused, frowned, gave the farmer a close look, and asked, 'But where is the gun?'

The farmer pulled out a folded paper from his kurta pocket and said, 'Here, sher bhai, not the gun yet, but Soniaji has given me a gun licence.'

Thousands laughed and understood the message. That poverty, underemployment, and aspiration today were not to be addressed with silly entitlement schemes, even if backed with rights-based laws (the gun licence metaphor).

He also called the MGNREGA the greatest evidence of (mostly) the Congress government's failure for decades. Now he's throwing more money into it, and offering more and more similar yojanas, Ayushman Bharat being his 'gun licence' for the health of the poor.

He defeated the dynasty in 2014, but embraced its political economy. His non-ideological voters, who made the difference in 2014 and until Uttar Pradesh last year, must be confused, and it shows.

Arun Shourie was prescient in describing the BJP government as the 'Congress plus a cow' so early in its tenure. If anything, he was being kind.

It swears by the public sector, shoving more taxpayer money into banks she nationalised, getting one PSU to buy another, maligning rivals as unpatriotic.

If Mr Modi's BJP is the old Congress plus a cow, where is the product differentiation?

Okay, Mr Modi, Mr Shah, even Mohan Bhagwat aren't dynasts. But what is so different and attractive about what they bring to the table? A fear of minorities? It's a non-starter.

The BJP's one key promise was busting corruption. It is true that we haven't seen major scandals under it and Mr Modi's titanium image for personal integrity is undented. But corruption lower down, where citizen-State friction takes place, is worse than before.

All categories of taxmen, given draconian new powers, targets and the licence to be vindictive, are on the rampage.

In Mumbai, for example, the old, Congress-style rent-seeking on building permits and property transfers seems to be back and anyone you talk to is complaining.

Of course, in whispers. Nobody wants a call from the taxman or a visit from the ED or CBI.

Meanwhile, what is the government's record in scandal-busting? The 2G case has unravelled and all suspects acquitted.

In coal, all Congress/UPA politicians and corporates have gone unmolested while three innocent IAS officers have been jailed for doing nothing corrupt and that too under a law this government has repealed.

The Commonwealth Games, Adarsh, Air India purchases -- all the storied scams that turned India's politics upside down are forgotten, with no guilty punished, very few under trial.

The government and its agencies have spent all their time fixing rivals in new cases, and failed at that too.

Mr Modi and Mr Shah entered 2014 with an aura that there was nothing that was broken they couldn't fix. Now they look and sound bitter, angry, victimised, vindictive, and negative and are seeking votes against their comprehensively defeated opponents rather than for themselves.

Why such a spectacular self-repositioning while on a winning ticket? Alyque Padamsee would laugh.