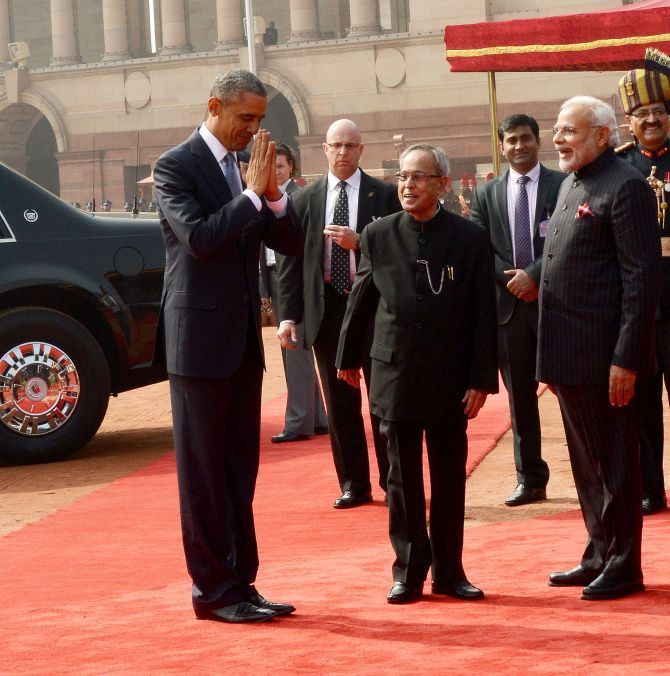 'We are no longer striving for a strategic partnership. We have arrived at one.'

The lion's share of the credit for this transformation goes to Prime Minister Narendra Modi, says Dr Vijay Chauthaiwale.

There are several 'firsts' in United States President Barack Obama's visit to India.

His second visit as US president, his attendance at the Republic Day parade, being out in the open for two hours never mind the tense moments for US security etc are all aspects already discussed widely.

Undoubtedly, the visit was very high on optics, with the Republic Day celebrations providing the perfect backdrop for the same. Modi, bypassing protocol, received Obama at the airport.

Their friendly hugs, walk the talk, 'chai pe charcha' all re-enforced the fact that the two leaders have developed an excellent personal chemistry.

In normal circumstances, given the growing Indian economy, a middle class of the size of the entire US population, with so many highly qualified Indians settled in the US having an average income one-and-a-half times higher than that of US citizens, all these would have seemed quite natural.

But against the backdrop of the fact that the US establishment, as late as one year ago, was still ambiguous over the 'visa' issue, this transformation is something no one had anticipated.

No doubt, US policy-makers realised the change of wind quickly and opened their arms to welcome Modi. The lion's share of the credit for this transformation indeed goes to Modi.

First, with his limited international exposure as chief minister of Gujarat (and given the visa restriction he faced from the US), experts in the foreign policy establishment did not expect that foreign policy in general would come out as one of the most significant thrust areas of Modi's government.

Second, he himself showed great statesmanship by not allowing personal issues to over-ride the national interest. Even during the Lok Sabha election campaign, when asked about India-US relations if he became PM, Modi said these issues cannot be dealt on the basis of personal likes and dislikes, but would be determined by the national interest.

The conscious effort from both sides to walk the extra mile to build bridges based on trust and partnership indeed had positive outcomes. The mutual trust and admiration between the common citizens of India and US has existed for a long time since Swami Vivekananda introduced the Hindu value system to America and the American work culture to India, and Pandit Ravi Shankar introduced Indian classical music to the West.

A steady wave of Indian businessmen and traders, followed by professionals like doctors, scientists and IT specialists, further nurtured this bonding.

What was lacking was the institutionalisation of this trust and partnership between the two countries. An emphasis on juxtaposing US-Pakistan relations while dealing with India, India's close partnership (especially in the defence sector) with the then USSR/Russia, India's nuclear programme etc were some of the reasons for this.

Then prime minister Atal Bihari Vajpayee broke these barriers first by openly declaring India as a responsible nuclear State and describing the US and India as 'natural allies.'

The US, to its credit, too has moved away from bracketing India and Pakistan (described by Lisa Curtis of the Heritage Foundation as the 'India-Pakistan hyphenation paradigm').

What is significant about the current India-US relationship is the institutionalisation of the spirit of trust and partnership.

Gururaj 'Desh' Deshpande, the US-based venture capitalist, entrepreneur and philanthropist described it to me aptly. He wrote, 'I left India in 1973 and have been away for over 42 years. I have been coming to India a few times a year now. Over the course of time, I have seen a very close relationship develop between the citizens of America and the citizens of India. They naturally connect because they share common values and their philosophies of life align.'

'However, the two countries have not trusted each other. I was so pleased that Prime Minister Modi and President Obama have dramatically changed that equation. In the years to come it will be heartwarming to see both countries and citizens work together to make this a better world.'

That is why both India and the US are now seeing unprecedented opportunities in the areas of business, trade, defence, environment and strategic relations. Modi's conscious effort to bring India to the top 50 countries for 'ease of doing business,' Finance Minister Arun Jaitley's emphasis in Davos on 'a fair, reasonable and non-adversarial tax regime' have created positive vibes in the mind of global investors.

Resolving the significant issues hindering civil nuclear cooperation was a pleasant surprise even to India-US partnership enthusiasts. Though issues over climate change are not fully resolved yet, the announcement of US investment of $1 billion for solar energy is a step in the right direction.

Over a period of time, the importance of the foundation laid for defence and strategic ties by President Obama and Prime Minister Modi is likely to be more evident. The US media (like The New York Times) and analysts have already started commenting on the same.

According to Lisa Curtis, 'The most significant achievement of the visit included progress in military and defence cooperation.' She further wrote to me, 'The extensive joint statement and successful visit show we are no longer striving for a strategic partnership. We have arrived at one.'

In short, the alliance of minds between Modi and Obama has now resulted in a strategic partnership between the two countries on multiple fronts.

It is high time that perpetual Modi critics realise the fact that optics is the outword expression of the same and not a substitute.