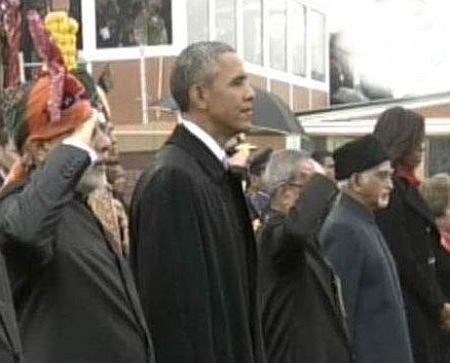 The new storm-troopers of Indian patriotism were not bothered about the fine print of the nuclear deal, where reporters are saying the Indian government has given a written declaration that the foreign nuclear reactor maker will not have to pay for damages in case of a nuclear disaster.

The new storm-troopers of Indian patriotism were only worried about who is raising his hand at the Republic Day parade, how much and when, says Mango Indian.

As we the people of India watched, with lumps in our throats and moist eyes, the widows of Major Mukund Varadarajan and Naik Neeraj Kumar Singh receive the Ashok Chakra as the voiceover told us how the soldiers had died for the country in Kashmir, some were scanning the visuals for hate.

The 'controversy' erupted on that new epicentre of all spite, social media.

Why wasn't Vice-President Hamid Ansari saluting when the national anthem was being played, demanded the new thekedaars of patriotism.

It blew up to such proportions that the vice-president's office had to issue a clarification.

When the Vice-President is the Principal Dignitary, he salutes during the national anthem, wearing a headgear, as done at the NCC camp this year,' Gurdeep Sappal, joint secretary and officer on special duty to the vice-president, said in a statement.

When the veteran strategic affairs and northeast expert Nitin Gokhale tweeted that Vice-President Ansari did no wrong as per protocol, this was a tweet in reply:

'few of his past action like not touching aarti at dushera, refused to sing vandemataram etc makes 1suspcs.'

That was the nub. It was the vice-president's religion that made him suspect.

This is where India's patriotism has plummeted to.

Nadir is too lofty a word.

There was another news report, in The Hindu, that on first glance had nothing to do with the witch-hunt against Vice-President Ansari, but which really had everything to do with it.

Liyi Noshi, a lawyer who is from the Northeast and has lived in Delhi for the past 12 years, left the Republic Day parade in tears, because she was asked if she was Indian and if she had cleared security.

Someone in the crowd felt about Noshi what the bigots on social media felt about the vice-president: That here was someone who was not as enthusiastic about the idea of India as they were.

I was reminded of a poem by the British children's writer Michael Rosenberg:

I sometimes fear that
people think that fascism arrives in fancy dress
worn by grotesques and monsters
as played out in endless re-runs of the Nazis.
Fascism arrives as your friend.
It will restore your honour,
make you feel proud,
protect your house,
give you a job,
clean up the neighbourhood,
remind you of how great you once were,
clear out the venal and the corrupt,
remove anything you feel is unlike you...
It doesn't walk in saying,
"Our programme means militias, mass imprisonments, transportations, war and persecution."

Patriotism is like love: When it has to be enforced, it isn't real. And the enforcement of a homogeneous view of love for the country is a particularly divisive feature that has ripped apart societies throughout history.

Thinkers who have warned against overt patriotism include Leo Tolstoy, and Rabindranath Tagore.

And again, the new storm-troopers of Indian patriotism were not bothered about the fine print of the nuclear deal, where reporters are saying the Indian government has given a written declaration that the foreign nuclear reactor maker will not have to pay for damages in case of a nuclear disaster. Bhopal II, anyone?

The new storm-troopers of Indian patriotism were only worried about who is raising his hand how much and when.

All such appeals to common sense are perhaps alien to this new India where protocol, that word for stuffed-up officialese, is now being bandied about as a test for the love of one’s country.

Laws against 'treason,' that the British formulated to keep Indian subjects at bay, are being invoked for people who don't stand up for national anthems in a movie hall. Even though there is no punishment spelt out in the laws about 'insult' to national emblems.

One cannot help but worry that this India, where one's allegiance must be worn on one's sleeve -- nay, make that sewn in by the couturier into small, golden, letters -- is becoming like that scene from the horror rock-opera The Wall, in which the artist becomes a dictator who punishes everyone 'different' while the crowd roars its approval:

We're gonna find out where you fans really stand.
Are there any queers in the theater tonight?
Get them up against the wall.
There's one in the spotlight, he don't look right to me,
Get him up against the wall.
That one looks Jewish!
And that one's a coon!
Who let all of this riff-raff into the room?
There's one smoking a joint!
And another with spots!
If I had my way,
I'd have all of you shot!

It was left to the US president to sound a warning.

'India will succeed so long as it is not splintered on religious lines,' Barack Obama said at his town-hall meeting in New Delhi on Tuesday.

Is there anybody out there listening, or is everyone -- like that scene from The Wall -- busy cheering?

Image: A video grab of Vice-President Hamid Ansari, second from right, at the Republic Day parade. The manufactured outrage on social media blew up to such a proportion that the vice-president's office had to issue a clarification. 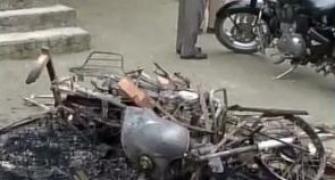 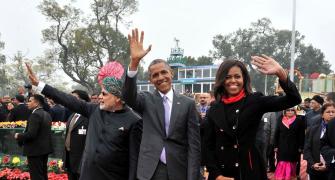 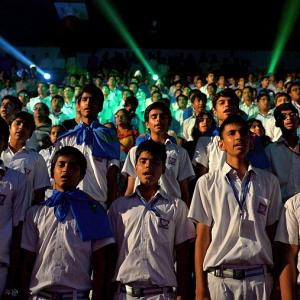 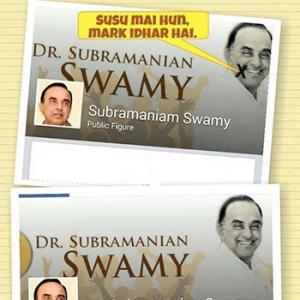