News
Business
Movies
Sports
Cricket
Get Ahead
Money Tips
Shopping
Sign in  |  Create a Rediffmail account
Rediff.com  » News » Nearly everyone is missing a sense of purpose in govt

Nearly everyone is missing a sense of purpose in govt

When it came to power, the BJP was a government with a difference: it had a majority in the Lok Sabha. Frequently the party itself forgets this 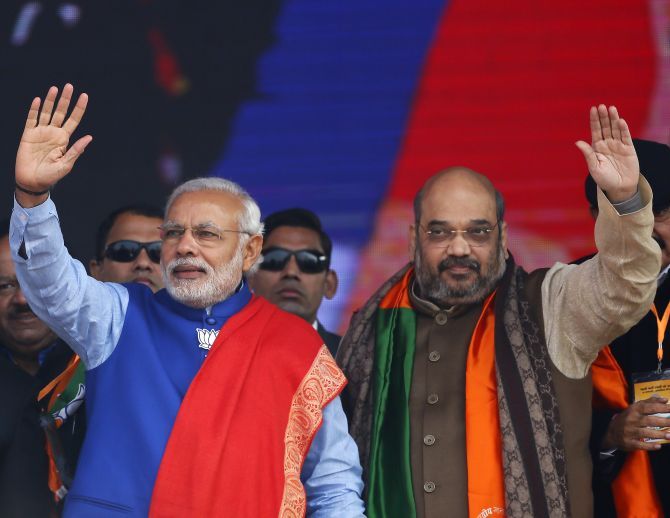 A meeting of the Rashtriya Swayamsevak Sangh brass concluded in Haldwani, Uttarakhand last week. The organisation discussed several issues including the performance of the Narendra Modi-led government. In small groups, some concern was voiced about the drift in the government, although institutionally the Sangh refrained from any comment. The only public decision was that office-bearer Suresh Soni would be on a one-year sabbatical from the Sangh. He would continue to be sahsarkaryavah (joint general secretary) and the charge of his work would continue to stay with him but, as a Sangh supporter put it delicately, he would not be actively involved in the work of the Sangh and nor did the Sangh expect much activity from him.

When the Narendra Modi government came to power, it was at Soni's persuasion that the Sangh did not object strenuously when Arun Jaitley was appointed minister despite losing the election from Amritsar. This is the same Sangh that put its foot down and vetoed Jaswant Singh's appointment in the government when he lost the election in 1998. Atal Bihari Vajpayee had to accommodate him as deputy chairman, Planning Commission. Soni's influence was considerable. So his sabbatical is a surprise.

Even more surprising is the chatter that it might be leave preparatory to his retirement. What this means is that Krishna Gopal, seconded to the Bharatiya Janata Party from the Sangh and Soni's successor in that job, will now be free to assert himself.

This comes after a series of compromises the National Democratic Alliance government has made or has tolerated. Otherwise so conscious of its image and so proud of its outreach, the party did not appear to miss MP from Gurdaspur, Vinod Khanna, who was absent through the most traumatic event the government has seen in its one year in office. On the day of the Gurdaspur attack, the only evidence that Khanna was representing Gurdaspur came from a tweet by him around 4 pm. The Dina Nagar MLA, Aruna Chaudhary, was in Mumbai on a personal visit that day. It fell to Shiromani Akali Dal MP (from Anandpur Sahib, the adjoining constituency) Prem Singh Chandumajra to hold the hand of the families who had been bereaved. Little wonder then that the BJP is in the state it is in Punjab.

A cabinet minister elected from Uttar Pradesh said haltingly that he hardly ever visited Lucknow these days, opting to go straight to his constituency from the airport. He doesn't want to tread on any toes and isn't sure how his intervention in UP would be received. Another minister said in the initial months of the government he would enthusiastically defend the government: but after the PM called him a few times to reprove him, he stopped speaking up. Granted, the BJP has only three MLAs in Delhi. But how many times have you heard any of its seven MPs criticising the Delhi regime?

Ennui is the wrong word. Everyone in the BJP is walking on eggshells.

Correction. Everyone who has something to lose.

Those who have nothing to lose -- the RSS, and lightweight Members of Parliament like Bharat Singh, MP from Ballia, who complained in the presence of the prime minister at a meeting of the parliamentary party that ministers were not even acknowledging letters from MPs; or Shanta Kumar, a BJP veteran and MP from Kangra, who charged in a letter to party president Amit Shah that the BJP was losing its moral compass -- are now speaking out.

The most interesting instance of this was at the meeting of the NITI Aayog a couple of weeks ago called by the PM on the land bill. Only chief ministers are allowed to attend these meetings possibly because the PM wants them to speak as freely as they want. So the speeches are extempore and the text cannot be confirmed. Chief Minister of Madhya Pradesh Shivraj Singh Chouhan arrived in the midst of the concerted attack on him over the Vyapam scam. But at the NITI Aayog discussion, he made a speech that wasn't in the slightest bit defensive. Drawing heavily from allegories in the Mahabharata, he said the Centre should do nothing that could earn it the sobriquet of "rannchhod" (epithet for someone who has fled the battlefield). He cited Brihannala as an example. When Arjuna spurned the advances of the apsara Urvashi, she cursed him and said he would become a eunuch, fit only to sing and dance with other women. Krishna comforted him and said what seemed like a handicap could also become an advantage. Sure enough, the curse came in handy when after 12 years of exile the Pandavas had to spend the 13th year incognito. Arjuna spent the year as Brihannala, a eunuch who taught singing and dancing in the court of King Virata. After that his manhood was restored, he picked up the gandiva and proceeded to win the war for the Pandavas: the point being (possibly) that handicaps could also become advantages, rather like jujutsu where the opponent's force is manipulated against him.

Obscure? But the PM got the message and announced after that meeting that states could follow any land acquisition policy they liked and the 2015 land bill was not a matter of life and death.

When it came to power, the BJP was a government with a difference: it had a majority in the Lok Sabha. Frequently the party itself forgets this. 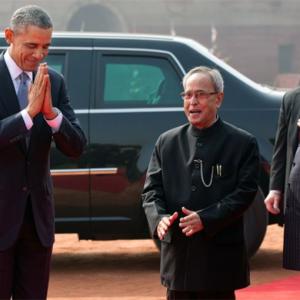 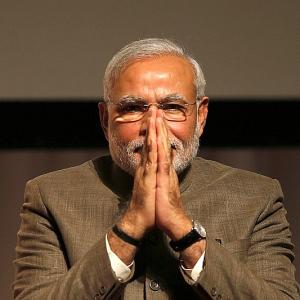