'The benefits may not be visible immediately, but the general feeling of wellness, rejuvenation and relaxation is palpable.'
'A former President had the habit of undergoing Ayurveda treatment every year in Kerala and he remarked once that he felt ten years younger every time he took the treatment.'
Ambassador T P Sreenivasan on his first Ayurveda treatment.
Illustration: Dominic Xavier/Rediff.com 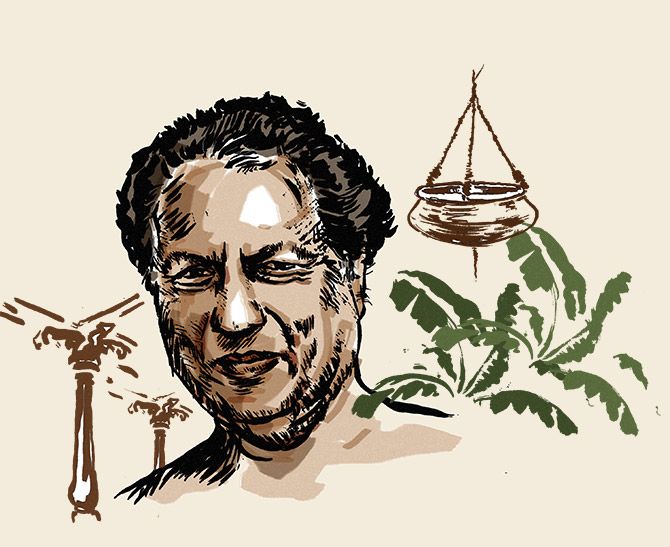 An Indian Ambassador has to be a walking encyclopedia on everything from the Indus Valley Civilisation to Infosys.

This was difficult, particularly before the advent of Wikipedia. In countries like Fiji, the Indian envoy is the arbiter on their religious rituals and social habits, which are no more in vogue in modern India.

In my case, a non-Hindi-speaking Indian envoy was a curiosity and I had to take a crash course in spoken Hindi, though it is slightly different from the Fiji Hindi spoken on the islands.

I am sure the Fiji Indians must have been bewildered by the diversity among the Indian representatives sent there, but we managed with some bold innovative interpretations of Indian culture and rituals.

In different countries, different aspects of Indian life and culture get projected depending on the state from where the majority of the Indian community comes.

With a large number of Keralites there, Austria has several Ayurveda centres, some run by Indian doctors, who practiced allopathic medicines also.

Ayurveda is not just an alternative medical system, but a part of the wellness culture in Germany and Austria.

I had the privilege of inaugurating some of these centres in Vienna as the Indian envoy to Austria. I made it a point to do that, knowing well that Ayurveda is a part of the soft power assets of India in the region.

I was startled for a moment because I never had such treatment and I did not want to tell a lie.

On the other hand, I knew the credibility of what I said would be lost.

In a moment, I found an answer: "For an Indian, Ayurveda is a way of life and an elixir which helps him from the cradle to the grave. From the honey that is given to a new born baby to the water of the Ganges given to a dying person, we are linked to Ayurveda," I said.

The journalist and the audience appeared satisfied.

Very recently, I narrated this incident at an event in Kottakkal, one of the most prominent Ayurveda centres in the world, which drew wild applause.

Incidentally, I was invited to Kottakkal, not to speak on Ayurveda, but on the 'World of 2017 and Beyond'!

The main takeaways from that visit was the generous hospitality and courtesies of the doyen of Ayurveda, Dr P K Warrier and an Ayurveda secret revealed by Metroman Dr E Sreedharan.

He said that he learnt from a recent experience that the best cure for gout is water in which papaya peels are boiled.

Against this backdrop, my wife and I decided to go for an Ayurveda wellness treatment, when the opportunity arose recently.

My hesitation to go for such an experience was on two counts. Ever since I was a child, I had hated the idea of oil baths and had refrained from using oil when I began to take baths on my own.

The other reason was the extreme intrusiveness of massages without clothes. Of course, it is true that though we spend much on clothes and ornaments, all of them have to come off to enjoy some real pleasures.

The choice of place was made because of our friends from the US, Gopal and Nalini Pillai who have been coming to Krishnendu, an Ayurveda hospital not far from my hometown, Kayamkulam near Haripad. The hospital is headed by Dr Mohan Babu, a fourth generation traditional Ayurveda practitioner.

The place is modern, but the ambience and treatment are strictly on traditional lines.

The doctor himself is a living model, as he looks much younger than his age, obviously because of the Ayurveda way of life.

I was still sceptical as we checked in after an examination by the doctor using modern clinical methods. Of course, mine was sukha chikitsa or comfort treatment, not for any particular ailment.

The experience was much better than I had expected, though I was still irritable with the near nudity and the oil all over me.

Two able bodied young men started to work on me with extraordinary efficiency and scientific precision.

Though I was told that I could choose the level of pressure, I let them do as they thought appropriate and they followed a pattern of individual and synchronised massage.

They kept checking with me whether I was comfortable, but otherwise, I was just a human body to be massaged into shape.

My CV or personality was of no consequence to them. It was oil first from head to foot and then massage.

Then a thorough rubbing with a herbal package in a piece of cloth.

It was so well orchestrated that there was no moment to waste.

Only the minimum conversation, all about postures and pressure.

After a couple of days, things moved on to massage with a pack of medicinal hot rice paste, but again with business-like movements. Clearly, the treatment is scientific, but artistically delivered.

My wife had the same experience from the sprightly and helpful young women who worked on her. It is the Ayurveda culture, happily preserved at its best at the Krishnendu hospital.

Speaking to those who have experience of other resorts and hospitals, the general situation in the reputed ones is similar, but the system varies from place to place on the regimen to be kept during treatment.

Some are very strict about diet and permission to go out during the course of the treatment. Much to our relief, the regimen at Krishnendu was fairly liberal within limits.

The friendliness and care of the doctors and the staff were striking. The food was modest and healthy, but tasty and fresh.

The benefits of such treatment may not be visible immediately, but the general feeling of wellness, rejuvenation and relaxation is palpable.

A former President of India had the habit of undergoing Ayurveda treatment every year in Kerala and he remarked once that he felt ten years younger every time he took the treatment.

The joke was that after seven visits, he became so young that he had to crawl back home!

We had no such feeling, but felt that the time and money spent at Krishnendu were very much worth it.

No wonder our friends and many others come all the way from the other end of the world for Ayurveda treatment at one of its most authentic sources.