'It is because of the feared domestic backlash that the Modi government is now stepping up pressure on Pakistan to accommodate Indian interests,' says Rajeev Sharma. 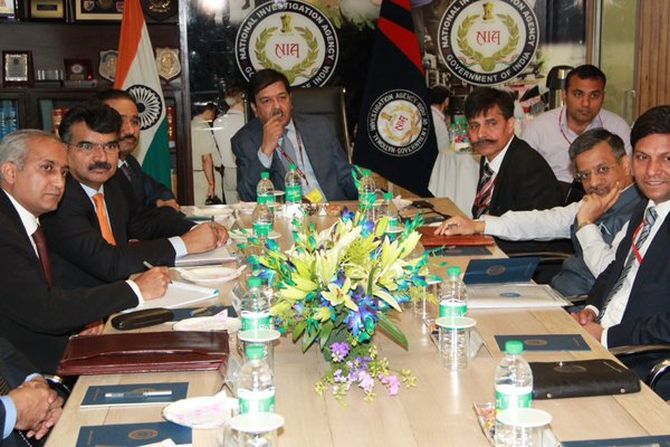 Now that Pakistan's Joint Investigation Team has wrapped up its probe into the Pathankot airbase terror attack since it arrived in India on March 27, India-Pakistan bilateral relations move on to the next delicate phase while domestically the Narendra Modi government will be in an uncanny situation of depending on Pakistan to bail it out.

It is because of the feared domestic backlash that the Modi government is now stepping up pressure on Pakistan to accommodate Indian interests just as India had accommodated Pakistani interests by allowing a historic concession to Pakistan to visit the crime scene of a terror attack even though the attack was scripted and choreographed by elements based in Pakistan.

India pushed the envelope on April 1 and formally made clear some of the concrete deliverables it wants from Pakistan in the Pathankot case. Sharad Kumar, Director General, National Investigation Agency, released an exhaustive five paragraph statement on Friday on the Pakistani JIT's visit and made it clear that an Indian team would like to visit Pakistan 'on the basis of reciprocity' as per the mutually agreed terms of reference between the two sides.

The NIA chief's media statement is apparently aimed at countering the Congress allegations.

The relevant quote from the NIA chief's statement is as follows: 'The Pakistan JIT was informed that a team of NIA officials would like to visit Pakistan to carry forward the investigation in the Pathankot attack.'

Significantly, Sharad Kumar's statement underlined the principle of reciprocity and said: 'The interaction with JIT was held in accordance with terms of reference mutually agreed on the basis of reciprocity.'

He also noted that Pakistani JIT assured India of its full cooperation and promised to execute the Letter Rogatory which has been received by them.

The reference to LR is directly aimed at the Congress party’s criticism that no Letter Rogatory had been signed between the two sides before the Pakistani JIT's arrival in India.

On March 30, Congress leader Kapil Sibal launched a scathing attack on the Modi government’s Pakistan policy in context of the Pathankot episode. Sibal said it should have been an Indian team visiting Pakistan to probe the Pathankot terror attack and not the other way round.

'Pakistan should have also shared before sending a team or before India accepting team information about the Bahawalpur conspiracy and the details which are available to them,' Sibal added. 'It is ironic that when have people coming here to find out what has happened, who should actually be giving us information how this had happened and why it happened and why it was allowed to happen?'

On April 1, the Congress continued to attack the Modi government for allowing the Pakistani JIT to visit the Pathankot airbase. 'It is indeed strange and contradictory that a senior ISI officer and other state officers are part of the JIT invited to India to investigate Pathankot terror when various anti-India terrorist organisations/individuals of the likes of Maulana Masood Azhar actually flourish with the active patronage of the ISI and other intelligence agencies in Pakistan,' Congress spokesman Abhishek Manu Singhvi remarked on Friday.

The NIA chief's statement listed other demands that India has made to Pakistan. These include voice samples of some senior Jaish-e-Mohammed office-bearers, DNA sample of the mother of slain terrorist Nasir Hussain, verification of various articles seized from the terrorists including arms and ammunition as mentioned in the Letter Rogatory sent earlier to Pakistan and verification of identities and addresses of the four terrorists that NIA had shared with Pakistan earlier.

It remains to be seen how Pakistan reciprocates. Prime Minister Narendra Modi would do well to always remember the golden words of his predecessor Manmohan Singh in Pakistan’s context: 'Trust, but verify.'

IMAGE: The Pakistani JIT at the NIA headquarters.