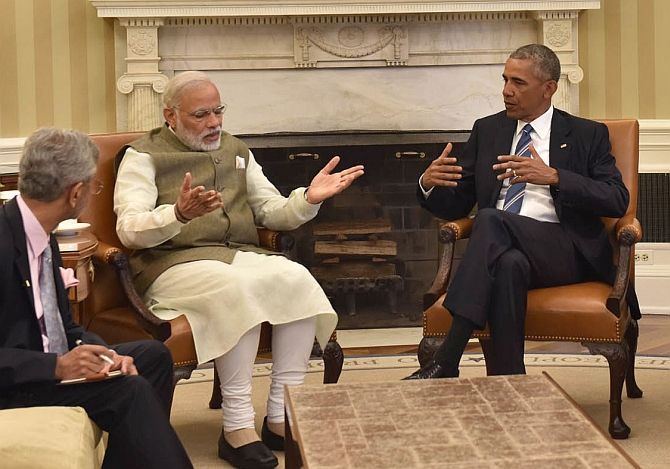 'We are witnessing a spectacle of breathtakingly creative diplomacy at work, riveted on the firm foundations of the country's strategic autonomy,' says Ambassador M K Bhadrakumar.

Indian diplomacy is on a roll. And it is indeed a wonderful sight to see.

Can it be that Prime Minister Narendra Modi is, finally, applying himself to a restructuring of India's foreign policies to take them away from the rut of a US-centric trajectory? For sure, that is a tantalising thought.

It certainly needed audacity on the part of External Affairs Minister Sushma Swaraj to assert at her press conference in New Delhi on Sunday that India's commitment to a non-aligned foreign policy -- 'strategic autonomy' as the post-Cold War idiom calls it -- is unwavering.

Consider the following: The prime minister's first act after the recent visit to the United States (which had a measly outcome except by way of political theatre) was to put a call through to Russian President Vladimir Putin.

Modi's initiative was both symbolic and substantive.

The symbolism that Indian diplomacy has a mind of its own could not have been lost on even incorrigibly dogmatic critics of the present government's foreign policies, who chastise Modi as a man possessed, tying India to the American stables.

The PM's phone call to Putin was substantive insofar as he exchanged notes with the Russian leader on an upcoming event of momentous importance to our foreign policy and diplomacy, namely, India's membership of the Shanghai Cooperation Organisation.

Besides, the PM invoked the 'privileged strategic partnership' between the two countries and sought Putin's intervention with China over the issue of India's membership of the Nuclear Suppliers Group.

Putin has since disclosed in the weekend that Moscow has been in touch with Beijing on the NSG issue.

The PM followed up by directing Foreign Secretary S Jaishankar to pay an unscheduled visit to Beijing on June 16-17 with a broad spectrum brief to discuss Sino-India ties and to dwell upon the NSG issue in particular -- and, all this against the backdrop of the meeting between Modi and Chinese President Xi Jinping at Tashkent later this week on the sidelines of the SCO summit meeting on June 23-24.

From Swaraj's press conference, it is obvious that Jaishankar brought back good tidings from Beijing regarding the NSG issue.

Swaraj exuded optimism that a favorable outcome on India's bid for NSG membership can be within the realms of possibility at the group's forthcoming plenary in Seoul on June 23.

Suffice it to say, we are witnessing a spectacle of breathtakingly creative diplomacy at work, riveted on the firm foundations of the country's 'strategic autonomy.'

Broadly speaking, this is perhaps the first time in a very long while that a creative attempt has been made to 'redefine', 're-interpret', 'restructure', 'reset', or 'adapt' -- call it what you will -- India's non-alignment to the needs and imperatives of the post-Cold War era.

The point is India needs strong relationships alike with the US, Russia and China -- the three major poles in contemporary world politics -- and our diplomacy must aim for a much higher game plan than mere 'hedging' between and amongst the big three powers.

'Hedging' as a foreign policy doctrine came naturally to the timid Manmohan Singh-Montek Ahluwalia-Shivshankar Menon troika that steered foreign policies during the United Progressive Alliance rule, but in reality it was symptomatic of an abysmal vacuity of new thinking in a phenomenally transformative international milieu.

The troika simply could not comprehend that Indian policies didn't have to be burdened with their 'unipolar predicament.'

In plain terms, it is not in India's interests to bandwagon with the US' rebalance in Asia, or to atrophy the profoundly meaningful strategic understanding with Russia for the sake of experimenting with an 'alliance' with the US, or to dilute the prioritisation of building up a relationship of trust and mutual confidence -- and mutual benefit -- with China based on the commonality of medium and long term interests as two emerging powers with similar national aspirations.

Modi understands this -- probably, he understood it all along, but was testing the waters so far.

Hopefully, two years down the road as prime minister, he is now in better command to push his imprimatur on foreign policies.

That, at least, is what one can make out of Swaraj's wide-ranging remarks. Importantly, Swaraj implied two things:

Of course, while saying so, Swaraj was every bit aware that in a very near future, India is going to sit under the SCO canopy with both China and Pakistan (and Russia.)

Paradoxically, the NSG issue has become a sensational context and a defining moment for Indian diplomacy to rework the strategic compass.

Swaraj openly acknowledged China's principled position on the NSG expansion, and, in turn, held out the assurance that India will not have a zero sum mindset as regards Pakistan's membership of the NSG.

Quite obviously, a formidable intellectual challenge lies ahead still in connecting the dots, and, in particular, harnessing the SCO membership to accelerate a normalisation process with China and Pakistan.

The challenge arises from multiple sources.

Clearly, the US will not easily accept a non-aligned India. Being a 'swing State', India's allegiances and plaint attitudes could prove to be a force multiplier for the US' rebalance in Asia, and would indirectly strengthen Washington's containment strategies against Russia and China.

The establishment of the New Delhi branches of Carnegie and Brookings point toward a sustained American attempt on the anvil to dominate the strategic discourses in our country.

On the other hand, the US cannot but appreciate that the 'defining partnership' with India is truly unique insofar as it not only doesn't cost America anything, but is 'self-financing' and ';cost-accounting.'

Put differently, the US is determined to capture the Indian market for both civilian and military exports.

Above all, Asian solidarity is a spectre that haunts the US, as it desperately tries to retain its role as the pre-eminent power in the region.

Indeed, a Russian-Indian-Chinese entente becomes the worst-case scenario. (Western analysts have dubbed SCO as the 'NATO of Asia.)

Without doubt, therefore, the US will pool efforts or try to manipulate various interest groups in India (and in the Indian Diaspora in North America), which for reasons of nationalistic ideology or self-seeking pursuits or sheer comprador mentality and intellectual mendacity, may try to impede Modi's efforts to normalise the ties with Pakistan and China.

To be sure, a keen tussle can be expected in the months ahead on the policy front.

Indeed, with a no-holds-barred election in 2019 looming ahead, there is going to be immense pressure to redeem the pledges in the development agenda. Modi cannot but appreciate that trade and investment with China can make all the difference to his development agenda.

Simply put, Modi's dream of 'India First' can be fulfilled only if the country's external environment remains peaceful.

The good thing is that with the hindsight of experience in diplomacy, Modi holds the levers of power much more confidently than in 2014 when he tried to force the pace of relations with China and Pakistan in the early months of his prime ministership and had to retreat hastily at the sight of the ferocious backlash from the entrenched opponents.

Today, he'd know how to silence the detractor and the frondeur, while the caravan sets rolling.

Ambassador M K Bhadrakumar is one of India's most original thinkers on diplomatic issues.