It is entirely conceivable that Modi began realising at some point that it will be a liability for India if he is seen as Trump's fellow traveller, observes Ambassador M K Bhadrakumar. 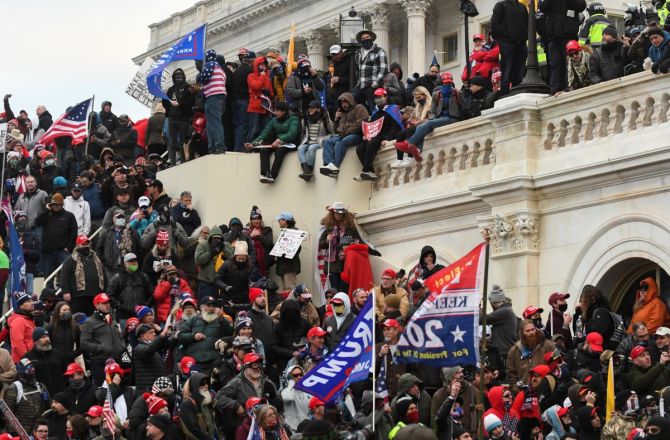 Apropos of the dramatic happenings in Washington, DC, -- with President Donald J Trump's ardent supporters and acolytes ransacking the Capitol on Wednesday -- Prime Minister Narendra Modi has tweeted: 'Distressed to see news about rioting and violence in Washington DC. Orderly and peaceful transfer of power must continue. The democratic process cannot be allowed to be subverted through unlawful protests.'

The careful wording shows that this is not a cavalier articulation of personal opinion, even if it originated from Modi's tweeter handle.

The PM is far too experienced a statesman not to know the import of every word he tweets or speaks.

The tweet breaks a great Indian tradition of several decades.

There is an unwritten, unspoken 'bipartisan consensus' in our country that the maxim of the three wise monkeys in the ancient fable should be scrupulously applied when it comes to anything connected with the United States -- 'see no evil, hear no evil, speak no evil'.

Modi has thrown down the gauntlet at the Congress party.

The timing is significant.

According to reports coming from Colombo, External Affairs Minister S Jaishankar spoke up on Wednesday while on a visit to Sri Lanka in the presence of his counterpart at a joint press conference on the Tamil problem and that country's proposed constitutional reform in regard of abolishing provincial councils.

Conceivably, Modi's tweet was on Jaishankar's advice? We will never know.

Jaishankar's 'virtual' criticism of the Sri Lankan government's policies was, perhaps, a reflection of the failure of his mission to Colombo or more likely made with an eye on the forthcoming election (external link) in Tamil Nadu.

But, in comparison, Modi has aimed at something truly spectacular.

With a single stroke, he has wriggled out of President Trump's tight embrace of him.

Trump recently dared to keep Modi locked in a permanent embrace by conferring on the latter an award for the meritorious service rendered by the Indian government to the US-Indian defining partnership (especially as a major client of American arms vendors) and Indo-Pacific Strategy, and, of course, in reviving the moribund QUAD platform.

However, Trump's ardour for Modi will haunt our national interests during the forthcoming Joe Biden presidency.

No doubt, it was a Himalayan blunder to have staged the Howdy Modi (Houston) and Namaste Trump (Ahmedabad) spectacles.

The government's flawed assessment of the state of play in American politics led it to put all of India's eggs in Trump's basket.

And it badly exposed the naivete of the Indian foreign policy establishment.

Therefore, it is just as well Modi decided to mark a certain distance from Trump's agenda, even if belatedly.

Only yesterday, Jaishankar's American counterpart Mike Pompeo showered fulsome praise on him by tweeting, 'The US-India relationship was made all the stronger with a great diplomat and leader as my friend. Thank you @Jaishankar #HowdyModi #ModiHaitoMumkinHai' IMAGE: An explosion caused by a police munition is seen while Trump's supporters gather at the US Capitol building. Photograph: Leah Millis/Reuters

Honestly, did our hug diplomacy, soap operas and love fest with controversial American politicians serve our country's interests? Within America itself, people regard Pompeo with contempt as one of the worst secretaries of state in the history of that nation.

On the global stage, Pompeo was a spectacular failure in rallying world opinion behind Trump.

The big question is, what is India's convergence with 'Trumpism'? Populism? Unbridled nationalism? Bigotry? Racism? Demagoguery?

It is entirely conceivable that Modi began realising at some point that it will be a liability for India if he is seen as Trump's fellow traveller.

Former president Pranab Mukherjee reportedly wrote in his memoirs that Modi was a quick learner in diplomacy.

At any rate, it does appear that Modi has taken the first available opportunity to put a distance between himself and 'Trumpism'.

He seized with alacrity the mayhem in Washington as just the pretext he needed for a high-profile decoupling from Trump and Trumpism.

But there is a flip side to it.

Modi may also have unwittingly introduced an 'un-Chanakyan' transparency into US-Indian diplomacy.

For, he implicitly acknowledged that US-Indian bonhomie was never really value-based -- that it wasn't even '\"transactional', but is a thoroughly opportunistic enterprise, utterly self-centred.

There could be a touch of cynicism about all this, but it will not be lost on Biden and his team.

Of course, what if the US pays back in the same coin? Our nationalist government will probably resent it.

But then, arguably, our double standards are becoming unsustainable already.

Hopefully, Biden administration will shake off lethargy and point finger at the obnoxious recent 'love jihad' legislation in Lucknow and Bhopal and demand its repeal.

To my mind, every time India lapses back into medieval culture and slinks away from modernity, the US should strongly admonish our ruling elites.

Things have come to such a tragic pass in our country that India's salvation increasingly seems to lie in the admonition and censoring by the international community.

If anyone can make India's elites feel ashamed and make them hang their middle-class heads in shame as regards their bigotry and intolerance and sheer boorishness, it is only the Americans, perhaps.