Thimpu apparently didn't think it necessary to take Delhi into confidence.
Bhutan is loathe to getting dragged into the geopolitical rivalry between India and China.
And for Beijing, this was too good an opportunity to be missed to thumb its nose at the powers-that-be in Delhi, points out Ambassador M K Bhadrakumar. 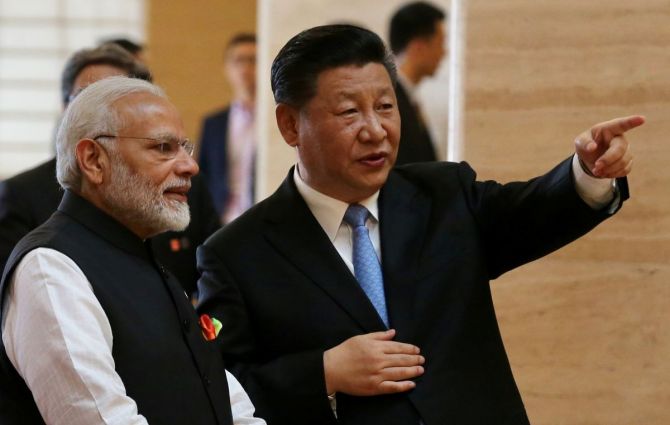 I read a stimulating essay recently co-authored by Paul Dolan, professor at the London School of Economics, and his research assistant Amanda Hedwood analysing, against the backdrop of the uncertainties of the COVID-19 pandemic, how dominant narratives powerfully influence decisions and create the 'narrative trap' in decision-making.

The LSE academics wrote (external link): 'We contend that the failure to step back and consider the impact of narratives will impede effective decision-making by leaving the decision-maker open to unspecified and unrecognised bias.'

'Narratives are not good or bad in themselves, but their ability to make some decisions appear more appealing than others -- often in ways that lie below our conscious awareness -- is detrimental to effective decision-making.'

Any Indian would know that powerful narratives envelop India's deeply troubled relationships with Pakistan and China.

The dominant narratives have become the means through which successive governments strove to assert values and identities.

Yet, fundamentally, these narratives are stories about the way things ought to be.

They may help make decisions easier for leaderships that lack erudition but the consequences of such decisions can be deleterious.

The spurious reasons to act in a particular way in Dokalam in 2017 are a case in point today.

The 'roadmap' signed by Bhutan and China last week towards resolving their longstanding boundary dispute has put a hole through India's Dokalam narrative through which an elephant can pass.

To recap, at Dokalam, the Indian Army crossed into Chinese territory across the settled Sikkim border to thwart the PLA's road building in an area that Bhutan claimed belonged to it.

Indian and Chinese troops withdrew from Dokalam following a 73-day stalemate, but satellite images subsequently showed that the Chinese military infrastructure in the region has now been put on a permanent footing.

But Delhi preferred to look away.

So, what was all that narrative all about -- that Bhutan requested Delhi to come to its defence and India valiantly rose to the occasion and that the denouement to the Dokalam crisis was one of the finest hours of Indian diplomacy, et al?

Are we to conclude that the entire narrative was actually a load of garbage?

Now comes the bombshell of the Memorandum of Understanding on the Three-Step Roadmap for Expediting the Bhutan-China Boundary Negotiations (external link).

Simply put, Bhutan is loathe to getting dragged into the geopolitical rivalry between India and China.

And for Beijing, of course, this was too good an opportunity to be missed to thumb its nose at the powers-that-be in Delhi.

A scathing commentary in CGTN (external link) concluded: 'The biggest lesson of the MoU for New Delhi ought to be that initiatives such as the Quad and anti-China metrics cannot reverse India's growing isolation in South Asia.'

The problem with contrived narratives such as on Dokalam in 2017 is that they can lead to situational blindness, whereby you are so focused on one aspect that you fail to notice the bigger picture.

A similar thing happened exactly two years after Dokalam, when Delhi revoked the autonomy granted to Jammu and Kashmir and thereafter followed it up by issuing a new map of India.

Hardly six monthS later, the Chinese and Indian troops engaged in aggressive melee, face-offs and skirmishes at locations along the India-China border, including in Ladakh.

An impasse has appeared lately and the disengagement process in eastern Ladakh has stalled.

Interestingly, the announcement of the signing of the China-Bhutan MOU comes four days after the 13th round of India-China corps commander level meeting.

To be sure, there is an imperative need for the decision-makers in Delhi to rebalance the impact of their dominant narratives that might have initially enhanced the attractiveness of their decisions.

The proclivity to focus on immediate effects over delayed ones led to a situational blindness.

The heart of the matter is that Indian narratives simply ignore the country's numerous lethal weaknesses.

Consider the following: India just had a precipitous fall in the Global Hunger Index, slipping to 101st position on a list of 116 countries, from the 94th position last year.

Shockingly, India is now behind its neighbours Pakistan, Bangladesh and Nepal.

This news appeared only on Sunday. Yet, a former national security advisor has written on Monday, 'In the longer term, if there is one country which, in terms of its size, population, economic potential, scientific and technical capabilities, can match or even surpass China, it is India.'

The problem with such bluster is almost always that in the long run we are all dead, as John Keynes, the great British economist, once famously pointed out.

To be sure, the Indian narratives, be it on China or Pakistan, need balancing.

Our narratives are far too comforting and alternative stories are needed to challenge them.

The risk lies in the sort of preference for stories we feel confident about -- 'a two-front war under the nuclear shadow'; Quad ('Indo-Pacific strategy'); 'engagement and competition' with China, et al.

The disconnect between our ebullient narratives and the stark Indian reality is no longer possible to hide.

India's decision-makers should demand sense-making counter narratives to protect themselves from the power of one familiar narrative.

Competing narratives will help them to weigh evidence and optimally reach judgments.

Had that been the case, India wouldn't have found itself in the foxhole today following the tumultuous events in Afghanistan.

The mother of all ironies is that the success (or failure) of the current Indian initiative to host an international conference on Afghanistan (external link) in November hinges critically on the acceptance of our invite by the Pakistani national security advisor!

To my mind, Moeed Yusuf will probably come, since Prime Minister Imran Khan is an ardent advocate of dialogue with India.

But then, what happens to our self-serving narrative about Pakistan if we are to collaborate with that country on vital issues of regional security and stability so as to influence the recalcitrant Taliban (read Sirajuddin Haqqani) to rein in terrorist groups?

Conversely, what prevented us from responding to the Pakistani overtures in the recent years while Ashraf Ghani and his clique was ensconced in power in Kabul?

Therefore, we are currently on the job of creating a brand new narrative that India is navigating a 'way to get a seat at the table to decide the future' of Afghanistan.

And this when our decision-makers are not even sure whether anyone of consequence would show up at our conference in November.

Combating a dominant narrative is not easy, but history shows -- be it about Hitler or George W Bush -- that most such stories do not have a happy ending.

On the other hand, as the LSE scholars wrote, they can potentially inflict large-scale costs when the decision-makers allow themselves to be led by their own narratives and get blindsided in 'uncertain and high stakes environments'.