A handsome victory for the BJP in UP would act as confirmation of its recent political choices.
The UP chief minister would be cemented in the popular mind as Mr Modi's chosen heir within the Hindutva fold, and presumably as his successor in New Delhi, observes Mihir S Sharma. 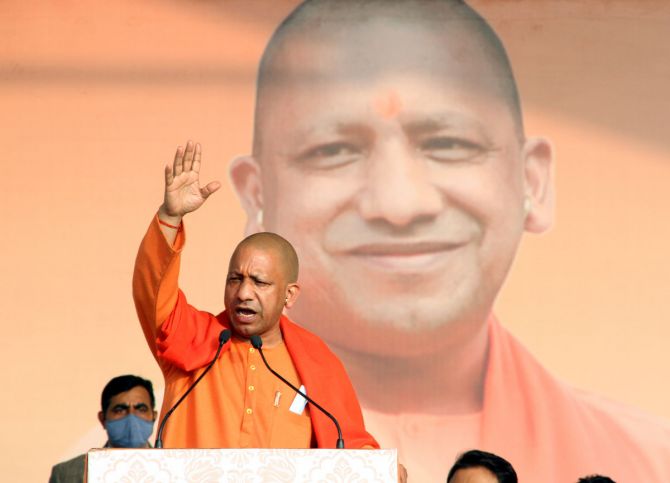 Voting has begun for what may be the most consequential round of assembly elections of Prime Minister Narendra Modi's second term.

The five states going to the polls -- Uttar Pradesh, Punjab, Goa, Uttarakhand, and Manipur -- are all clearly contested.

Opinion polling prior to the elections has been poor and scattered, and state-level polls in India are in any case of relatively poor quality.

But judging by what is known in the public domain, it appears that most political observers are of the opinion that in the states of Punjab, Goa, and Uttarakhand the Congress is more likely to form a government than not; and that in UP the ruling Bharatiya Janata Party is ahead, although its margin may be shrinking.

In UP, the BJP's campaign has run around the merits of 'double-engine sarkar', meaning an administration pulled by the two locomotives of the Modi-led Union government and the Adityanath-led state government.

There are two ways in which this could be read.

It could be read as a statement of confidence in the UP chief minister, raising him almost to the level of the prime minister himself in messaging.

Or it could be read as the opposite -- as the belief that the incumbent state government's record is not enough on its own to assure its re-election.

Yet the larger fact is that, over the past five or so years, the BJP's record in assembly elections has not exactly been in keeping with the undoubted popularity of the Union government and of the prime minister.

It has lost several elections and major states, including in the Hindi belt.

Many of the states in which it is currently in power it managed to sneak in well after negative election results, often by splitting the victorious alliance or party.

This happened in both Karnataka and in Madhya Pradesh, where the BJP initially lost its majority in assembly elections in 2018, only to return to office following political turmoil in 2019 and 2020, respectively.

In Bihar, where it returned to power in coalition with the Janata Dal-United, it saw its vote share dip by almost five percentage points -- though that might have been because of adverse alliance arithmetic.

The prime minister's position and the BJP's 'no alternative' messaging have survived multiple defeats and setbacks in state-level elections.

It will no doubt also survive losing Goa and Uttarakhand and a return of the Congress in Punjab.

But the plain fact is that Uttar Pradesh is another matter entirely. 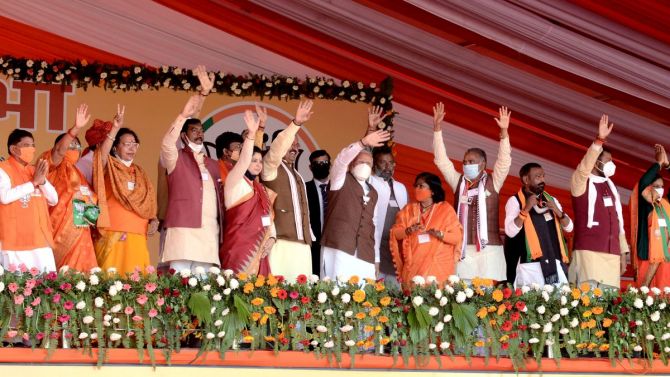 Mr Modi's two back-to-back parliamentary majorities have been built upon the BJP's strength in Uttar Pradesh and its 80 parliamentary constituencies.

The party's turn towards more radical messaging in state-level and local-level activism has also been enhanced since it swept UP five years ago and the chief minister's chair was handed to a monk-politician known till then mainly for his divisive rhetoric.

That moment was defining, in that it represented a decisive break in terms of rhetoric and personnel from the more inclusive image that Mr Modi had sought to present for his party prior to the 2014 election.

This was a risky decision; it is also worth noting that the UP chief minister is the only one of his BJP peers who has been allowed to develop a national-level persona and been presented as a major campaigner for the party in other states.

A narrow victory -- or a defeat, though that seems very unlikely at this point -- for the BJP in UP would reasonably poke holes both in the 'invincibility' message of the BJP in the run-up to 2024, but also in the theory that increasing radicalism is the best way to retain power.

On the other hand, a handsome victory for the ruling party in UP would act as confirmation of its recent political choices.

The UP chief minister would be cemented in the popular mind as Mr Modi's chosen heir within the Hindutva fold, and presumably as his successor in New Delhi.

The amped-up communal rhetoric of the last couple of years would have been proved to have paid electoral dividends, and the leadership will be even less likely to clamp down upon it.

Remember, demonetisation was killed as an electoral issue by the last UP election; a victory this time around would serve to legitimise the even more muscular form of religio-political mobilisation associated with the UP wing of the BJP.

Thus, a great deal rides on these elections, not only for the prime minister, but also in terms of the choices that India's dominant party will make over the next five years.

What is certain is that the centrality of UP to India's political story has been confirmed.