If the government had paid enough to begin with, or if it had made serious advance purchase commitments that allowed the vaccine producers to mobilise necessary investment, then it is possible to imagine more free or subsidised vaccines such as are available in developed economies, asserts Mihir S Sharma. 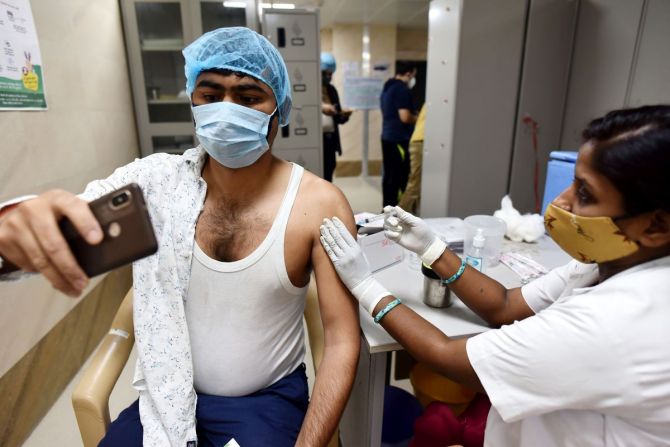 Many months later than would have been wise, the Union Cabinet has taken steps to increase the supply of vaccines.

Recently, it announced a new set of regulations governing the third phase of the vaccine rollout.

These included the opening up of the private market in vaccines; allowing state governments to purchase vaccines directly; and allowing all those above 18 access to vaccines through channels other than the existing one supervised by the Union government.

That channel will have the right to half the vaccines produced, and it will pay the concessional rate that had earlier been agreed upon between the government and the two vaccine producers, Bharat Biotech and the Serum Institute of India.

It will continue to be open to all those above 45.

It is unfortunate that it took the explosive second wave of the pandemic within the country, which is now ravaging Delhi and the north and threatening many other states, to force the government's hand. Even so, it is welcome news.

This move has, however, been attacked by several stakeholders, including the leading Opposition parties. It is important to try and disentangle what aspects of their criticism are fair and what is mistaken.

There are good reasons to suppose, for one, that the opening up of purchases to states is a clever political ploy rather than a well thought out plan.

The Union government's political reaction to the raging second wave has been to dump responsibility for it on the states.

Shortly it will also be able to say that state governments that are not buying vaccines are the problem, thereby evading accountability for its failure to enable the production or manage the purchase of enough vaccines for a speedy rollout.

Meanwhile, federal tensions will escalate. Some states will find themselves short of money, and, unlike the Union, will not be easily able to tap the capital markets.

Other states will seek to strong-arm vaccine producers or even waylay shipments of completed vaccines.

This anarchy has already been observed when it comes to the production and transport of medical oxygen, and the Union government has let it happen for whatever reason.

It would be far better for the Union to up its own purchase of vaccines, if necessary at a higher price, and distribute the additional sum between states with a transparent and public formula.

If that logical formula has not been followed, then most believe the only reasons could be political. If so, it is unfortunate that, even at this stage in the pandemic, such calculations are still influencing policy.

That said, the arguments being made by the Opposition and others against the private market also do not stand up to scrutiny.

Many have argued that most other countries do not have a private market for vaccines, and all of them are available free.

But these arguments cannot be applied to India today.

First of all, there is the problem of past actions by the government.

If the government had paid enough to begin with, or if it had made serious advance purchase commitments that allowed the vaccine producers to mobilise necessary investment, then it is possible to imagine more free or subsidised vaccines such as are available in developed economies.

But that ship has now sailed.

The other problem is that it is necessary to develop a remunerative private market in order to supplement the vaccination capacity built up by the government. This is already creaking under the strain.

Private health care must come to the rescue, and it will only do so at scale if it is not a money-losing enterprise.

In other words, a low, standardised, but sufficiently profitable price must be set. This is what has happened.

It is hard to logically maintain that the private producers are price gougers under the current situation.

Serum Institute of India, for example, has put a reasonable amount of its own money into untried vaccines early on, and has not concealed the fact from the beginning that it needs to make a margin on a section of its production if it is to scale up production further.

While it is necessary to ensure that nobody is making a killing from the pandemic, that hardly seems to be the case here.

A significant component of the criticism is likely political, to further the narrative built up in the past years that the government is too close to crony capitalists.

Yet in this case, the political rhetoric may be dangerous for the vaccine effort going forward.

It is reminiscent of the vicious attacks globally on AstraZeneca, the company that conducted the trials for and has licensed the Oxford vaccine.

The company committed to make no profits off the vaccine for the duration of the pandemic, and to manage the scale-up across the developing world.

While this has been slower than hoped, there is no question that the expertise it provides essentially free is essential. Yet this has hurt the company deeply.

As one Bloomberg story reported: 'Many people inside Astra are deeply distressed by the extent of the criticism they've taken while trying to lead the way to a non-profit vaccine that could help end the pandemic. As one executive puts it when asked if they'd do it again: "Not in a million years. All we've had is grief".'

This is a deeply disturbing message to go out when we are still in the middle of a pandemic, and many more companies will need to be enlisted in the fight against COVID-19 across the world.

The private sector is never a sympathetic actor, especially at a time when national and global solidarity is called for.

And it is also true that, in many parts of the world -- though not significantly in India -- public investment in basic research has helped power the race to successful vaccines.

But for scale-up in areas where the State is weak, resource-constrained, or absent, cooperation with the private sector is essential.

This cooperation will not take place if the private sector is bullied, expropriated, or deprived of an expectation of reasonable but nor excessive return.

The government must stand firm in its defence of the market channel for vaccines, and it should also assure additional vaccine producers that it will defend their entry into the market as well.

Criticism of vaccine access should not be directed at the companies making the vaccines, but at the policy makers who failed to take the decisions in time that would have enabled a larger, cheaper roll-out across the nation.

Mihir S Sharma is head of the Economy and Growth Programme at the Observer Research Foundation, New Delhi.