According personhood to the Ganga and Yamuna is probably the best way to ensure the protection of natural resources, says Arundhuti Dasgupta.
Illustration: Dominic Xavier/Rediff.com 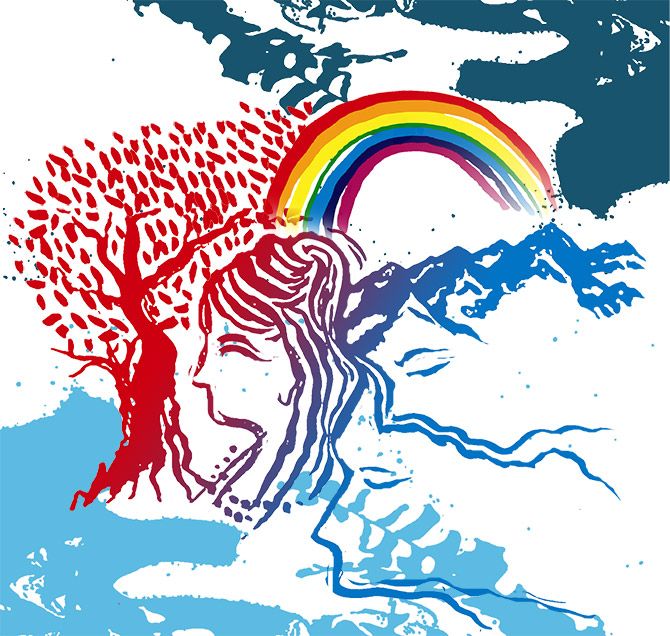 When the Uttarakhand high court accorded the status of personhood to the Ganga and the Yamuna and appointed a spokesperson on their behalf, it bracketed India with countries such as Ecuador and New Zealand -- both nations have given citizenship rights to not just their rivers, but also forests and parks.

This is probably the best way to ensure the protection of natural resources in the times in which we live, it marks a new relationship between nature and man where the protector-destroyer is now the protected.

In myth and legend, Ganga is the river that cleansed, purified and soothed human souls.

Her descent from the heavens, into Shiva's matted locks and then on to the earth is well known.

As she was released from the heavens, Ganga is considered the nectar of the gods or amrita.

She is also unruly and unpredictable and easily annoyed.

Yamuna is the sister of the god of death, Yama, and the two are often portrayed as the first man and woman from whom all races emerged.

Yama and Yamuna are twins born to sun god Surya and his wife Saranyu.

There is an elaborate story that talks about how Saranyu ran away because she could not bear sun's fierce light. Her children were ill-treated by her shadow that she had left behind as a substitute wife.

When Surya discovered the treachery, he chased her across the skies until he brought her back home, depending on the version that is told, or did not (after sufficient twists and turns).

The point is that in these stories, the sun, the rivers and the mountains were living guardian gods.

The New Zealand court order helps understand the underlying philosophy of the Maoris that led to the judgment. It said that the Maoris believe 'I am the river and the river is me.'

According to Maori myths, protective deities called tanihwa live in pools, lakes, caves and oceans. They are in charge of earth's treasures and are feared and worshipped at the same time.

From resident spirits to guardian spirits to all-purifying goddesses, the role of the river has morphed many times.

Ganga and the Yamuna are part of a web of seven rivers stretched across the region.

The Ganga, most potent and powerful among the seven, is seen not just as one river.

In the Puranas and other ancient texts, it is synonymous with nearly every river, lake, pond and rivulet that flows in the subcontinent.

The myths create a network of hidden tunnels and underground channels that connects the Ganga to almost every part of the country.

In the South, for instance, all temple tanks are called the Shiva Ganga writes Diana L Eck (India, A Sacred Geography).

In Eastern India, in Orissa in a town called Biraja, there is a well that is said to be connected through an underground channel to the Ganga at Kashi.

By making the sacred rivers a part of every water body was likely a way of ensuring that they were cared for by the people who lived around them.

Rivers are demonic, wilful creatures too.

In the Sumerian flood myth, the Tigris and the Euphrates rivers do the bidding of the higher gods bringing drought, famine and then flood to the people who had grown too numerous and too noisy.

The god Enlil orders the destruction of the human race through the rivers.

Among Vedic myths, Vritra is a large serpent that contains all the waters of the universe.

The slaying of Vritra by Indra is a dominant theme in the Rig Veda where the battle between the two is described in great lyrical detail.

Indra's victory leads to the world being restored to life by the life-giving waters. (Many texts link the rivers that criss-cross the subcontinent to these waters and call them amrita, the nectar of the gods)

It is not just rivers that find a place in the pantheon of Vedic gods, forests and mountains do too.

The concept of sacred groves, common to all ancient civilisations, personifies the forest god/goddess.

In India, sacred groves are called devrais, a designated spot deep inside the forest where all that grows belongs to the god resident therein.

Fruits, flowers, herbs -- the people have no rights over the produce that grows in a devrai.

However, many sacred groves across the country are under threat from extractive industries and politicians.

Perhaps the court should turn their attention to the receding tree lines across the country and give them a voice too.