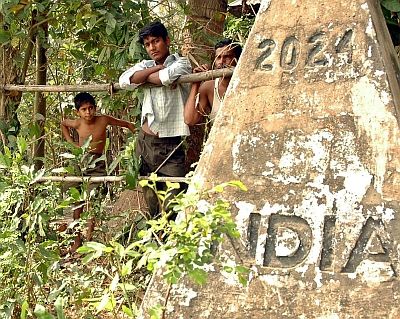 In the light of the global scenario on infiltration for economic gain what Modi said in his speeches in Assam and West Bengal recently was perfectly legitimate. Intellectual dishonesty marks this discourse in our country, argues Ram Madhav.

The issue of Bangladeshi infiltrators is a vexed one. It evokes sharp reactions every time some reference is made to it by any leader. This time too when Narendra Modi, the Bharatiya Janata Party's prime ministerial candidate, raised this issue during the election campaign scorn was poured on him.

Mamata Banerjee and some other political leaders on one side and Left and other intellectuals on the other have issued strong statements censuring Modi's views. While Mamata declared that she would protect and safeguard the interests of each and every infiltrator, the intellectuals called Modi's statement a grave danger to the minorities in India.

'Apart from the sheer inhumanity of the remark, we fear that in a country in which every citizen does not possess documentary proof of citizenship, such a move would simply cause a general victimisation of persons belonging to that particular religious community,' the intellectuals averred in a statement released to the media.

Let us examine the facts first. That a large number of illegal migrants enter India from across the porous Bangladesh border is a well-known fact. Successive governments in New Delhi have acknowledged this phenomenon. Senior Communist leader Indrajit Gupta made a statement as Union home minister in 1996 stating that over one crore (10 million) illegal migrants have entered India from Bangladesh. These illegal migrants, or infiltrators, have become a major source of conflict and resentment in the north-east.

The All Assam Students Union movement that had rattled Assam in the early 1980s was a movement against these infiltrators. Estimates vary, but they all put the numbers of these infiltrators above two crore (20 million). Assam and West Bengal bear the major brunt of these infiltrators. They affect the economy of these states and also the livelihood of the ordinary and poor people, thus causing major resentment and leading to severe unrest, of the kind being witnessed in the Bodo areas of Assam of late.

However, there is a small section of these migrants who cross over into India not for any economic reasons but due to extreme religious persecution in Bangladesh. Almost all of them are minority Hindus and Buddhists -- the Chakmas of the Chittagong Hills. Occasionally someone like a Taslima Nasreen too may become a target of religious persecution and seek refuge in India.

Globally, a distinction is made between the economic infiltrators, namely those who sneak into another country for economic reasons like jobs, livelihood etc without proper documents, and those who come seeking asylum.

Even in the most liberal countries of the European Union and in the US immigration laws clearly prohibit infiltration for economic reasons. The European Union has recently passed a law calling for incarceration of illegal migrants. The central point in the directive was a provision in which illegals that refuse to go back can be detained for up to 18 months and then deported -- with a ban on them from re-entering the EU for five years. It doesn't apply to asylum-seekers though.

The US too faces a serious dilemma over illegal migrants from Latin American countries, especially Mexico. An estimated 12 million illegal immigrants have made the US their home today, and half of them are from Mexico alone. In fact some of the Mexican states on the US border like Yucatan encourage illegal migration by providing information about how to survive, where to get medical aid, how to get children into the education system etc through books, DVDs etc. The Mexican constitution grants its citizens freedom to cross its borders.

With a vociferous liberal intelligentsia around, the US government has been struggling with the problem of how to handle this illegal migration. It used the 1993 New York World Trade Centre bombings as an excuse to bring in the Illegal Immigration Reform and Immigrant Responsibility Act. The Patriot Act promulgated in the wake of the 9/11 terrorist attacks is another legislation that addresses the issue of illegal migration.

Under the Patriot Act, the attorney general was granted the power to 'certify' illegal immigrants based on the grounds that they pose a threat to national security. Once an illegal immigrant is certified they must be taken into custody and face mandatory detention which will result in a criminal charge or release.

Even predominantly Muslim countries like Malaysia and Saudi Arabia have in the recent past thrown out illegal immigrants, most of whom are their co-religionists coming from countries like Pakistan, Bangladesh and India.

In the light of this global scenario on infiltrations for economic gain what Modi said in his speeches in Assam and West Bengal recently was perfectly legitimate. Intellectual dishonesty marks the discourse in our country. Modi was equated with certain ultra-right parties in Europe for arguing that infiltrators cause economic hardships to the locals whereas the world over immigrant laws prohibit illegal migration precisely for the same reason, besides, of course, the security concerns.

In a landmark judgement on July 12, 2005, the Supreme Court, while ordering for the repeal of the controversial Illegal Migrants (Determination by Tribunal) Act in Assam, had made several pertinent observations regarding the Bangladeshi infiltrators.

'The influx of Bangladeshi nationals who have illegally migrated into Assam pose a threat to the integrity and security of north-eastern region. Their presence has changed the demographic character of that region and the local people of Assam have been reduced to a status of minority in certain districts,' the court observed. It also added that 'the foremost duty of the central government (is) to protect its borders and prevent trespass by foreign nationals.'

Also on the issue of the deportation of these infiltrators, the court was categorical. 'The Bangladeshi nationals who have illegally crossed the border and have trespassed into Assam or are living in other parts of the country have no legal right of any kind to remain in India and they are liable to be deported,' the learned judges stated.

Modi too was perhaps suggesting the same. It is dubious to caricature it as 'inhuman' or 'against the minority community'. His reference to Hindus as 'persecuted asylum-seekers' is based on the historical experience with both Bangladesh and Pakistan. Of course, India has always been a safe haven for all sorts of persecuted people, be it the Jews or the Parsis or the Tibetan and Burmese Buddhists. Wu Nu, the Burmese general, lived in India in exile for several decades. The Dalai Lama and his people have been here for more than five decades.

Even persecuted liberals like Nasreen found safe asylum in India. It may not be out of place to mention here that the very same people who are attacking Modi for differentiating between the infiltrators and asylum-seekers were the ones who had thrown out Nasreen from Kolkata and never championed the cause of her human rights.

Image: Bangladesh residents watch as Indian officials prepare to build a fence on the border in Tripura in 2006. Photograph: Jayanta Dey/Reuters 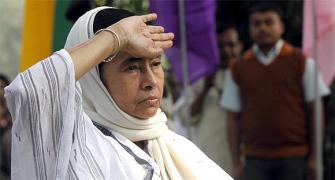 Modi hits back at Mamata, says real tiger will never save scamsters 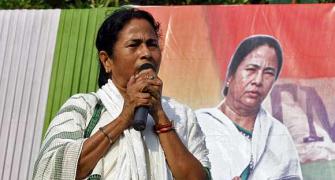 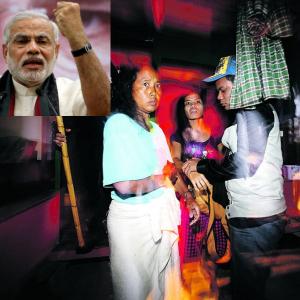 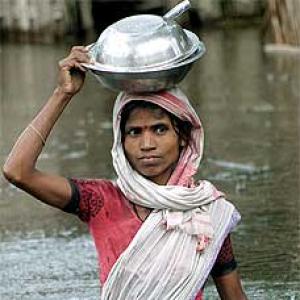