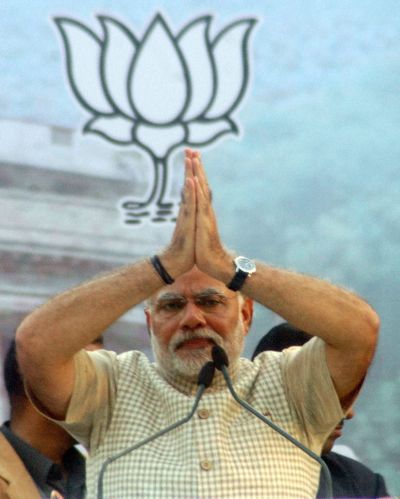 The problem with all electoral waves is that pundits get wise to their existence only after the ballots are counted and the winners declared. This one is no different.

Yes, we knew that the Narendra Modi-led Bharatiya Janata Party was on course to emerge as the single largest party. You did not have to be a rocket scientist to figure that out. Even the losers in their heart of hearts must have been aware of the coming drubbing. If they were not, well, it would only reveal their naivety, their disconnect from the voters.

But the sheer depth and breadth of the BJP's victory is mind-boggling. The party has won even where it had no footprint. It has polled more votes in some states where hitherto it was a minor player, than the established regional parties.

Whether it is in Kerala or in Tamil Nadu or Seemandhra or Telangana, regardless of the seats, the vote-share of the BJP and its allies underlines the clearest message of Verdict 2014.

There was a Modi tsunami all through the country.

In fact, the BJP was secondary in the great electoral joust. For the voter, all that seemed to matter was Modi, the development protagonist from Gujarat. Whether it was the illiterate farmer in the innards of Uttar Pradesh or Bihar, or the educated but unemployed youth in Hyderabad or Chennai, the Gujarat model beckoned him towards the lotus sign on the EVM.

Now, critics can split hair on the worthiness or otherwise of the Gujarat model, but the ordinary voters have bought into it in a very big way. Otherwise, there is no way anyone can explain a clear majority for the BJP on its own. And that is where the real nub of Election 2014 lies.

For, the voters have great expectations from Modi. They want him to deliver. Indeed, they want him to replicate the Gujarat model at the national level.

There is a huge hunger for Bijli, Sadak, Paani in every nook and cranny of India. And the voter in all parts of the country believes that Modi would strive to provide the barest essentials of decent life. Such a huge burden of expectations from one man can pose a most forbidding challenge to the new prime minister.

Modi's sincerity and commitment to provide good governance is not in doubt. But he will have to grapple with the accumulated mess of the last 10 years, the inbuilt resistance of the 'system' against efficient delivery, the entrenched vested interests, the creepiness of the Delhi durbar to corrupt all wielders of power and, above all, the ill-tempered obstructionism of the losers of 2014.

Given will and determination, the task he has taken in hand to renew and re-energise India is not unattainable. People do not expect miracles. They want a guarantee of good intentions and a sincere and serious effort to lift them from the morass of neglect and poverty. They want the growth rate to pick up so that there can be a million more jobs every month. They want far less or no corruption so that funds meant for infrastructure projects, for welfare schemes, etc, are not stolen.

Since even his worst critics have not accused him of being personally corrupt -- the only trait he has in common with that Mauni Baba, Manmohan Singh -- half the battle against corruption will be won the day he takes over as prime minister. The other half can be won by choosing his ministerial team most carefully.

Do not give in to the pressure of the old and the decrepit in the BJP. India of the 21st century needs to be spared the obscurantism of 19th century politicians like Murli Manohar Joshi and Giriraj Kishore. The young, aspirational, voter wants a forward-looking Cabinet. Whether it is in foreign policy or in the economic sphere, the only guiding principle ought to be India First.

Also, Modi was careful to stress that he would give an inclusive government. He should debunk the vicious propaganda that he is anti-minority through his actions. Reassure the minority community, offer them the salve of development, the same development which is offered to the majority community. The voter has most effectively rejected the Congress campaign of vilification and calumny against Modi.

Modi can afford to be generous and forgiving in his hour of triumph. Leave the Gandhis alone. If the mother and son could not even bring themselves up to name him while most sullenly conceding defeat in an all-too-brief scripted statement, it only revealed their imperial mindset. The devastating defeat has failed to impart a modicum of humility to their conduct.

Nor has the sycophantic caboodle that surrounds them shown any sign to break free from the clutches of the Family. But that cannot be Modi's problem. Governance is. Kick-start the economic engine. The mess left behind by P Chidambaram, despite that spurious claim about the low-hanging fruits of the economy, will take time to be cleared.

But so long as Modi is able to convince the nation that he is trying, trying his best, and is on the right track, the people will allow him a long honeymoon.

He should make the best of that period to take some big-bang decisions and implement them without let or hindrance. A stable and strong government should necessarily mean a correct and bipartisan government. No personal agendas, no divisive ideas and ideologies, no crony capitalist interests ought to intrude into Project India First.

Let national interest alone be his guiding principle. That will be the true import of Mandate 2014.

Image: Narendra Modi addresses his constituents in Vadodara on Friday soon after the election results made it clear that the BJP was heading for a majority of its own. Photograph: PTI Photo. 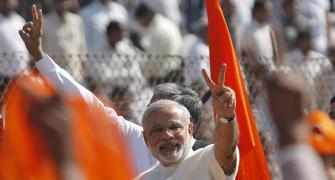 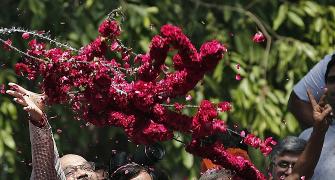 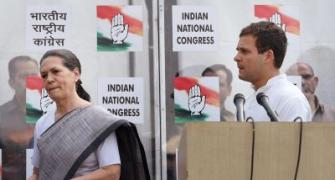 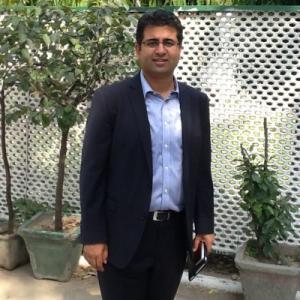 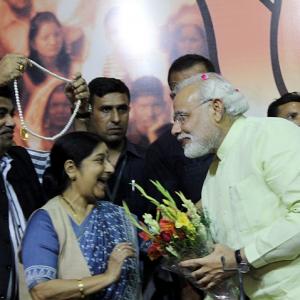