Sheela says: Is the Congress's diagnosis and cure all wrong? 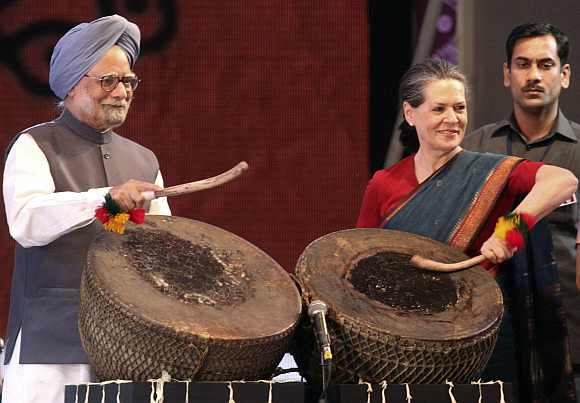 In the last 10 years, when the people looked at New Delhi, they saw two centres of power and not one decisive leader between them. There was nobody who could speak in a language people wanted to hear.

Rediff.com's Sheela Bhatt reveals the true reason why the UPA appears rudderless on the eve of Election 2014.

Sometimes, in the heat and dust of an election campaign, we tend to drift with the wind. We buy rhetoric without pausing to think. Sometimes our political leaders think we have not just short-term memory, but also that we suffer from amnesia.

We read recently Congress leaders one after the other coming out with their diagnosis of the grand old party's problems.

All of them, from different platforms, claimed that Prime Minister Manmohan Singh had not failed, it was the government's failure in 'communicating its achievements'.

When asked, in Bangalore, why the United Progressive Alliance has failed, Sam Pitroda said, 'I think certainly we could have been more aggressive in conveying our achievements. As I said, we have done transformatory work. We could always be better in communication.'

'The Congress party has clearly failed to communicate to the people its achievements,' Pitroda added. 'For eight years, we gave over eight percent average economic growth, transformed education... It was not an easy job, certainly it was great but we lost the message.'

Commerce Minister Anand Sharma said the 'senior leadership' in the Manmohan Singh government 'failed to have a dialogue with the people of the country on its achievements.'

Kerala Chief Minister Oomen Chandy said, 'We should have taken advantage on the basis of actions taken by us on corruption. The Congress should not have gone on the defensive on the issue. We should have gone on the offensive....We did everything (to punish the corrupt). But in communicating this there may have been a weakness.'

Similar views have been expressed by Congress President Sonia Gandhi, its Vice- President Rahul Gandhi and other senior ministers.

One would like to remind the Congress party that its problems did not begin with 'lack of communication'. The UPA's failure -- or as they like to say, 'the perceived failure of the UPA' -- is because of far more serious reasons than this argument that the UPA is 'lacking in the art of communication.'

When more and more Indians are literate, watch news television channels, read newspapers, have a mobile phone and exploit its maximum benefits, Congressmen have to be either arrogant or ill-informed to think that their 'achievements' are still unknown to the people.

One would like to tell the Congress, your diagnosis is all wrong, so the cure is likely to fail.

The Congress's connection with its support base started weakening because of the spectacular failure of the UPA and the party in providing a strong, visible and cohesive leader who could communicate with the entire nation from time to time in a compassionate manner.

Sonia Gandhi's leadership is a successful case of political choreography, but she didn't intend to fit the bill as Indira Gandhi did or even as her husband tried.

In the last 10 years, when the people looked at New Delhi, they saw two centres of power and not one decisive leader between them.

There was nobody who could move and shake babu-dom and speak in a bhasha the people wanted to hear.

t will not be wrong to claim that from 2004 to 2014, Dr Manmohan Singh has been a leader who was not allowed to be the 'popular leader' because the party, 2004 onwards, had its own objective to project Rahul Gandhi as the lone Congress leader at the top. Obviously, Sonia Gandhi was keeping the seat warm for her son.

When things started happening in fast-forward mode there was nobody at the highest level speaking with the awesome power of the Prime Minister's Office.

Also, for any government, the need for communication obviously exists, but the language of communication is more important. Correct bhasha is a leader's only weapon to communicate achievements.

The Congress's woes are not about insufficient communication, it is the absence of bhasha that has failed the party.

When Mumbai was under siege in November 2008, neither Dr Singh or Sonia Gandhi touched a chord with the people in identifying with that horrible sinking feeling.

When the young girl was raped on a moving bus in New Delhi in December 2012, Rahul Gandhi didn't speak in our bhasha.

When price rise was killing the dreams of the aam aadmi after a global meltdown it was Arvind Kejriwal who spoke the correct bhasha, using apt phrases and proper grammar.

The Congress is absolutely correct when it criticises the Gujarat model. There is not an iota of doubt that Gujaratis also suffer from corruption. Gujaratis bribe to get 'sat bara na utara (property ownership papers)', but still they vote for Chief Minister Modi because unlike Manmohan Singh, Modi and the BJP at all levels within the state keep speaking in the people's bhasha so they don't remain clueless.

The Congress party made Dr Singh prime minister with a caveat to remain the CEO and not the mass leader. Sonia Gandhi bloomed from 1998 onwards to transform into a nationally acceptable Indian leader in a highly choreographed manner.

She spoke only when she thought it fit. She spoke in minuscule measures and she took care to not expose herself by taking care of the sensitivities of a cross-section of society due to the in-built limitation of her leadership.

There are a few other serious reasons the behind the UPA's anti-incumbency, more overriding than this weak and even cleverly misleading excuse of 'failure in communicating achievements' held out by the Congress and UPA. The vacuum of leadership for the last 10 years is telling. 'Hamara pradhan mantri' has been missing for the Indian masses.

The UPA had self-imposed constraints.

Very few critics highlight the serious cracks within the Union Cabinet that ruled India for the last 10 years. The serious differences of attitude to issues of national importance between Dr Singh and A K Antony have not been debated enough.

Much more serious and highly intriguing was the undeclared political war between P Chidambaram and Pranab Mukherjee that damaged the government from within. Even the corruption virus is a manifestation of the divide within.

Equally mystifying has been the attitude of 10, Janpath, in not putting a stop to these political hostilities. It has affected in many different ways the UPA's governance capabilities and the final outcome.

The people would have not overplayed the UPA's corruption (as they are doing in Gujarat and the rest of India), but lack of coherent leadership is what puts off people.

This whole idea of keeping Rahul Gandhi at the safest distance from the UPA government has failed the UPA itself. It is possible that the voters, who are not very enamoured of the BJP or its PM candidate, don't buy this hypocrisy as well, anymore.

Many Congress supporters wonder why, in the world of Indian politics, the BJPwallahs are so much better at public persuasion than the Congress-wallahs, or why the Congress is so slow or inept in responding to the BJP's rhetoric, or in winning public recognition for their accomplishments.

The likely answer is that it is so because in every little thing the Congress has to first create a suraksha chakra (security ring) around the Gandhis and then talk about the party and then about the UPA government.

This sequence can't be changed because the Congress's growth after Independence has centred around the Gandhi-Nehru family, except for brief periods.

This tough political task of keeping the Gandhis above everyone makes the communication strategy complex. Also, if you read the fine print, Modi in his home turf is not at all 'communicating achievements'. Modi's confidant Amit Shah's favourite punch line is 'Vikas vote na de, majboot neta de (Development doesn't get votes, strong leadership does)'.

It is time to contest the Congress's over-hyped diagnosis of woes that the party is going through.

Sometimes when your achievements are a mixed bag (which will be ALWAYS be the case in any developing region), clear communication may not be the real strength of a government because the statistics of tasks-not-done will be always starker than actual achievements.

Given that Modi, in spite of facing huge limitations due to the blot of the 2002 riots and in view of the attacks within the party and outside against him, is coming closer than ever in his attempt to fill the vacuum in New Delhi, it is time the Congress redo its math.

Who, what, why, when and how was this dangerous vacuum in leadership created?

Is it only due to not communicating the UPA's achievements? Really?

Yesterday, Sheela said: He served tea, I am a mason, says the man facing Modi at home

On Wedneday, Sheela said: When the Gandhi family played too safe

On Tuesday, Sheela said: Priyanka is chief of staff in Rahul's office

On Monday, Sheela said: Why Modi had to get rid of Harin Pathak

Did the UPA fail to communicate its achievements? Vote below!