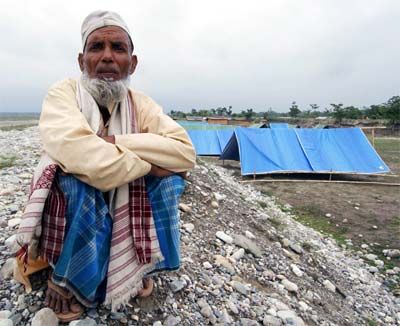 In a staggeringly heterogeneous society of Assam, where no ethnic community is anywhere close to a decent fraction of majority in the state, successive Congress governments have turned the state into a powder keg by cynically pampering the politics of ethno-nationalism.

The result is, the state is a simmering communal cauldron that sporadically erupts at the slightest real or imagined provocation, says R N Ravi.

The recent bouts of violence by suspected Bodo militias that killed over 30 hapless Muslims, mostly children and women, and rendered several thousands homeless in lower Assam recently, once again offers a shocking glimpse of the horrendous game of violent communalism being played by the Congress government of Assam in furtherance of its cynical power politics for the last several years.

In all these wanton killings, the shocking reality is the fact that the perpetrators have enjoyed the unflinching patronage of the Congress-led state governments.

Notwithstanding cynical attempts by certain politicians -- Omar Abdullah, chief minister of Jammu and Kashmir taking the lead followed by the chorus boys of the Congress party -- to wield this staggering human tragedy to their political advantage by lambasting their pet peeve Narendra Modi, the prime ministerial candidate of the BJP, the grim reality is otherwise.

The region has suffered several bouts of massive killings and arson targeted against the non-Bodos since 1993. The Congress party has been in power whenever such massacres took place.

In a staggeringly heterogeneous society of Assam, where no ethnic community is anywhere close to a decent fraction of majority in the state, successive Congress governments have turned the state into a powder keg by cynically pampering the politics of ethno-nationalism, encouraging political mobilisation along community lines and rewarding them with exclusive political, administrative and financial gains, often at the expense of other communities sharing the same habitat.

In Bodoland area such mass killings have been orchestrated and prosecuted invariably by the Bodo militias with little involvement of the communities.

Bodo militias do not brook any challenge to Bodo hegemony. Even a credible show of resistance is met with severe punitive reprisals.

The recent carnage is one such episode of reprisals against the Muslims who are suspected to have defied the diktat of the militia and voted in the recently held Lok Sabha elections against the candidate of the Bodoland Peoples Front that rules the Bodoland Territorial Council and is a coalition partner of the Congress in running the state government.

The carnage began soon after a senior BPF leader publicly reprimanded the Muslims for not voting for its candidate.

Although the-eye witnesses point at the BPF militia for the recent killings, the government agencies have blamed it on a renegade faction of the National Democratic Front of Boroland, a Bodo militia engaged by the state in peace talks.

Either way, it was an act of terror by the Bodo militias.

There are certain incontrovertible facts about the recent carnage in Assam. These are:

This Bodo militia has killed over 1,500 people in several sporadic or organised violence since then. Some of its major terrorist attacks included the serial blasts on October 30, 2008, that ripped through entire lower Assam killing over 100 innocent people and maiming over 500 and catapulted Assam on the global terrorism map.

Yet the state government, instead of reining it in, continued pampering it under the fiction that some odd faction of the outfit was responsible for these attacks while the main body of it was largely 'well-behaved'.

The state government keeps soliciting the renegade factions from time to time and new renegades keep surfacing. The vile and vicious circle of violence continues unabated.

The NDFB has been nurtured by the state with military and financial patronage since 2005, when it gave a disingenuous undertaking of good behaviour. Shielded from the military pressure of the state, its heavily armed cadres carry out rampant extortions and intimidations for political and commercial gains.

They summarily remove any resistance to their writs by demonstrative killings. They control contracts for government works and dominate the lucrative trade in legal and illicit forest assets.

Besides, the government gives them hefty cash every month in the guise of maintenance of their cadres and sustenance of 'political' activities of their leaders.

Assiduously cultivated perception of insurgency and mischievously contrived fiction of factionalism among militias have rendered the scenario murky. Any discourse on organised violence in Assam tends to slide into issues of identity and ownership of land and its resources. The catalytic role of the state is seldom brought under the lens.

The Congress party follows a paradigm of peace in which it cynically solicits a militia group into talking peace and flaunts it to the people as its measure of political achievement.

The militias find the solicitation lucrative as it comes to them without any strings attached. They are allowed to retain their military hardware and continue their military operations with a rider that they must not attack the security forces.

In this paradigm of peace the militias and the security forces of the state are at mutual peace while the people remain at the receiving end of the both.

Image: A victim of the recent violence against Muslims in Assam takes refuge in a relief camp in Narayanguri village. Photograph: Utpal Baruah/Reuters.

R N Ravi, a retired special director of the Intelligence Bureau, dealt with the North-East for 25 years.