Despite all the swirling speculation over his political entry, indications are that actor Vijay may follow in Rajinikanth’s footsteps of letting his films talk politics as long as possible and decide on his direct entry on a later day, says N Sathiya Moorthy. 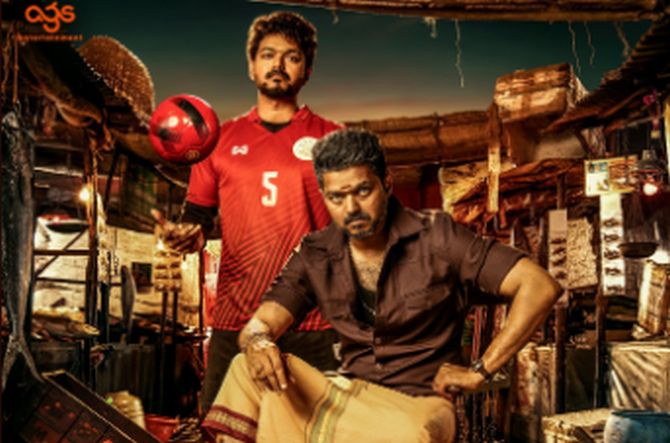 At a time when the Centre is conferring the newly-instituted ‘Icon’ award on Tamil cinema’s superstar Rajinikanth, yet another superstar is emerging in Kollywood.

Vijay, Rajini’s worthy successor to the ‘superstar’ title, has earned every bit of it, by dint of hard work and dedication, through sheer re-packaging of a similar storyline that had once made him a moderate success first and later a near-total disaster.

The Centre has chosen Rajini as the recipient of the honour, the ‘Icon of the Golden Jubilee’ at the India International Film Festival (IIFF-2019). It’s a well-deserved recognition, given that even though his films used to release once every two or three years, and despite some like Baba (2002), Kochchadaiyaan and Lingaa (both 2014) bombing, Rajini has continued to rule the box-office through three decades.

Time was when the social media critics would pan him for doing the ‘same role’ in 10 films while veteran Kamal Hassan was playing ten different roles in the same film (Dasavathaaram, 2008).

Today, the same characters and storyline keep undergoing ‘treatment changes’ with each passing Vijay film, with the result, like Rajinikanth before him, his producers also want only one film every two years, and not 10 films the same year.

In southern Tamil Nadu’s ‘identity politics’ dotted with film history, yet another silver-screen star has begun adopting celluloid symbolisms of the kind that ‘superstar’ Rajinikanth had lately begun identifying himself with. While Rajini’s co-characters, story concept and socio-political settings of the events may be attributed to his public declaration of entering electoral politics in time for contesting the state assembly polls of 2021, the same cannot be said of ‘Thalapathy’ Vijay -- at least, not yet.

The reference is to Vijay’s Diwali offering Bigil, translating as ‘whistle’, in reference to his character as a super-duper football player and later on, coach of the state women’s team. Incidentally, Bigil is also the pet name of the younger Vijay’s character in a father-son dual-act.

Story-telling in Bigil is better than those of the sport genre, which has become a periodic feed for Tamil cinema in recent years. For director Atlee Kumar, it is the third film in a row with ‘Thalapathy’, or ‘general’, a title that had earlier stuck to Rajinikanth after his role akin to that of Karna in the Mahabharat, in Mani Ratnam’s film by the same name which hit the screens in 1991.

Today, when Rajini’s sobriquet for his fans is ‘Thalaivar’ (leader), as different from ‘Thala’ (head/leader) for another Vijay-generation super-star, Ajith Kumar, again after his character in the 2001 block-buster Dheena.

While at one stage Rajinikanth’s fans did not like the idea of Vijay’s fans ‘stealing’ the title ‘Thalapathy’ for referring to the younger actor, they were only happy to identify their own super-star as ‘Thalaivar’, or leader. In recent years, the ‘Thala-Thalapathi’ social media fan-fight at times ends up hitting below the belt, though in real terms both stars are very private persons, with Ajith Kumar even making it a pre-condition that he would not attend the promo events for his films.

Between the two, who have not been paired in any film but are often compared for their box-office image and successes, Vijay has come under greater pressure of the kind, but also from those outside of the film industry, including successive state governments of the AIADMK kind.

It is thus that Bigil’s social backdrop has caused eyebrows to rise in circles that have been prompting Vijay to enter direct politics, through social media posts, both for and against the actor. If  Rajini’s recent offerings of Kabali (2016) and Kaala (2018) identified the protagonist’s character with Muslims, Dalits and other social underdogs, there was possibly an element of story requirement in the settings they were placed.

The story of Kaala revolves around Tamil indentured labour from the British era now settled in Malaysia. Likewise Kaala is about Tamil labour eking out a living in Mumbai’s overcrowded Dharavi area, considered Asia’s largest slum.

Through social media, Rajini fans cited the symbols and colours in the two movies to claim that the superstar was identifying with the oppressed classes of Indian society, but both of them Tamil migrant labour incidentally.

Pa Ranjith, director of the two films, added fuel to such speculation through his social interactions and public speeches that it was the case after all.

While the two stories were thus about social underdogs, Kaala especially showed Rajini in the company of Muslims, as if to send home a political point as well.

In comparison, Vijay’s Bigi does more than that, but sticks to a storyline that is about underdogs of the Kaala variety and keeps talking about uplifting them and empowering them, too. If typical action sequences are there, they are woven into the storyline even better.  Here, director Atlee Kumar seems to have scored.

But what pervades the movie throughout are religious and caste symbolisms, again integrated into the script for most parts that it does not actually show as much, unless one is looking for it, and at it.

Thus, the main character, Michael, and his father Rayappan, both obviously Christians, have a team of aides (call them goons or playmates or whatever), one a Rowther (Muslim) and another, a bald man with his forehead plastered with holy ash, which is readily identified with Hinduism.

Of course, Rayappan, the father, appears in a saffron dhoti/lungi, which is no more identified only with Hindutva groups, as most non-Hindutva Hindus going on the annual Ayyappan pilgrimage to the Sabarimala shrine in Kerala do sport that colour through the year.

Some Christian priests and nuns in the state and across the country too have been sporting saffron/brownish saffron for long, but this is possibly the first time a movie character with a Christian name is seen doing so.

As if this were not enough, the father character is simultaneously shown wearing Hindu religious marks of holy ash and kumkum on his forehead, which should be welcome in these years of communal discord, visible and hidden, across the state as elsewhere in the country.

However, some Hindutva groups do not seem pleased. Without referring to these positive messages to communal harmony, if they are, some social media groups have highlighted the Brahminical caste identity of a married football player, who had to take early retirement because of the conservative practices of her inlaws. 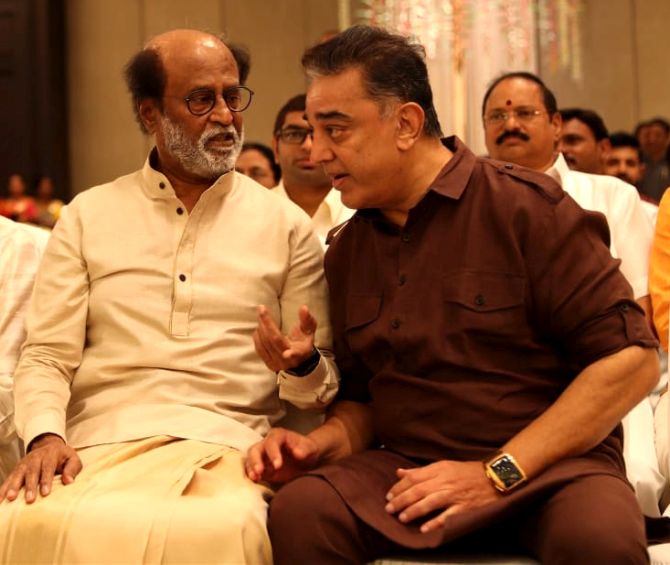 That the film is also about the characterisation of Bigil / Michael and his ability to convince even traditional families into accepting women’s empowerment as part of the ongoing process of social transformation has not been acknowledged.

Nor does Michael similarly talking to another woman player who had shut herself from the world after a guy she had turned down threw acid on her face, seems to have impressed them.

As the storyline takes shape in the climax, Michael, the coach, uses the two girls effectively, and the married one with the care of a committed brother who would not allow her to be a part of the ‘playing eleven’ as she had been found to be three months pregnant, yet uses her to score the clincher in the last chance of the penalty shoot-out.

So focussed has been the centre-right criticism of Vijay over the past years that some of them have been constantly pointing to his using his full name, Joseph Vijay, in the name-card of films lately, and his displaying his neck chain with a cross, almost constantly on screen.

The film’s box-office collection, according to trade reports, has surpassed the entire global collection (Rs 222 cr) of Rajini’s Petta in just nine days. In between, Bigil had surpassed the worldwide collection of Ajith’s hit movie of the year, Viswasam (Rs 188 cr).

In the post-MGR, post-Sivaji Ganesan era in Tamil cinema, here is one film for which there was a special, 7 am show in the second weekend Sunday. And the fan interest is not likely to vanish overnight, though gone are also the days of 100-day and silver jubilee runs for Tamil films, as used to be in the previous century.

Where then is the problem, because even from a Hindutva viewpoint, Bigil’s characterisation has only highlighted symbols of Hinduism, and also underlines social uplift, social empowerment, et al. If other films by other Tamil actors have sought to give the impression that there is a ‘Us vs Them’ flow in some dialogues that are super-imposed on a script which could have rested even without those interpolations, Bigil does not have any, even when there is scope for doing so.

The story itself is about the Tamil Nadu (women’s) football team winning the Nationals with Michael as coach. There is nothing to suggest that all other teams were ‘anti-Tamil’, barring the occasional field-level fouls that are region and religion-neutral in such circumstances.

It’s an honour that Michael could not win in his playing days, and there was enough scope for him, or any other character among his henchmen, or even the emotive girls, shouting about ‘anti-Tamil’ sentiments in other teams or their members. It has remained a ‘no-no’ in this film.

Where then is the question of the possibility of Vijay entering politics, in Rajini’s footsteps in the same way he has adopted Rajini’s filmi symbolisms, which date back to his Baasha (1995) days. In the film, Rajini’s character Manickam adopts the name of his Muslim friend Baasha, which otherwise is the story of a Mumbai don, who drops them all at the word of his dying father.

For close to a decade now, Vijay has been in the news for all the wrong reasons, as the AIADMK government of late chief minister Jayalalithaa was seen as stalling his filmi progress, through last-minute restrictions of his film’s releases.

The Jayalalithaa government also withdrew sanction for Vijay fans to celebrate his birthday in a grand, gala way some years ago.

Now, in the case of Bigil, though no direct interference or inference could be mentioned, state information minister, Kadambur K Raju, tried stalling additional, special shows for the festive season of the film which hit the screen two days before Diwali; he did explain that they were only regulating the number of shows and formulating guidelines that would apply to another Diwali release, namely, actor Karthi’s Kaithi (Prisoner).

In between, off and on, and ahead of most of Vijay’s recent film releases, his father S A Chandrasekharan, often told the local media how they were facing pressure of one kind or the other, affecting business, at times.

SAC, who made Sattam Oru Iruttarai (1981), the Tamil original of the Hindi movie Andha Kanoon (1993) starring Amitabh Bachchan and Rajinikanth, and also scores of other Tamil hit movies of the seventies and eighties, has also been dropping hints from time to time about Vijay’s political entry being made imminent by others, so to say.

Vijay has never denied his father’s hints, nor has he ever attested them. With the result, indications are that Vijay may follow instead in Rajini’s footsteps of letting his films talk politics, as long as possible -- but much less than Rajini in his heyday -- and decide on his direct entry, on a later day, if at all.

That way, if critics, other than knowledgeable film critics, are going to join issue over his films, so far so good for the actor who, unlike many of his generation, and more so unlike Rajinikanthn the superstar, has had a long bad patch in film career, still stayed back, fought back, and come back as one of the box-office success stories of contemporary Tamil cinema, nay, south Indian cinema, and perhaps the rest of it too.