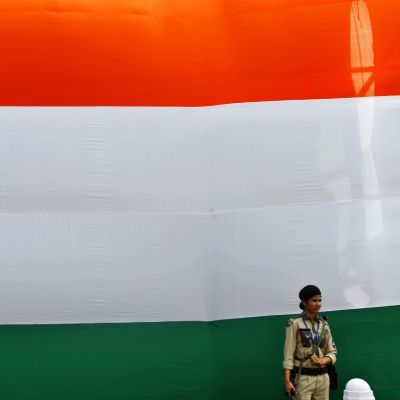 Tragic as it is, the submarine accident is more tactical in nature and it is the deeper strategic malaise across the board -- political, economic, security, judiciary, bureaucracy and even the media -- that has led to this dark mood of gloom and despondency, says Commodore (retd) C Uday Bhaskar.

The mood across India is so bleak as the nation celebrates it 66th Independence Day that even President Pranab Mukherjee has to draw attention to the prevailing cynicism. And this has been given a tragic underpinning by the unprecedented accident on board the navy’s submarine, the INS Sindhurakshak, in the run-up to August 15.

Tragic as it is, the submarine accident is more tactical in nature and it is the deeper strategic malaise across the board -- political, economic, security, judiciary, bureaucracy and even the media -- that has led to this dark mood of gloom and despondency. Almost every institution in India that contributes to the great Indian democratic experience now stands tainted -- and the developments of the last year are illustrative of this malignancy.

The political establishment has not covered itself with glory over the last decade and the current focus on rampant corruption that involves revelations by senior civil servants (the Ashok Khemka case) is perceived to be the tip of a very murky iceberg. A sleazy nexus between politicians, bureaucrats and the criminal mafia -- be it sand or builders or kerosene among others is slowly being exposed and faith in the integrity of the political class is fast eroding.

This trend has been further strengthened by the manner in which the Indian political class has closed ranks and is now seeking to overturn a Supreme Court verdict that would prevent people in police or judicial custody from contesting elections. The spirit behind the judicial verdict was to cleanse the legislature of its criminal/transgressor component --and weaken the increasing criminalisation of politics and the politicisation of crime. Ironically but predictably, on Tuesday (August 13) at an all-party meeting in Delhi , major political parties agreed to a rare consensus -- to resist the Supreme Court and use their legislative prerogative to amend the Representation of the People Act.

The higher bureaucracy in India has always been seen to have enabled the current deterioration in governance and I recall a conversation with the late Nirmal Mukherjee -- cabinet secretary to three prime ministers -- (1977-80) and the last of the ICS cadre, who observed sadly that the Indian Constitution had empowered the District Magistrate (IAS), the District Superintendent of Police (IPS) and the District Judge with adequate powers to stem institutional corruption -- but alas, many of these officials had chosen the more attractive option of ensuring their self-interest than discharging their duties objectively and fearlessly.

The increased distortion in political rectitude and lowering the benchmark to overlook corrupt practices is traced to the Sanjay Gandhi phase of Indian politics and this is a virus that has acquired frightening tenacity in recent years. If the legislature and the electoral cycle represents the ugly aspect of money and muscle power prevailing through the cynical manipulation of caste, community and religion -- the judiciary has also been found wanting.

If a democracy is assessed by its ability to respect the law and deliver justice to its citizens, the Indian track record is dismal and frightening. For a population of over one billion -- more than 30 million cases are awaiting disposal in different courts and the quality of justice dispensed and the time taken for verdicts to be delivered provides little comfort to the honest citizen.

Charges of collusion between legal officials and lawyers in lower courts is scandalous but the higher judiciary is also culpable. In a candid admission, Chief Justice of India Justice P Sathasivam noted in a media interview just before assuming office that the “Judiciary is not untouched by corruption.” While this has been conveyed in a very elegant and restrained manner, those familiar with the entrails of the higher judiciary in India admit hat the situation is now beyond redress. A very sad admission indeed.

The current economic and fiscal situation in the country is equally depressing. While the macro-economic and fiscal deficit are the domain of the experts, for the common man, it is the slide of the rupee, now 61 to the US dollar and the price of onions -- rupees 80 per kilo that matter. Investor confidence is low and the flight of ‘hot’ money and current government policies have caused deep anxiety -- both within India and those abroad.

Current fiscal policies are seen as profligate and the second term of the UPA government which had generated hope about major structural reforms and improvement in human security indicators have been dashed. As a result India has the ignominy of being among the lower rung of nations when it comes to food security, health, education and sanitation. The now forgotten mid-day meal tragedy is reflective of the inability of the system to even protect the health and lives of its most vulnerable.

The security spectrum also offers little cheer. The current tension with Pakistan, the provocation from China, the internal security fabric where the CBI and the IB are at odds and the most recent communal clashes in J&K repeatedly point to an ineffective national security apex. Yes, there have been success stories -- such as the launch of the aircraft carrier, Vikrant and the commissioning of the nuclear reactor on the Arihant -- but these are exceptions to the rule.

Seven decades after attaining independence, the Indian military is still outside the policy making loop and at the executive level, the defense and security of India are the responsibility of the defence secretary! The three service chiefs are policy “invisible” and the political class has rarely had the time or the inclination to address this with any determination. And if the status of a soldier is an indicator of how a nation and its people view national security -- then the current legal tussle of the Indian ex-serviceman with his own government is illustrative.

In this gloomy review, the last institution -- the national media has also come in for adverse scrutiny. If providing factual information in a sustained and objective manner is critical to a vibrant democracy, then the revelations made in the Radia tapes episode should call for deep introspection about the nexus between the market and the media.

What then is the way ahead on Independence Day? As an optimist and one who represents the aspirations and anxieties of a common, middle-class citizen -- the plea is to restore institutional integrity, build tangible national capacity and restore faith in the idea of a truly democratic India -- a vision that was articulated 66 years ago from the ramparts of the Red Fort by the first prime minister. His illustrious successor must rise to the challenge.